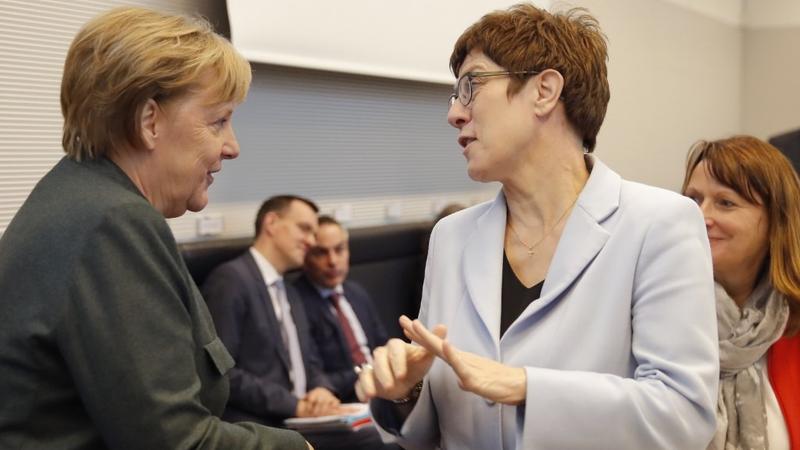 German Chancellor Angela Merkel (left) talks with Annegret Kramp-Karrenbauer, leader of their conservative Christian Democratic Union party, as they arrive for their CDU/CDU parliamentary group meeting at the Bundestag (lower house of parliament) in Berlin on Feb 11, 2020. (ODD ANDERSEN / AFP)

Chancellor Angela Merkel’s Christian Democratic Union postponed next month’s party conference because of the spreading coronavirus, throwing the race for a new party leader into uncertainty at a time of political and economic turmoil.

Outgoing CDU chief Annegret Kramp-Karrenbauer informed party executives that the scheduled April 25 meeting in Berlin “will not be able to take place,” according to a statement Thursday. The party convention will be rearranged “as soon as the situation around this epidemic permits it.”

The move prolongs the uncertainty over who will become the next CDU leader and potentially take over from Merkel as the next chancellor. The need for a new party chair was triggered by a political crisis that forced Kramp-Karrenbauer to step aside last month.

Merkel critic Friedrich Merz and loyalist Armin Laschet are the leading contenders to take the top job. The new party chief will very likely run as a chancellor candidate in the next national election, which is due in autumn 2021.

The decision to postpone the party convention came just one day after Merkel said Germany will do whatever is required to limit the impact of the coronavirus.

Europe’s economic powerhouse was already flirting with recession even before the outbreak and leading economists have warned that the crisis could cause a contraction.