HK next up in world's growing list of stock bear markets 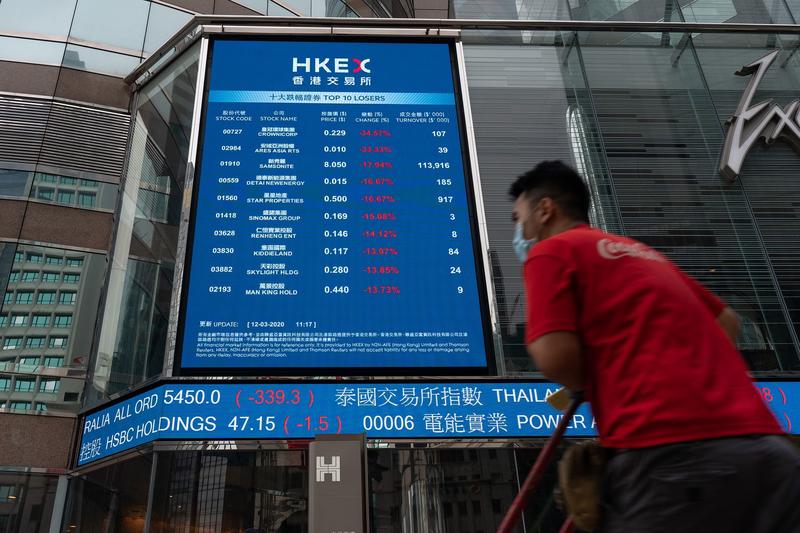 Hong Kong stocks staved off entering its second bear market in as many years on Thursday, as investors around the world succumb to fear that the  coronavirus outbreak will derail global economic growth.

The Hang Seng Index fell as much as 4.4 percent, briefly taking its losses since an April peak to 20 percent, before ending down 3.7 percent. Dropping 0.8 percent on Friday will put the benchmark in bear territory, leaving just the Chinese mainland and Taiwan as among the world’s 20 biggest stock markets not there. India equities are poised to end Thursday in a bear market, where on Wednesday the Dow Jones Industrial Average finished in the US.

The Hang Seng Index fell as much as 4.4%, briefly taking its losses since an April peak to 20%, before ending down 3.7%. Dropping 0.8% on Friday will put the benchmark in bear territory

Providing some support Thursday to Hong Kong stocks was record net buying of HK$12.7 billion (US$1.6 billion) by Chinese mainland investors, topping the prior high set in February 2018, according to data compiled by Bloomberg. Still, a bear market may just be a matter of time.

The Hang Seng briefly recovered all its protests-driven losses in January, right before an outbreak of the coronavirus. The outbreak has since weighed on markets around the world, while stimulus measures from governments and central banks fall flat. The Hang Seng China Enterprises Index closed down 3.4 percent Thursday, leaving it 18 percent from its 2019 high.

It’s been a terrible few months for Hong Kong’s economy, with the virus outbreak and subsequent quarantine requirement for those coming from the Chinese mainland resulting in tourist levels falling to nearly zero in early February. Hong Kong’s slump in retail sales has continued into 2020, and the overall economy is expected to shrink for a second year, something it’s never done. The city was pushed into recession last year due to months of social unrest.