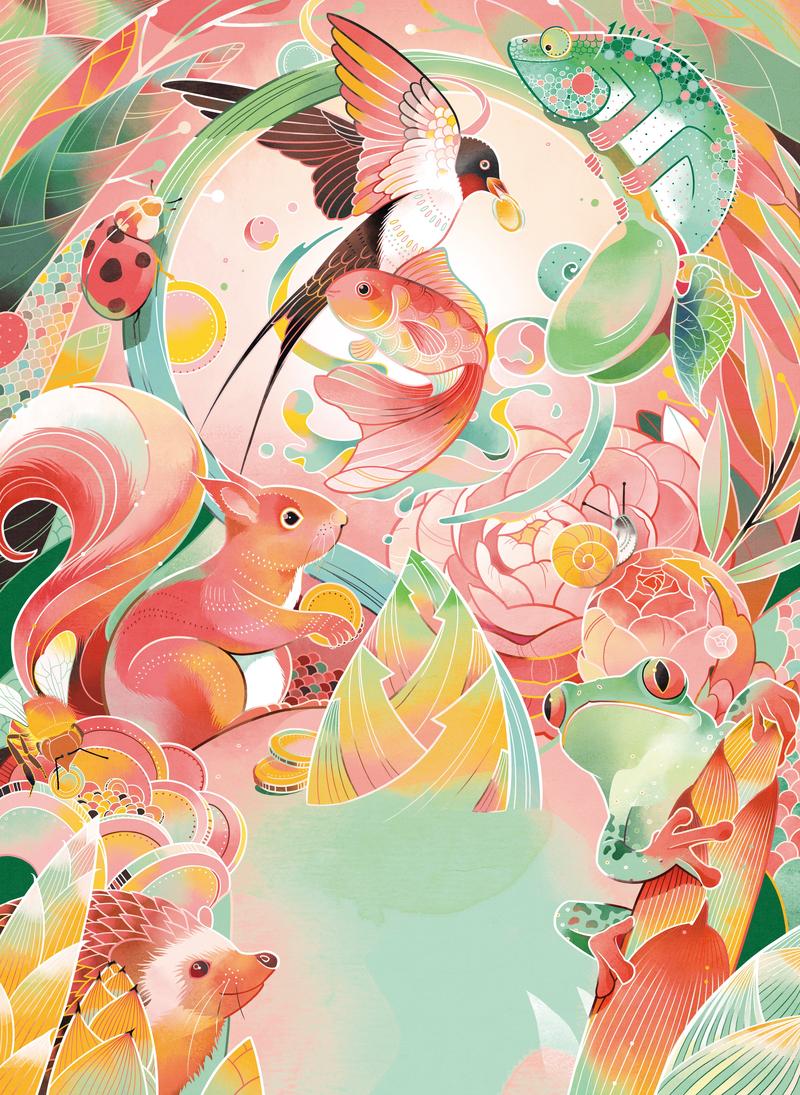 The Chinese economy could be poised for strong recovery in the second quarter as the nation gets back to work, according to experts.

Businesses, particularly small and medium-sized enterprises in service sectors like retail and hospitality, have been hit hard by the novel coronavirus pneumonia outbreak as people stay at home.

The extent of China’s recovery may also depend on how badly affected the global economy is by the virus, with increasing numbers of cases, including fatalities, being reported around the world.

JPMorgan Research, the research arm of US banking giant JPMorgan Chase, predicted that China will grow by 15 percent quarter-on-quarter in the second quarter after contracting 3.9 percent in the first on the same quarter-on-quarter basis.

Jing Ulrich, vice-chairman of global banking and Asia-Pacific with JPMorgan Chase, believes such a rebound would demonstrate the core strength of the Chinese economy.

“China’s ability to overcome the current crisis and continue on with long-term plans will demonstrate national resilience,” she said. “Although the resumption of work has been slower than anticipated, we expect that economic activities will rebound from late March and into the second quarter.”

The first quarter has been dominated by protracted factory shutdowns with many businesses not opening after Chinese New Year, having a severe impact on global supply chains.

China’s manufacturing purchasing managers’ index slumped to 35.7 in February, the lowest level on record, from a neutral 50 in January, according to China’s National Bureau of Statistics on Feb 29.

However, businesses are gradually returning to some level of normality.

In Zhejiang, the eastern province renowned for its entrepreneurial culture, more than 90 percent of companies with revenues above 20 million yuan (US$2.9 million) had resumed operation, according to provincial government data released on Feb 28.

In Guangdong, China’s manufacturing heartland, 82 percent were up and running, while the figures were 73 percent in Shanghai and 61 percent in Beijing. The national average resumption rate was 67 percent.

President Xi Jinping has repeatedly emphasized since Feb 23 that the orderly resumption of work and production is required without compromising efforts to prevent and control the spread of the virus.

At a March 4 meeting, Xi said consumer demand needs to be unleashed and socioeconomic development should be brought back to a normal track at an early date.

Imogen Page-Jarrett, a research analyst in Beijing for The Economist Intelligence Unit, predicted the Chinese government would have the virus under control by the end of this month.

“At this point, the authorities will be able to lift quarantine measures and economic activity will begin to normalize. Factories will return to full output levels and all employees will return to work,” she said.

“However, should a large-scale outbreak occur in another province outside Hubei, the origin of the coronavirus, it would take longer for the authorities to manage. There is also a risk of it being re-imported from (other affected) countries like South Korea.”

Page-Jarrett said that not all sectors of the economy will be hurt by the outbreak.

“Firms offering online services like gaming, education and e-commerce are likely to see a strong pick-up in their business, given that people are staying at home and spending more time on their phones,” she said.

Katarina Zakic, research fellow at the Institute of International Politics and Economics in Belgrade, Serbia, said the strength of China’s recovery will depend on how long it takes to fully control the epidemic. 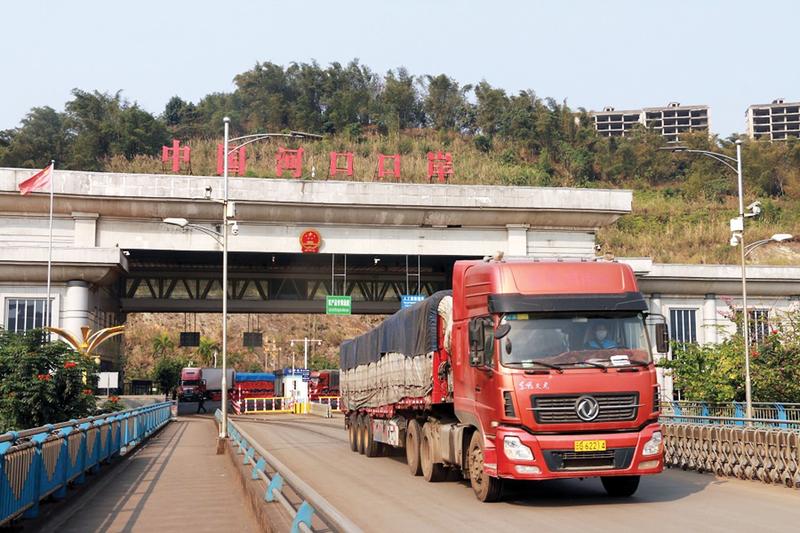 Cross-border traffic gets back to normal at Hekou port in Southwest China’s Yunnan province. All 19 border markets in Yunnan with Myanmar, Vietnam and Laos resumed trade amid the COVID-19 outbreak, according to the Yunnan Provincial Department of Commerce. Experts predict that Chinese economic activity will normalize from late March. (WANG CHAO / for CHINA DAILY)

Xi said in his Feb 23 speech that despite the epidemic setback, it was still important to achieve this year’s goals and tasks for economic and social development. By the end of 2020, China aims to become a “moderately prosperous society” and eliminate all extreme poverty in time for the 100th anniversary of the CPC next year.

To meet the first of these targets, it must double the country’s 2010 per capita GDP, which would require this year’s economic growth to reach between 5.5 and 6 percent.

China normally sets its target for GDP growth in the Government Work Report, which is delivered by the premier at the opening of the National People’s Congress, part of the annual two sessions political meeting, in early March. This year’s meeting was postponed due to the outbreak.

December’s annual Central Economic Work Conference, attended by China’s leaders, did, however, indicate a target of “around 6 percent” for 2020, compared to the 6 to 6.5 percent range for 2019.

Stephen Roach, a leading US economist and senior fellow at Yale University’s Jackson Institute for Global Affairs, insisted the economy could still be on track. “China’s longer-term growth and development aspirations remain very much intact, in my opinion,” he said.

Roach added that this depends on four key factors: shifting growth from exports and investment to private consumption; rebalancing from manufacturing to services; building a social safety net; and focusing on indigenous technological innovation.

“If China stays the course with these while maintaining focus on the current deleveraging campaign in an effort to avoid a Japanese-style debt problem, its twin centenary goals remain achievable in my view.”

“Policy measures to stem the viral outbreak are not about juicing growth. Indeed, measures are proving critical in keeping China’s estimated 18 million SMEs afloat and limiting the impact on employment through this period of disruption,” he said.

A major concern is the epidemic’s impact on the global economic outlook, with any downturn certain to feed back into China. The Organization for Economic Cooperation and Development on March 2 halved its forecast for global growth this year from 3 to 1.5 percent.

The outbreak coincides with the global economy enjoying one of the longest, if still quite anemic, upswings in economic history, with many experts expecting a correction at some point.

Nobel Prize-winning economist Paul Krugman believes the virus has the potential to trigger a recession. “Sooner or later something will go wrong. The coronavirus could be that event, but if it isn’t, something else will come along,” he said.

“And the big problem is lack of ammunition. Central banks don’t have remotely enough room to cut, and fiscal policy is paralyzed by ideology in much of the advanced world. So we’re very vulnerable.”

Some believe that while the outbreak is a short-term setback, it could be a major business opportunity for China. Huge investment in drugs and vaccine research to combat infections is likely, and China could potentially lead the world in this area.

A new emphasis on biosecurity — to identify potential infections and track people’s movements — is also expected.

Edward Tse, CEO and founder of management consultancy Gao Feng Advisory, said he expected a major shift of emphasis toward “so-called big health, pharmaceuticals and health services”. “There will be more focus on early detection and early prevention as well as diagnostics and treatment,” he said.

Andy Wynn, managing director of TTIP Consulting, a UK consultancy specializing in innovation, said the crisis highlights the importance of the biomedical, pharmaceutical and healthcare industries in containing outbreaks.

“There is no doubt that this situation is bringing emergency funding into the healthcare sector not only within China but also in the EU and US, to rapidly develop new treatments and aftercare techniques, but also more importantly in terms of prevention,” he said.

Although some media coverage of the virus may seem apocalyptic, history points to economies recovering rapidly from incidences like this.

David Routt, assistant professor of history at the University of Richmond in the US, has done extensive research on the plagues of medieval Europe, which were often followed by economic booms.

Much closer to today, there was strong economic recovery following the SARS epidemic in 2002.

Ulrich of JPMorgan Chase, who worked in the investment field during SARS, said the omens from that outbreak give rise to optimism about the current one.

“If you look at corporate earnings during the time of SARS, you had a lot of downward revisions for about three months after the peak of the outbreak, which were then followed by a fairly quick recovery,” she said.