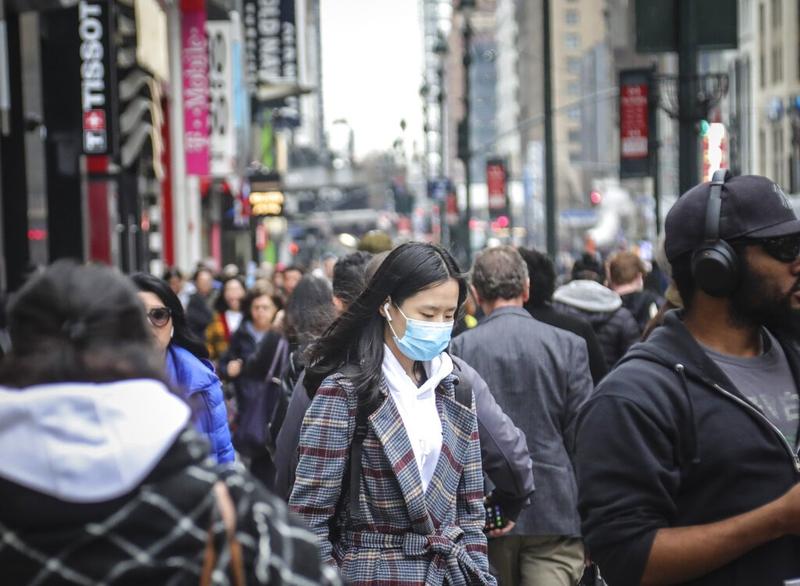 A pedestrian wears a surgical mask on a busy street in mid-town Manhattan, as concerns grow around COVID-19, March 3, 2020, in New York. (BEBETO MATTHEWS/AP)

WASHINGTON/LONDON/PARIS/ROME/BERLIN/MEXICO CITY - US President Donald Trump has signed a bill to provide US$8.3 billion to ramp up the nation’s response to an outbreak that has now killed 15 Americans, as more than 100,000 confirmed cases of the novel coronavirus disease have been reported globally as of Saturday morning.

World Health Organization (WHO) spokesperson Tarik Jasarevic said that among those confirmed infections, 3,484 patients have died.

The funding measure Trump signed includes over US$3 billion for research and development of vaccines, test kits and medical treatments, US$2.2 billion to aid public health activities on prevention, preparedness and response, and US$1.25 billion to help international efforts aimed at reining in the virus.

Meanwhile, US financial regulators are preparing contingency arrangements, including travel restrictions and home-working, to ensure they can effectively oversee the financial markets as the coronavirus closes in on the US capital.

On Friday, US officials said the first three cases of the flu-like disease had been diagnosed in Montgomery county, Maryland, home to thousands of federal workers who travel in to offices in nearby Washington daily.

Agencies including the Commodity Futures Trading Commission (CFTC), the Securities and Exchange Commission (SEC), and the banking regulators also have offices in New York, San Francisco and New Jersey where other cases have been reported.

On Friday, seven states - Pennsylvania, Indiana, Minnesota, Kentucky, Oklahoma, Nebraska and South Carolina - reported their first cases, meaning more than half of the 50 US states now have the virus

The derivatives watchdog has canceled some foreign travel and is allowing essential overseas trips on a case-by-case basis.

Reuters also reported on Friday that the US Federal Reserve had taken the unusual step of quarantining US dollars it receives from Asia for up to 10 days.

On Friday, seven states - Pennsylvania, Indiana, Minnesota, Kentucky, Oklahoma, Nebraska and South Carolina - reported their first cases, meaning more than half of the 50 US states now have the virus.

Cases in New York jumped to 44 from 22, Governor Andrew Cuomo said on Friday, adding that some 4,000 people in the state were under precautionary quarantine and 44 under mandatory quarantine.

Organizers of South by Southwest canceled this year’s arts, music and technology festival in Austin, Texas, citing concerns from city officials about the continuing spread of the coronavirus. 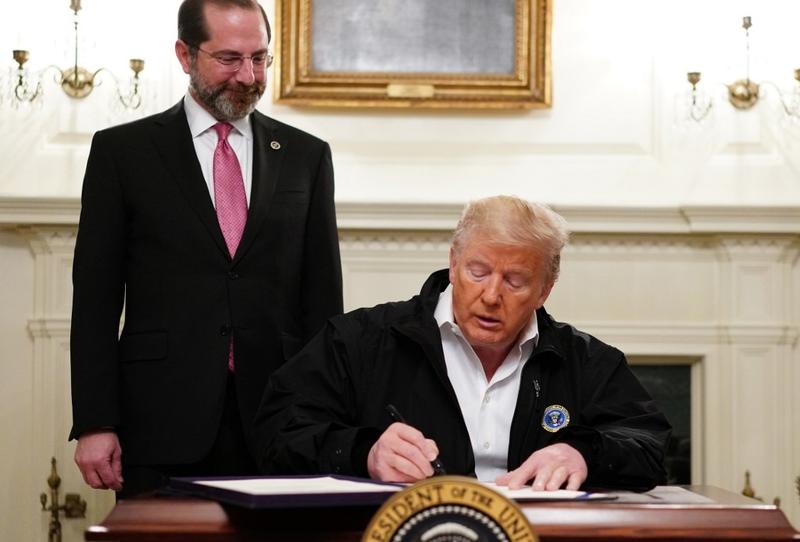 US President Donald Trump signs a US$8 billion emergency funding bill to combat COVID-19 in the Diplomatic Room of the White House in Washington, DC on March 6, 2020. (MANDEL NGAN / AFP)

A second patient in England who tested positive for coronavirus has died.

The affected workers are recovering in isolation at home, British Airways parent IAG SA said Friday in an email. A small number of the luggage handlers’ colleagues are also being tested, a person familiar with the matter said.

The number of confirmed coronavirus cases in the UK jumped to 163 from 115.

Facebook said on Friday it is closing its London offices until Monday after a visiting employee from Singapore was diagnosed with coronavirus.

The death toll from an outbreak of coronavirus in Italy has risen by 49 to 197, the largest daily increase in fatalities since the contagion was uncovered two weeks ago.

The death toll from an outbreak of coronavirus in Italy has risen by 49 to 197, the largest daily increase in fatalities since the contagion was uncovered two weeks ago

The cumulative number of cases in the country, which has been the hardest hit in Europe by the epidemic, totaled 4,636 compared with 3,858 on Thursday.

The leader of Italy’s co-ruling Democratic Party Nicola Zingaretti said on Saturday he had tested positive for coronavirus.

“I have coronavirus too”, Zingaretti said in a video posted on Facebook, adding he was in self-isolation at home and that all the people he had been in contact with in the latest days were being contacted for checks. He said he was well.

The number of coronavirus patients in Germany stood at 684 on Saturday morning, the country’s public health agency said, an increase of 45 over Friday evening.

The cases are concentrated in the west and south of the country, with 346 in the state of North Rhine Westphalia and over 100 each in the southern states of Bavaria and Baden-Wuerttemberg, where the country’s initial cases were registered.

Austria is introducing “spot” health checks at its border with Italy for two weeks as of next week in response to the coronavirus outbreak, Chancellor Sebastian Kurz said on Friday.

The first case of COVID-19 has been confirmed in Malta, Health Minister Chris Fearne said Saturday.

The patient is a 12-year-old Italian girl who lives in Malta. She had visited northern Italy in late February and early March with her family, before returning to Malta. 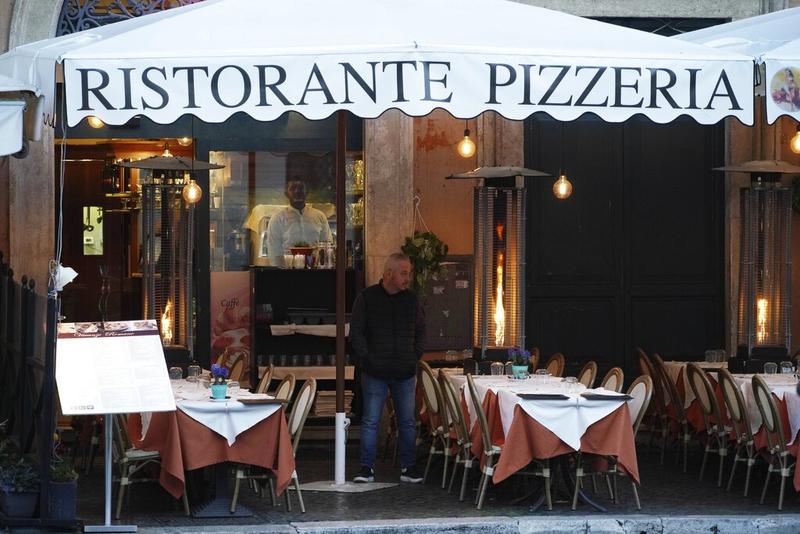 A restaurant waits for customers in Navona square in Rome, March 6, 2020. (ANDREW MEDICHINI/AP)

“On the issue of checks, health checks at the border, you can picture it this way - of course the police is in charge of deciding which cars it makes sense for and for which it does not, particularly on the basis of license plates,” Kurz told a news conference with his interior and health ministers.

France will close nurseries and schools for 15 days from Monday in the two areas most hit by coronavirus infections, one north of Paris and the other in the northeastern part of the country.

France’s Health Ministry said on Saturday that two more people had died from the coronavirus, bringing the total death toll to 11 people.

One of the two fatalities was confirmed in the northern part of France, the other in Normandy, the ministry said in a statement.

France has now 716 confirmed cases of coronavirus an increase of 103 compared with a day earlier, the ministry said.

Pope Francis has canceled his main public appearances to avoid crowds gathering to see him and will stream them on the internet from inside the Vatican because of the coronavirus outbreak in Italy.

The Vatican said that on Sunday he would not address crowds from a window overlooking St. Peter’s Square and would not hold his general audience there either on Wednesday.

Four Russian nationals have tested positive for the novel coronavirus in the last 24 hours, bringing the number of COVID-19 cases in Russia to 14, the country's coronavirus control and prevention task force said Saturday.

Spain on Saturday confirmed the number of COVID-19 cases has risen to 441, with eight deaths in the country.

The region surrounding the capital city of Madrid remains the worst affected by the outbreak, with 174 confirmed cases, while there are 45 in the Basque region and 39 in the La Rioja region of northern Spain.

Mexican authorities on Friday said they have identified a sixth person infected with coronavirus, a 71 year-old man in the State of Mexico who recently traveled to northern Italy.

Deputy Health Minister Hugo Lopez-Gatell said the man, who suffers from hypertension, arrived in Mexico in “grave condition” and is currently hospitalized in stable condition.

They will be held without general public participation from inside the Vatican.

Costa Rica’s government on Friday said it confirmed its first case of coronavirus, in a 49-year-old woman from the United States who is in the Central American nation with her husband.

The instance marks the first confirmed infection of the fast-spreading coronavirus in Central America.

The World Economic Forum (WEF) has postponed a Latin America conference set to be held in Brazil at the end of April as a precautionary measure, with the number of confirmed coronavirus cases in the country rising on Friday to 13.

South Africa on Saturday reported the second confirmed case of coronavirus. The 39-year-old woman from Gauteng province has been diagnosed with the virus, Health Minister Zweli Mkhize said.

She had joined the same travel group to Italy as the first patient, according to Mkhize.

With inputs from Bloomberg, Xinhua