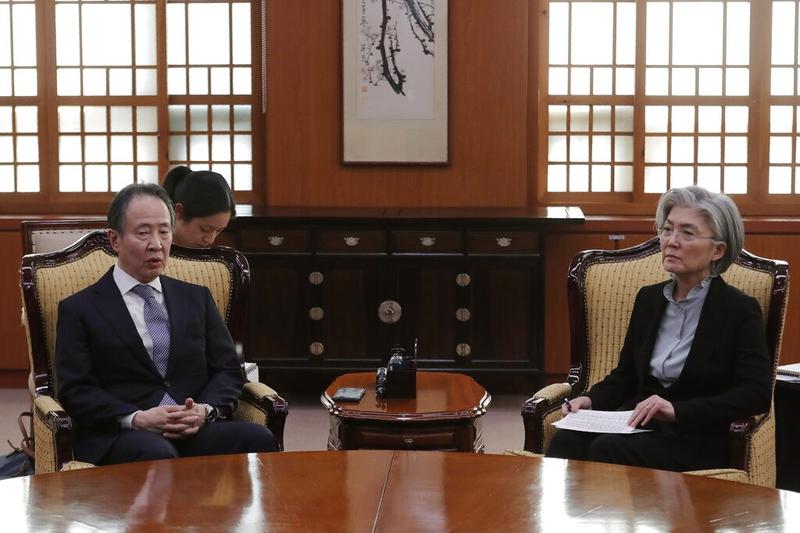 TOKYO/SEOUL - South Korea summoned Japan's envoy on Friday to protest against its neighbor's decision to quarantine South Korean visitors for two weeks, and threatened reprisals, as the bid to rein in a coronavirus ignited a new row, following a trade spat last year.

Japan on Thursday announced a dramatic tightening of border controls to combat the virus, including two weeks of quarantine for those arriving South Korea and China. It has also barred entry to visitors from highly affected areas in South Korea.

If the Japanese government does not withdraw their decision...we cannot help but devise necessary countermeasures, including reciprocal measures.

She condemned Japan's decision to impose the quarantine without sufficient consultation or prior notice, despite Seoul's efforts to persuade it against travel restrictions.

"We express deep regret towards the unjust measures taken by the Japanese government," Kang added.

Speaking through a translator, Tomita responded that Kang should be well aware of the worsening situation.

"The next two weeks are a critical time period that will determine whether or not we can put an end to COVID-19," he said, referring to the illness caused by the virus.

Tokyo faced "mistrust from the international community due to its opaque, passive" response to the coronavirus outbreak, the National Security Council (NSC) said after a meeting at the presidential Blue House earlier in the day.

"We will explore necessary countermeasures based on principles of reciprocity," it said in a statement.

“The decision was the result of a comprehensive review of the information available about the situation in other countries and the effects of other measures,” chief government spokesman Yoshihide Suga said at a news conference on Friday. “I think the timing is appropriate.”

The number of coronavirus cases in Japan stood at 1,057 as of Friday morning, according to national broadcaster NHK. Twelve people have died from the disease.

Relations between South Korea and Japan are already under strain by a dispute over wartime labor that has spilled into trade.