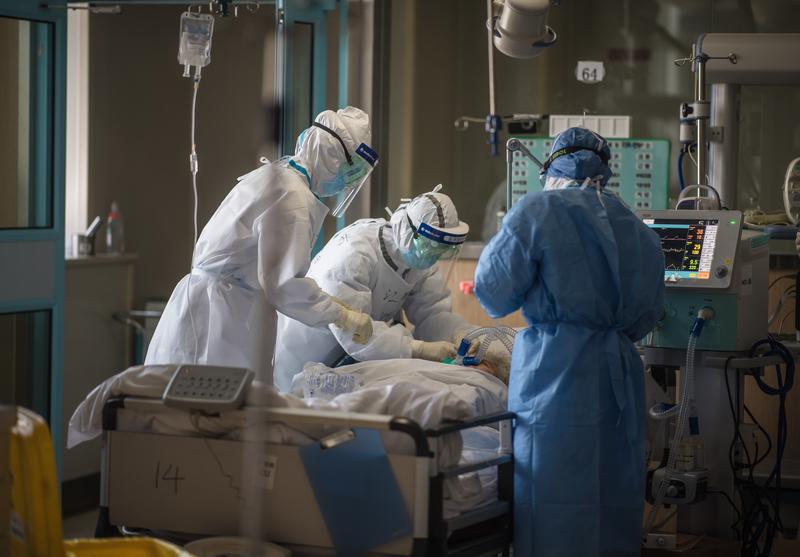 In this undated photo, medical staff members from Jiangsu province work at an ICU ward of the Wuhan No. 1 Hospital in Wuhan. (XIAO YIJIU / XINHUA)

BEIJING – The Chinese mainland reported three new confirmed cases of COVID-19 on Saturday outside Hubei province, the epicenter of the outbreak, according to the National Health Commission.

The health authority said Sunday it received reports of 573 new confirmed cases of novel coronavirus infection, including 570 from Hubei, and 35 deaths on Saturday on the Chinese mainland. Among the deaths, 34 were in Hubei province and one in Henan province, according to the NHC.

The overall confirmed cases on the mainland reached 79,824 by Saturday, including 41,625 patients who were discharged after recovery

Also on Saturday, 2,623 people were discharged from hospital after recovery, while the number of severe cases decreased by 299 to 7,365.

The overall confirmed cases on the mainland had reached 79,824 by the end of Saturday, including 35,329 patients who were still being treated, 41,625 patients who had been discharged after recovery, and 2,870 people who had died of the disease.

The commission added that 851 people were still suspected of being infected with the virus.

Thirty-three patients in Hong Kong, eight in Macao and nine in Taiwan had been discharged from hospital after recovery.

Hubei province reported 34 deaths on Saturday, according to the provincial health commission. The latest report brought the total confirmed cases in the hard-hit province to 66,907 and that of total deaths to 2,761.

The province also saw 2,292 patients discharged from hospital after recovery on Saturday, bringing the total number of discharged patients in the province to 31,187.

Among the 28,912 hospitalized patients, 5,858 were still in severe condition and another 1,249 in critical condition.