Epidemic easing at its epicenter

By Wang Xiaodong in Wuhan 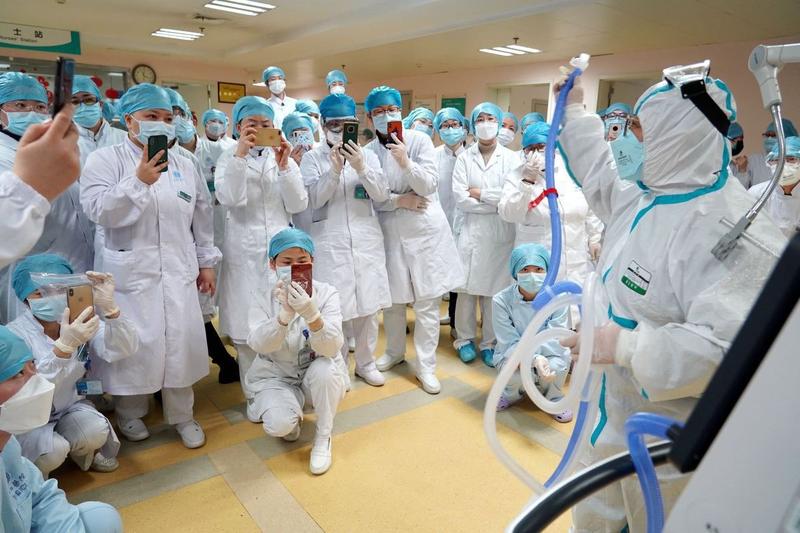 The novel coronavirus epidemic has been easing in China, including in the epicenter city of Wuhan, in Hubei province, but great uncertainties remain and epidemic control efforts must not become lax in any case, the nation's top health authority said on Friday.

"After arduous efforts, epidemic control in China is in a scenario of steady improvement," Ma Xiaowei, minister of the National Health Commission, said at a news conference in Wuhan. "But we cannot go backward by even one step, and we must lock the outbreak in Wuhan and Hubei firmly."

He asked medical workers in Hubei province, particularly in its capital, Wuhan, to use all their efforts to win the battle against the novel coronavirus to minimize risks to people in China and the world.

After arduous efforts, epidemic control in China is in a scenario of steady improvement

In Hubei province, the heart of the outbreak that has caused more than 2,700 deaths in China, the epidemic has been contained, except in Wuhan, said Liang Wannian, head of an expert team organized by the commission to cope with the epidemic. Liang spoke at the same news conference, organized by the State Council Information Office.

On Thursday, only five new confirmed cases of the coronavirus were listed for Hubei outside of Wuhan, down from the peak of more than 1,400 a day on Feb 12, he said. Meanwhile, patients who have recovered and been released from hospitals have outnumbered new confirmed cases every day for the past 13 days, he said.

In Wuhan, where the outbreak was first reported, the rising epidemic has been eased, with numbers for new confirmed cases, suspected cases and fatality rates all in decline, Liang said.

With increasing numbers of people returning to work after the Spring Festival holiday, and production beginning to be restored in many places, outbreaks may occur again in some places, he said.

Ma, health minister, said the ministry will continue its efforts to control the epidemic and successfully treat patients. All newly confirmed patients should be hospitalized for treatment on the same day their infection is confirmed, he said.

The commission will instruct local authorities on different strategies for control of the epidemic in different regions, including Wuhan, Hubei province and Beijing, in accordance with their epidemic risks.

Meanwhile, 19 provinces, municipalities and autonomous regions will continue to provide support to cities in Hubei province in treating patients, he said.

Liang said while areas outside Hubei may adopt flexible policies to balance epidemic control and economic development, places in Hubei, Wuhan in particular, should continue with strict quarantine measures.

Yu Xuejun, deputy head of the commission, said the commission has urged provincial authorities across China to draft an epidemic prevention plan and fully be prepared in order to ensure the effective identification and handling of any new cases that arise.

He called for authorities to intensify health monitoring of employees and assist workers in strengthening their ability to protect themselves, adding that the commission will dispatch teams to guide and inspect disease prevention and control across China to ensure outbreaks don't rebound.

China has mobilized national resources to cope with the biggest public health crisis over the past 70 years. More than 78,000 confirmed cases of the novel coronavirus had been reported on the Chinese mainland as of Thursday, with nearly half of those patients having recovered, according to the National Health Commission.

Guo Yanhong, a commission official, said at a news conference in Beijing on Friday that although some recovered patients that have been discharged from the hospital have subsequently tested positive for the novel coronavirus, so far they haven't been found to be infectious. Among those patients, some have had negative results in following tests, she said.

Cao Yin and Li Lei contributed to this story