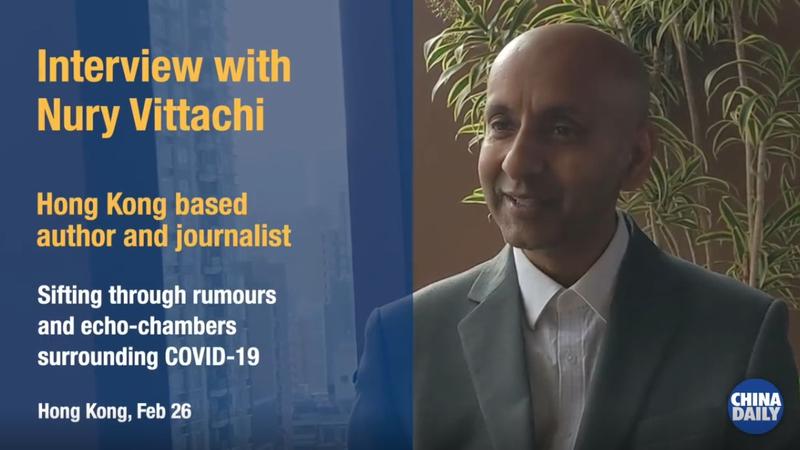 Hong Kong-based veteran journalist and author Nury Vittachi said anti-government lobbying is being carried out by “a group of troublemakers” who are spreading a lot of misinformation after months of often-violent protests and during the current novel coronavirus outbreak.

The Sri Lankan-born journalist, who is also the chairman of the Asia-Pacific Writers and Translators Association, told China Daily about his concerns over the dissemination of false information during the pneumonia epidemic. He said rumors were often mixed up with facts.

Earlier, there were rumors people would get free masks from police stations, which later proved to be untrue, he noted.

“Somebody duplicated the whole thing for delivering fake news. It’s clearly the anti-government lobby showing that,” said Vittachi, who is also a lecturer at the Hong Kong Polytechnic University.

“You can see so many of them are directed against the government,” he added.

Vittachi said it was similar during the recent extradition-bill protests — when misinformation and rumors occurred regularly. He believes the government faces a very difficult task in stopping fake news being spread. Sections of the media — both local and foreign — were also trying to undermine the government through sensational news reports.

The spokesman said that enquiries were from some residents who received an email invitation of an activity purported to be sent by the Chief Executive’s Office.

On Jan 28, Chief Executive Carrie Lam Cheng Yuet-ngor told a press briefing that she was concerned about the spread of “fake news” surrounding the coronavirus. Lam said it was hindering government efforts to combat the virus.

“This will seriously affect our work in preventing and controlling the epidemic, and will also cause unnecessary panic,” Lam said. “At the end, it will be Hong Kong residents who suffer.”

For the past few days, numerous government officials went to nursing homes and handed out masks, and civil servants routinely volunteer at quarantine centers, but it’s examples like what Vittachi says are not mentioned much in the news.

“I was at a think tank recently, and they said, ‘why don’t the civil servants go out and talk to the people?’ I said look at their schedule releases, they’re doing that! I have my own criticism of the government as well, but it can be overblown, sometimes,” he noted.

The prevalence of misinformation has fuelled hysteria and reveals hidden political agendas by “troublemakers”, Vittachi observed.

Some of the blame for the disorder must be placed on the media, many of whom are blatantly anti-government, he added.

Vittachi said an example of this is the media focus on the “rate of spread” of the COVID-19, rather than a declining fatality rate.

“The contraction rate is irrelevant, because the common cold, Influenza A, etc., have a high rate of spread — it’s the fatality rate that is crucial, and it’s currently around 0.2 percent, for people under 40”, he said, citing the number released on Feb 17 by the Chinese Center for Disease Control and Prevention.

“I live opposite a ‘Lennon Wall’, and the first thing that went up on it was, ‘Wuhan virus, brought to you by Chinese mainland’, the overly political people are using this for their own ends”, he said.

Vittachi also cited the example of the hospital workers’ strike in early February. The one-week strike was led by a newly established group, which made headlines in the local media for several days.

“But in fact they were quoting a tiny group of people, set up by some of the pan-democrats, and a part of the media goes along with it. It’s bad because it fools the public”, he explained.

The “pan-democrat” camp is setting up small unions within other sectors; and some media, being compliant, delivers that news as if it represents the whole sector, Vittachi added.