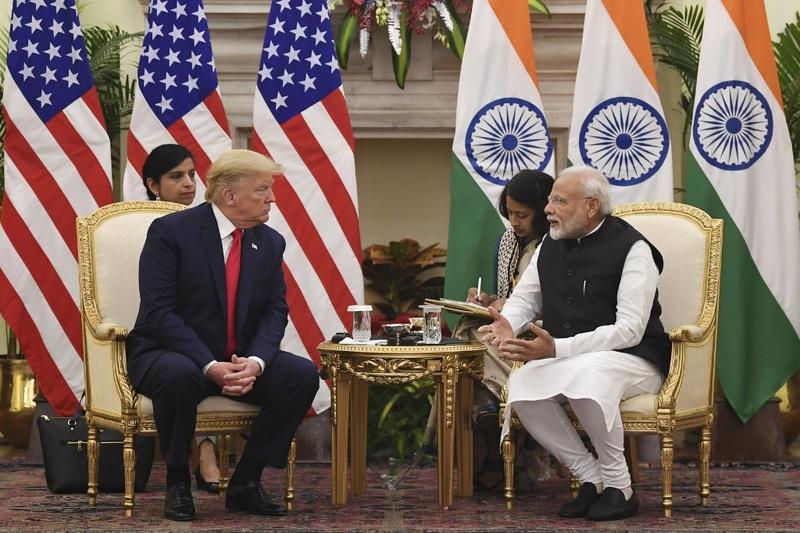 In this handout photograph taken and released by India's Ministry of External Affairs (MEA) on Feb 25, 2020, India's Prime Minister Narendra Modi (right) speaks during a meeting with US President Donald Trump at Hyderabad House in New Delhi. (PHOTO / AFP)

US President Donald Trump and Indian Prime Minister Narendra Modi have agreed to “promptly” conclude ongoing trade talks that they hope can lead to the first phase of a bilateral US-India trade deal, the White House said.

The statement follows Trump’s visit to India on Feb 24-25, during which the US president clinched the sale of US$3 billion of military equipment sale to India.

The statement follows Trump’s visit to India on Feb 24-25, during which the US president clinched the sale of US$3 billion of military equipment sale to India

"They (Trump and Modi) agreed to promptly conclude the ongoing negotiations, which they hope can become phase one of a comprehensive bilateral trade agreement that reflects the true ambition and full potential of the bilateral commercial relations", the White House said late on Tuesday, giving no details on what would be included in the deal.

Earlier on Tuesday, Trump criticized India for its high tariffs.

“India is probably the highest tariff nation in the world,” he said.

Ahead of his trip, negotiators from the two sides wrangled for months to narrow differences on farm goods, medical devices, digital trade and new tariffs.

“If the deal happens with India it will be at the end of this year and if it doesn’t happen then we will do something else,” Trump said on Tuesday.

The US president said the United States wanted to be treated fairly and given reciprocal access to India’s market.

Separately, his trip coincided with violent clashes in the Indian capital of Delhi between Hindu and Muslim groups over a new citizenship law in India, with the violence resulting in many deaths.