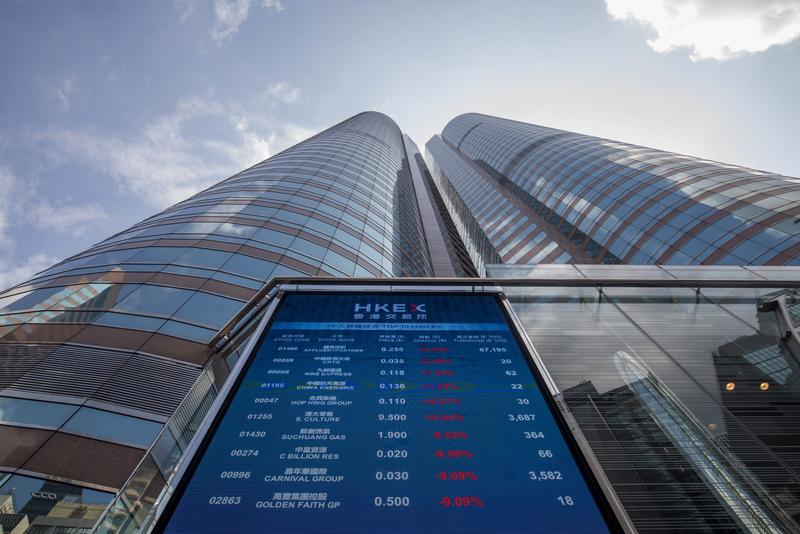 The Hong Kong stock exchange is closing its books on a tough 2019 as virus-fueled volatility boosts trading volumes to start the new year.

The exchange on Wednesday reported a 1 percent increase in net income and 3 percent gain in revenue in 2019, helped by a rise in initial public offerings as the bourse maintained its place as the world’s biggest IPO market. That allowed it to weather a 18 percent drop in trading - typically its main source of revenue - as the city was rocked by anti-government protests stemming from the extradition bill incident.

In early 2020, the tables have turned. Trading has boomed with investors rushing to adjust their portfolios to guard against the impact of the coronavirus, while IPOs have all but come to a halt. Looking ahead, the bourse needs to cement its role as a bridge to the Chinese mainland after a bid for the London Stock Exchange Group Plc failed and Alibaba Group Holding Ltd was kept out of its trading link with mainland exchanges.

“A surge in cash equities and derivatives trading activity due to heightened near-term market volatility, which boosts Hong Kong Exchanges’ revenue, should more than offset the impact of a weaker pipeline of IPOs,” said Sharnie Wong, a senior analyst at Bloomberg Intelligence. 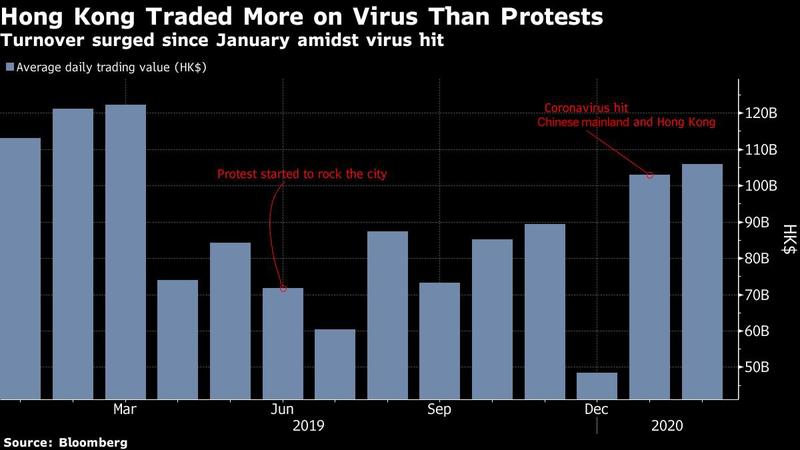 Trading exceeded HK$100 billion on 16 out of 20 days after the Chinese New Year holiday, up by at least 15 percent from last year.

Markets are reeling from the deepening coronavirus crisis, with Hong Kong stocks trading at the lowest evaluations in 16 years, but investors are seeing an upside for Hong Kong Exchanges & Clearing Ltd. Its shares are up 3 percent so far this year, adding to a 12 percent gain in 2019.

Trading exceeded HK$100 billion on 16 out of 20 days after the Chinese New Year holiday, up by at least 15 percent from last year

The exchange typically derives the bulk of its revenue from trading fees and tariffs, while fees from IPOs were just above HK$100 million in both 2017 and 2018, though it generates millions more from other types of listings. The financial hub has played a key part in allowing mainland investors access to selling and buying stocks, especially with Chinese authorities stepping in to limit selling earlier this month.

The trading boom comes as a welcome respite. Last year, the Hong Kong exchange was forced to ditch an unsolicited 29.6 billion-pound (US$38.4 billion) bid to buy the London Stock Exchange. The London bourse argued in its rejection that its Hong Kong counterpart was too geographically concentrated, while its business was too heavily exposed to market transaction volume.

News earlier this month that Alibaba, which made a massive US$13 billion listing in the city last year, won’t be able to join the trading link between Hong Kong and the mainland also highlighted the difficulties the bourse faces in forging closer connections with investors in the world’s second-largest economy. That strategy is now seen as key to its future growth.

The exchange is rated buy by 13 analysts, six have a hold and one recommends to sell, according to data compiled by Bloomberg.