US crusade against Huawei will not succeed

Editor's note: The United States is putting more pressure on its allies not to use Huawei equipment, by threatening to stop sharing intelligence with them if they use the Chinese company's products and technologies. Will the US' European allies buckle under the pressure? Two experts share their views on the issue with China Daily's Liu Jianna. Excerpts follow: 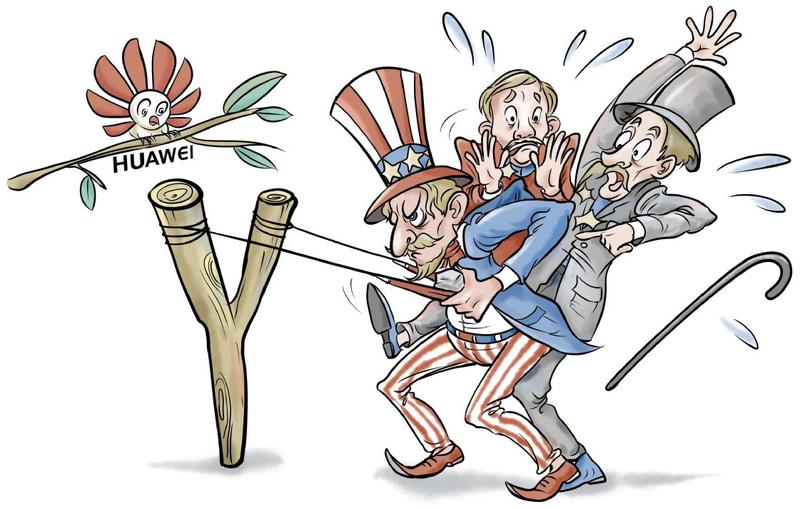 Hard to build an alliance against Chinese company

The US, it seems, cannot accept the development of Huawei, because it embodies China's high-tech-led growth. Also, the US insists that Huawei's telecommunications equipment and technologies would weaken its domination of the global intelligence sharing system. And with the economic complementarity between the US and China being rapidly replaced by fierce competition, thanks to the upgrading of industrial and supply chains, Washington has labeled the Chinese company a "security threat".

Assuming the Chinese government uses Huawei as a tool to promote its economic expansion and political influence across the world, the US fears it could be pushed into a disadvantageous position in the competition with China if it loses the battle against the Chinese company. Which explains the many cheap tricks the US has employed to discredit Huawei.

Yet, despite its desperate attempts to give Huawei a bad name, the US faces difficulties in making its allies toe its line ...

Yet, despite its desperate attempts to give Huawei a bad name, the US faces difficulties in making its allies toe its line, especially given the United Kingdom's decision not to ban Huawei from its 5G networks. After all, in terms of foreign policy, especially trade policy, no country can afford to follow another country's diktats at the expense of its national interests.

But in spite of all this, Washington will not stop playing its dirty games to gain victory in the war it has declared against the Chinese company.

Moreover, the US' policy of competing strategically with China, marginalizing China's global influence and weakening its unifying power at home has not changed. China and the US are members of the wider international community, and whereas China hopes to maintain the status quo, the US has been trying to decouple its economy from that of China. The dispute over Huawei will influence bilateral relations to a large extent. As such, a grim future lies ahead for bilateral relations if the two sides don't meet each other halfway.

Li Haidong, a professor of US studies at China Foreign Affairs University

European nations' priority are their own national interests

Caught in between the world's sole superpower's fallacy of carrots and sticks, some of the US' European allies have stuck to the principle of business being business. They have adopted a pragmatic approach toward Huawei despite Washington's desperate moves not only because the US' philosophy of disrupting free trade and creating disorder runs against their own philosophy, but also because by banning Huawei from taking part in their 5G networks they stand to lose much of their advantages. Especially, if they turn to other suppliers, they would have to bear higher costs and lose many of the development opportunities. Not to mention that the US hasn't provided a competitive alternative to Huawei.

That the UK is opposed to the US' stance on Huawei, as it was when it joined the Asian Infrastructure Investment Bank a few years ago, is certainly significant and could prompt other European countries to follow in its footsteps. Yet it should be noted that the UK has only agreed to use Huawei equipment in non-core telecom networks with a cap on Huawei's market share, which means that other European countries could bargain fiercely with the Chinese company to get more benefits.

In some ways, the US and its European allies share the goal of competing with China's development and reducing its technological advantages. Therefore, although some European countries' decision to defy the US is welcome news, we should be aware of the fact that for countries, what matters is really their own national interests.

Ding Chun, director of the Center for European Studies and Jean Monnet chair at Fudan University