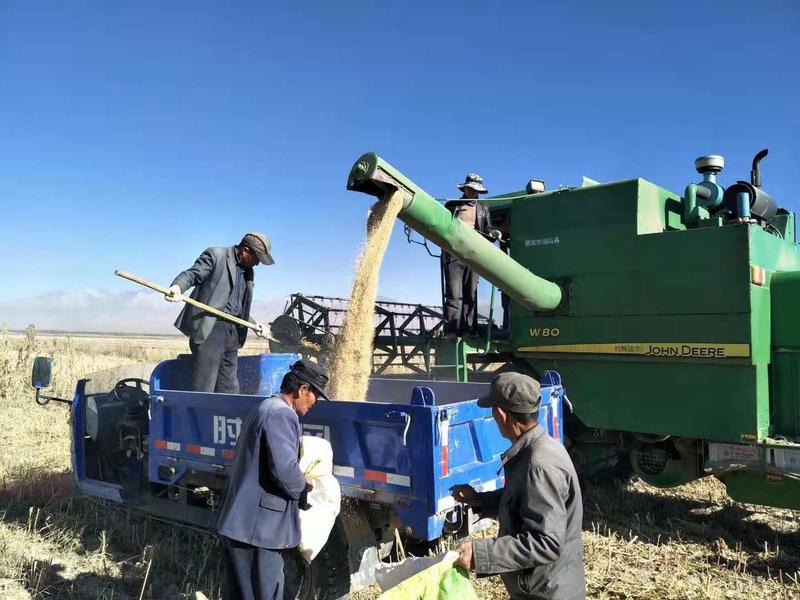 In winter, Delingha, a city of 100,000 residents on the edge of the Qaidam Basin in Qinghai province, is eerily quiet.

In summer, the banks of the Bayin River brim with backpackers seeking brisk, cool breezes. At this time of year, though, it is rare to see a living soul walking against the gusts of wind, and only a few vehicles swoosh by every once in a while.

As a young city, founded in 1988, Delingha, or "Golden Sun" in the Mongolian language, is home to a large number of people from ethnic groups－mainly Mongolian, Tibetan and Hui－who have moved from other parts of the province to pursue new lives.

Delingha's youth has allowed the local government to refurbish the 42 villages under its jurisdiction, providing moderate infrastructure and offering sufficient subsidies.

However, they are mostly "empty villages"－settlements where the young and those able to work have moved, leaving only elderly residents. These places have no collective economy and meager collective income, according to Wang Rui, an official with the city's agriculture, animal husbandry and poverty relief bureau.

Among the most vulnerable people are impoverished villagers who have been hit by illness or mishaps and are sometimes crushed mentally. Their lives can be overturned overnight.

The city government has introduced strong measures to lift their spirits, as well as providing assistance beyond financial support, with the aim of helping them regain a foothold. 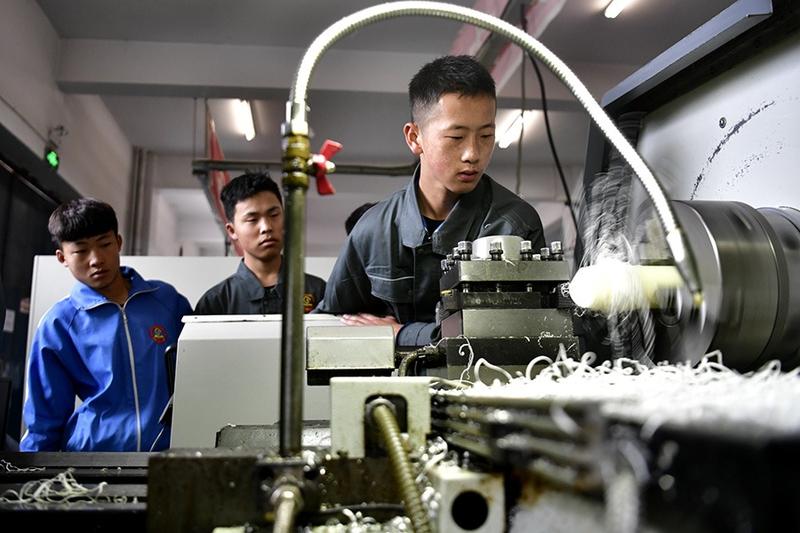 Students receive training at a vocational school in Delingha, Qinghai province, last year. A number of education and training programs are being used to alleviate poverty nationwide. (PHOTO / XINHUA)

According to the local government, in 2015－the year China initiated "precision" poverty relief missions that catalog every poor person in the country－989 people were living in abject poverty in Delingha and the city was home to 20 national-level impoverished villages.

One basic safety-net project employs poor villagers as sanitation workers or forest rangers, with average pay of about 2,400 to 2,800 yuan (US$340 to US$400) per month.

"It gives me a stable job and keeps me busy," said Mao Fayun, who had risen at dawn to sweep the pristine, snow-covered streets of Lianhu, a village in Delingha.

The 43-year-old used to rely on odd jobs in nearby areas that barely provided subsistence wages. When his father was diagnosed with cataracts and severe heart disease several years ago, the debts from medical fees quickly piled up, leaving Mao at a loss.

He said his other income comes from the sale of goji berries－or Chinese wolfberries－he grows in small fields he owns near his house.

In addition to the harvest, subsidies provided by the government have helped him to get through some of the most difficult times.

His father died in 2018, but Mao has stuck with the job that he regards as central to his life.

"Despite all the hardships, I feel blessed to be able to continue with the sanitation job, because it is close to my home and stable, and it makes me feel fulfilled," he said. 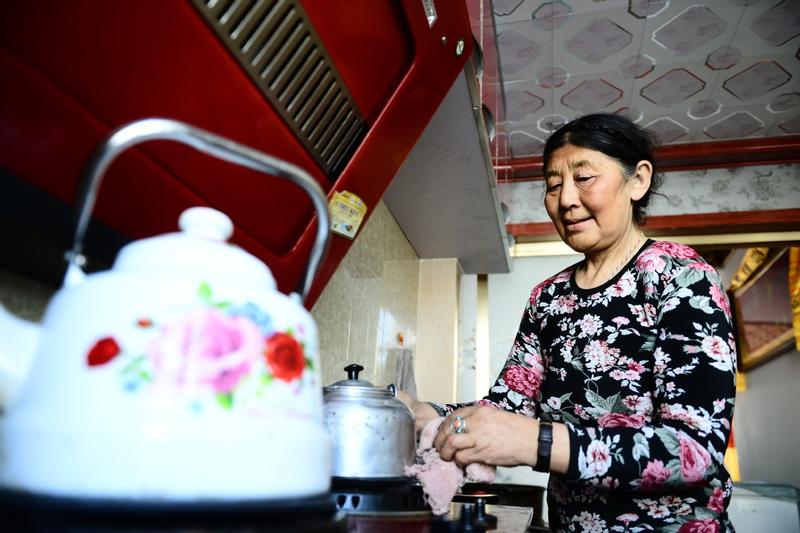 A woman cleans a kettle in her kitchen at an affordable community in the city in 2014. (PHOTO / XINHUA)

While Mao quickly landed a satisfying job that provided a means of support both financially and mentally, it took far longer to heal the wounds Su Qingchun received in a car accident in 2015.

"Su was actually one of the betteroff residents until the accident happened," said Cao Jinxiu, an official in Fukang village, Delingha.

Su's 2-year-old son was killed in the crash, while his wife and daughter were both injured. Medical expenses quickly ate up the family's savings.

After temporarily sending his wife and daughter to their home village in Qinghai to receive treatment and recover, the then-35-year-old Su, devastated by the loss and the mounting debt, locked himself in his home and severed all communication with the outside world.

Toward the end of 2015, his family was added to the profiling system that registers poor people individually, which allowed him to access a series of government-funded insurance programs.

"It was distressing to see a person who was once energetic and skillful plunge into desperation and impoverishment," said Cao, as she recalled the times she banged on the door of Su's house but received no reply.

Su, 40, is a skilled welder, a trade he learned while working for a local alkali manufacturer.

"I incessantly texted and messaged him, encouraging him to collect himself and use his skill to sort of reboot his life," Cao said.

"Very slowly but firmly, he stepped out and began taking odd jobs to make a living."

With the help of village officials, Su applied for an interest-free loan program designated for poverty relief purposes. The 50,000 yuan he received helped Su to jump-start his own welding business.

"The money was like a wave of timely rain falling on cracked, dry land," Su said. "I was able to set up a mobile welding stall and took on more projects to raise my income."

Since then, Su has recruited 15 residents in Fukang and other nearby villages to handle the rise in orders at his micro business.

At the end of 2018, he moved into a new apartment in the city center.

The pain caused by the accident remains, though, and he could not help tearing up when he recounted his experiences.

"I have learned to appreciate what I have now," he said. "I can't imagine where I would be now without the encouragement and assistance I got from the village." 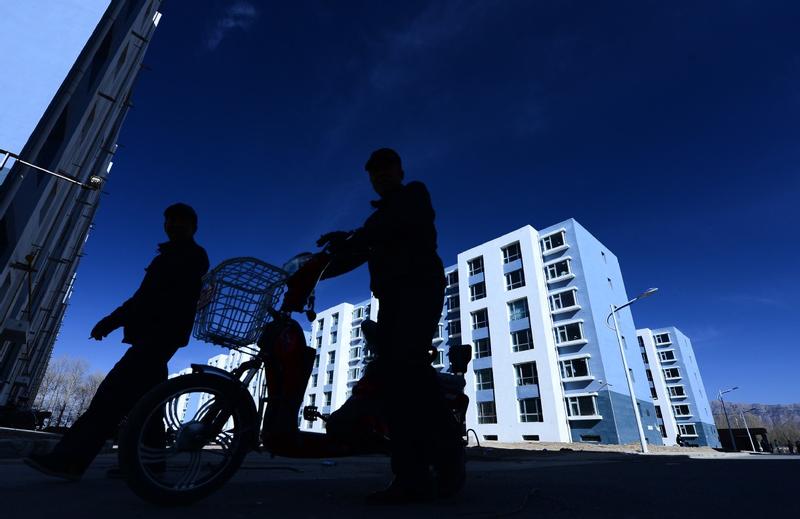 A view of an affordable housing complex in Delingha. (PHOTO / XINHUA)

The interest-free loan program that assisted Su has also benefited dozens of impoverished villagers, who used the money as motivation to start small businesses.

According to the city government, the Qaidam Rural Commercial Bank had distributed 19 such loans, totaling 825,000 yuan, by the end of last year.

Dai Cunzhong in Delingha's Ankang village has also benefited. In 2004, he traveled from a mountainous region of Haidong, a city in Qinghai about 550 kilometers away, to visit relatives and ultimately settled down in Fukang.

"I was a farmer in my hometown, but I had no land in Fukang," he said.

"So, I started working at a nearby brick factory. My dearest wish at the time was to have enough food and not starve."

The final straw that tipped Dai into poverty came in 2015, when his wife had to have an operation to remove several cysts.

Speaking about the seven impoverished households in the area, Yong Zhong, a poverty alleviation official in Ankang, said three had slipped into poverty because family members fell ill.

"There is not much cultivable land in Delingha, which means there's no sustainable income for people. So the villagers' precarious living conditions can easily be disrupted by a single incident."

In 2017, Dai obtained a loan of 50,000 yuan and rented 0.67 hectares of deserted fields to plant quinoa－a high-value crop he had some experience of growing.

The village committee offered free technical guidance and tutorials on using various types of equipment, and within a year, Dai had earned 20,000 yuan from his quinoa harvests.

In April 2018, he rented a further 6.67 hectares in Dulan, a neighboring county, which he also dedicated to growing quinoa.

His daughter, who has recently graduated from college, said it was reassuring to see that her father no longer sighs or frowns all the time.

"He is now busy managing his quinoa business," she said. "He has often told me that a person should work hard, be open and be brave enough to venture into new areas."

In Delingha, those who aspire to start their own businesses are given grants and guidance by the local government, while other types of safety net have proliferated in the city to cushion the impact of illness and accidents that may hit the most vulnerable residents.

According to Wang, from the agriculture, animal husbandry and poverty relief bureau, one hallmark policy is the purchase of additional medical insurance programs for the impoverished.

The program, which began in 2017, is funded by provincial-level poverty alleviation funds, and it helped Delingha to lift all of its impoverished residents out of poverty by the end of the same year.

"With the new medical insurance, only 10 percent of medical expenses burdening poor villagers are paid out-of-pocket on average, greatly reducing the possibility of them slipping back into poverty," Wang said.