Risks of wildlife trade under spotlight

Links with diseases show that tougher action is needed in Asia, experts say 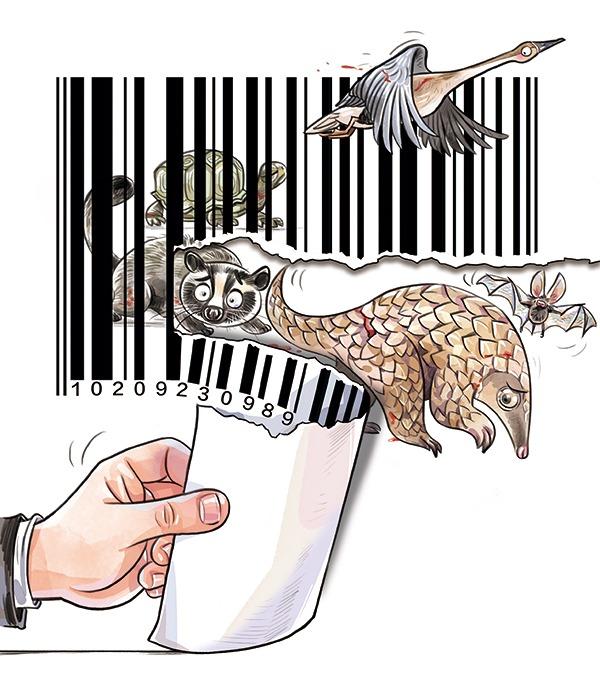 Malaysian businessman Alexander Yee decided to set up a sanctuary for marine turtles after he realized the extent of illegal wildlife trade in his hometown in Sabah.

The state is home to Southeast Asia’s highest peak and pristine tropical rainforest. But such abundant resources attract both nature lovers and poachers.

The poaching of sea turtles and their eggs is prevalent in the eastern Malaysian state. But Yee’s turtle sanctuary, established together with the Sabah Wildlife Department in 2013 on Libaran island in the state’s east, has harvested more than 33,000 eggs and released over 30,000 hatchlings in the Sulu Sea.

Yee said the illegal trade in wildlife is rampant throughout Southeast Asia.

The United Nations Office on Drugs and Crime estimates the global illegal wildlife trade is worth more than $23 billion a year. Southeast Asia occupies a key place in this lucrative trade.

The region’s abundant flora and fauna, combined with its porous national borders and rising demand for exotic meat and traditional medicine, have made Southeast Asia a key source, transport point and consumer of trafficked animals.

Experts said the trend is also alarming given the link between the wildlife trade and the rise of zoonotic diseases — infectious diseases that spread between animals and humans — as highlighted by a number of studies.

Wild fowls are a natural host of the avian flu virus that can kill both humans and poultry. And wild birds, as well as civet cats, are trafficked worldwide.

“The rise of new and emerging diseases should be a wake-up call for us to recognize that health and biodiversity are inextricably linked,” said Theresa Mundita Lim, executive director of the Association of Southeast Asian Nations Center for Biodiversity.

Richard Thomas, global communications coordinator for TRAFFIC, a nongovernmental organization monitoring the illicit trade in wild animals, said the novel coronavirus outbreak is the latest reminder of the dangers.

Thomas said animals are the “natural reservoir for a whole range of different viruses”, and the illegal wildlife markets are the main sources of virulent viruses.

But authorities are finding the wildlife trade, despite the huge risk it poses to human health, hard to stamp out.

“Why is it difficult to stop the illegal wildlife trade? Because there is a demand, a taste for what is rare and exotic, and the belief that the disease cannot happen to them,” Lim said.

She said the demand is sustained by the massive poverty in communities in and around the natural habitats of wild animals. Also, some residents resort to poaching to earn cash and can become easily exploited by the wildlife traders.

Lim said there can be a drop in demand as soon as the link between emerging diseases and the wildlife source is made more well known.

“But the market is still there and the demand may rise again once the epidemic is addressed,” Lim said.

Experts said Southeast Asian countries are doing their part by imposing trade bans and strict monitoring within their borders.

And Lim cited the Chiang Mai Statement of Association of Southeast Asian Nations (ASEAN) Ministers Responsible for the Convention on International Trade in Endangered Species of Wild Fauna and Flora and Wildlife Enforcement on Illegal Wildlife Trade, which was adopted in 2019.

Lim said that regional cooperation is helping to reduce the illegal trade in elephant tusks in Southeast Asia.

Separately, Thomas pointed to the ASEAN Wildlife Enforcement Network, which led to the seizures of wild birds in Indonesia, pangolins and ivory in Malaysia and Singapore and tortoises in Thailand.

And he said that there are campaigns to discourage people from consuming wildlife. He cited TRAFFIC’s Chi Initiative in Vietnam, which aims to reduce the consumption of rhino horn.

For OzgunEmre Can, a conservation biologist at the Wildlife Conservation Research Unit at the University of Oxford, in the United Kingdom, even the legal trade in live animals poses risks to global human health.

“Pathogens, which are present in their host organisms, do not care whether they are traded legally or illegally,” he said.