By He Wei and Wang Zhuoqiong 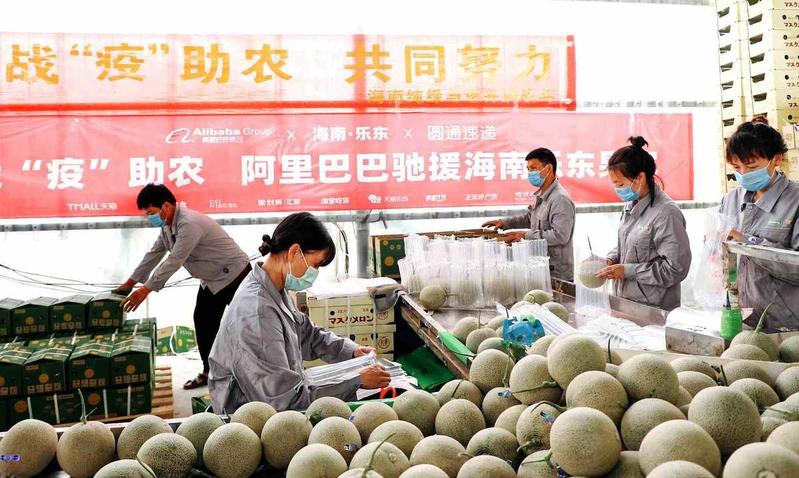 Fruit growers in Haikou, Hainan province, package cantaloupes, which will be sold on Alibaba's online platform and delivered across the country. (NIU JING / FOR CHINA DAILY)

Business operations are fast returning to normalcy in China, with most of the companies having resumed normal production, e-commerce giant Alibaba Group Holding Ltd said in a new report released on Monday.

Since February, over 30,000 people have set up virtual stores every day on Taobao, the country's largest e-commerce site allowing individuals to sell goods to customers directly, according to the report.

The number of newly-opened online shops rose by 22 percent on a weekly basis, the company said. Guangdong, Zhejiang and Jiangsu provinces, where business activity is traditionally robust, are home to the highest numbers of newly-registered shop owners.

The all-in retail strategy is to push our team to take the initiative to engage with consumers, so as to enhance the consumer loyalty for our brands

Brian Yiu, CEO of FILA China and vice-president of Anta

Nearly 50 percent of the delivery staff have returned to work, the report said, with Guangdong boasting the highest rate for both parcel pickups and dispatches.

Owing to novel coronavirus outbreak, people have been largely confined indoors with outdoor shopping largely reduced. On the other hand, online marketing and product displays have blossomed with livestreaming being adopted by catering companies, car dealerships and property consultancies.

Volvo Cars rolled out a livestreaming show featuring its XC 40 car model on Feb 14, targeting young people who pursue fashion and safety in vehicles but are unable to have a touch-and-feel experience of the model via physical stores.

The online broadcast via its Tmall official store has greatly boosted online orders for all Volvo Cars models, with the XC40 accounting for half of all the sales, the company said, without disclosing any figures.

To offset the impact on brick-and-mortar stores and boost online sales, sportswear company Anta Group has mobilized its more than 30,000 employees－including management and distributors－to sell sports products through WeChat stores. Anta said it has exceeded the monthly e-commerce sales target for January and expects to do the same this month as well.

"The all-in retail strategy is to push our team to take the initiative to engage with consumers, so as to enhance the consumer loyalty for our brands," said Brian Yiu, CEO of FILA China and vice-president of Anta.

Data from Alibaba's payment unit Alipay showed that the number of small-scale shops resuming operations rose by 25 percent after the Spring Festival.

Around 88 percent of the shop owners said they won't reduce staff this year, with more than half being confident that revenue this year would surpass that of last year.

Shanghai-based East Hope, a privately-run conglomerate encompassing agriculture and heavy chemical industries, relied on DingTalk to manage its 20,000 staff who are scattered across 30 provinces and cities.

"Using the 54 functionalities embedded in the app, we are able to keep a close watch on our employees during the special period, which greatly enhances organizational efficiency," said Huang Xingsheng, general manager of the company's digitalization unit.