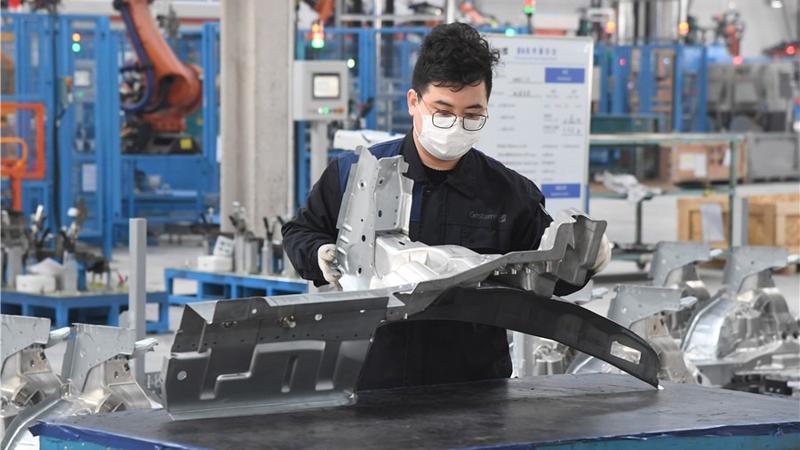 A staff member carries out product quality inspection at an auto parts manufacturing company in Beijing on Feb 10, 2020. (PHOTO / XINHUA)

BEIJING - The ongoing novel coronavirus outbreak is likely to strain China's trade growth in the first quarter of this year, but its impact is manageable, a commerce official said Friday.

Trade growth in the first two months of 2020 might slide due to disrupted logistics and delay of business activities, Li Xingqian, director of the Ministry of Commerce (MOC)'s foreign trade department, told an online press conference.

We have the confidence to stay moderately upbeat on the whole year's trade growth, which is expected to be within a reasonable range

The MOC has rolled out an array of policies to help trade enterprises resume business and deliver orders, with more targeted aid expected to follow.

Li said the trade sector is picking up pace in recovery. Trade firms across the country are in steady operation resumption, with those in the eastern coastal areas reporting faster progress than their central and western counterparts.

"Based on our monitoring, there won't be massive lay-offs in the trade sector," Li added.

Li said preparation for the 127th China Import and Export Fair, slated to open in April, is in the pipeline.

"We have the confidence to stay moderately upbeat on the whole year's trade growth, which is expected to be within a reasonable range," Li said, citing generally stable global demand and solid domestic trade industry fundamentals.

China still has advantages in attracting overseas investment and the outbreak has not undermined the confidence of most multinationals in investing in China, nor has altered their investment strategy, Zong Changqing, director of the Department of Foreign Investment Administration of MOC, said in the onine briefing.

The government is "confident and determined" to stabilize foreign investment this year, Zong said.

Foreign direct investment into the Chinese mainland saw a steady year-on-year increase of 4 percent last month, compared with a growth of 4.8 percent registered in January 2019.

"The impacts of the outbreak on foreign investment have begun to show, and are expected to become greater in February and March," he said.

A MOC circular last week stressed support for large foreign investment projects, calling for coordinated efforts to solve their difficulties and minimize the impacts of the epidemic.

The ministry will guide local governments to help foreign-invested companies make full use of support policies, strengthen the protection of their legitimate rights and interests, widen market access for foreign capital and further improve the business environment, Zong said.

Cooperation projects on the Belt and Road Initiative (BRI) are running generally smoothly with no massive delays amid the novel coronavirus outbreak, Chu Shijia, an official with the Ministry of Commerce, said Friday on the brieing.

Projects are closely followed, and a string of measures have been taken to mitigate the epidemic's impact, Chu said.

Meanwhile, emergency response mechanisms are set up in Chinese business councils in overseas markets to track and solve related problems, according to him.

In a circular issued earlier this week, the ministry urged firms to promote major BRI projects in a steady and orderly fashion and promised enhanced capital support.