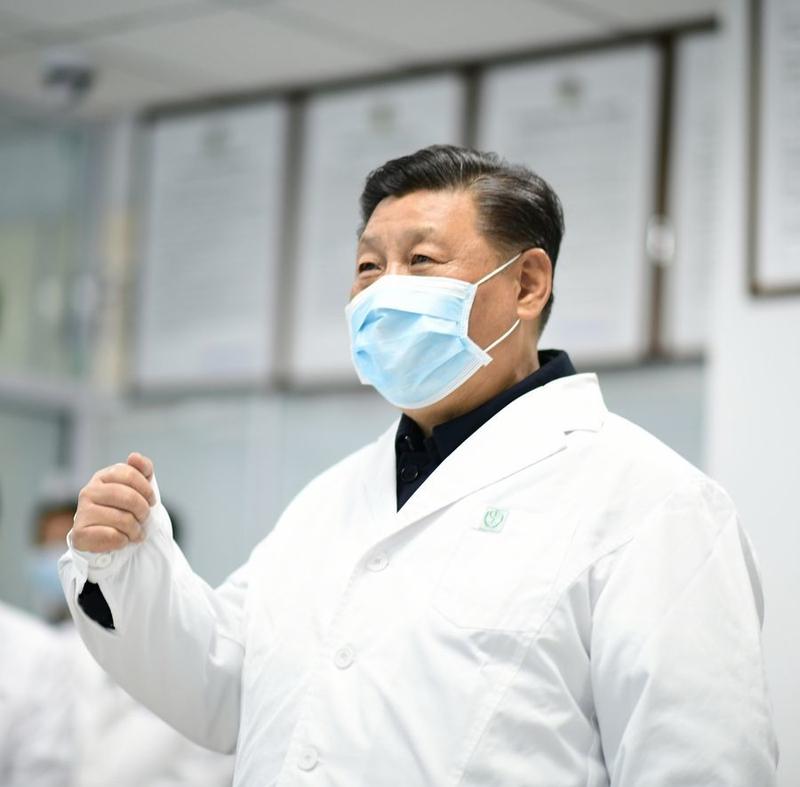 President Xi Jinping checks the treatment of hospitalized patients at the monitoring center and talks to medical staff on duty via a video link at Beijing Ditan Hospital in Beijing, capital of China, on Feb 10, 2020. (XIE HUANCHI / XINHUA)

A key meeting presided over by Xi Jinping, general secretary of the Communist Party of China Central Committee, on Wednesday underlined the need to coordinate epidemic control and socio-economic development to meet targets set for this year.

The meeting of the Standing Committee of the Political Bureau of the CPC Central Committee also stressed the importance of rolling out more targeted tax cuts and fee reductions to alleviate difficulties faced by businesses, and of making prudent monetary policy more flexible and better tailored to boost financial services to enterprises.

Xi said at the meeting that there have been some positive developments in the contagion situation, and the epidemic control efforts have seen some positive, hard-won results.

He stressed that epidemic control and prevention are now at their toughest and most critical period, and the country must spare no effort to continue with key tasks against the contagion.

ALSO READ: Results from Chinese drug trials for coronavirus 'due in weeks'

Epidemic control efforts in hard-hit and high-risk areas must be further stepped up, and local authorities must ensure their work is more concrete, more meticulous and better implemented, he said.

He urged resolute measures to win the battle against the contagion and endeavor to meet the year's targets for social and economic development.

This year marks the conclusion of China's efforts to build a moderately prosperous society in all respects and the 13th Five-Year Plan (2016-20), and local authorities must work to minimize the impact of the outbreak and maintain stable economic performance, social harmony and stability, according to a statement released after the meeting.

The meeting highlighted the importance of intensifying macro policy regulation and coming up with policy measures to cope with the outbreak's impacts.

Producers of materials used in the epidemic control and prevention will be offered more favorable interest rates with credit. The government will refine differentiated financial services to be offered to regions, sectors and businesses hit hard by the outbreak.

The employment-first policy will be carried out with greater intensity, and fiscal, tax, financial and social security policies for small and medium-sized enterprises will be further optimized.

Investment of special bonds issued by local authorities will be further optimized, and the central government budget will be put to better use, according to the statement, adding that more will be done to spur private investment.

The government will promote the high-quality development and expansion of consumption services, boost consumption of commodities and unleash the potential of emerging consumption sectors, according to the statement.

Foreign trade businesses will receive support to speed up the resumption of production, and authorities will offer more aid in trade financing and export credit insurance.

Hubei province and Wuhan, the provincial capital and epicenter of the outbreak, remained the top priority in the epidemic control and prevention, according to the statement.

To address medical resources shortages, the government will enable more businesses to resume production, encourage eligible businesses to expand production and help businesses solve shortages in workers, equipment, raw materials and funds, according to the statement.