Virus could peak in April but may return 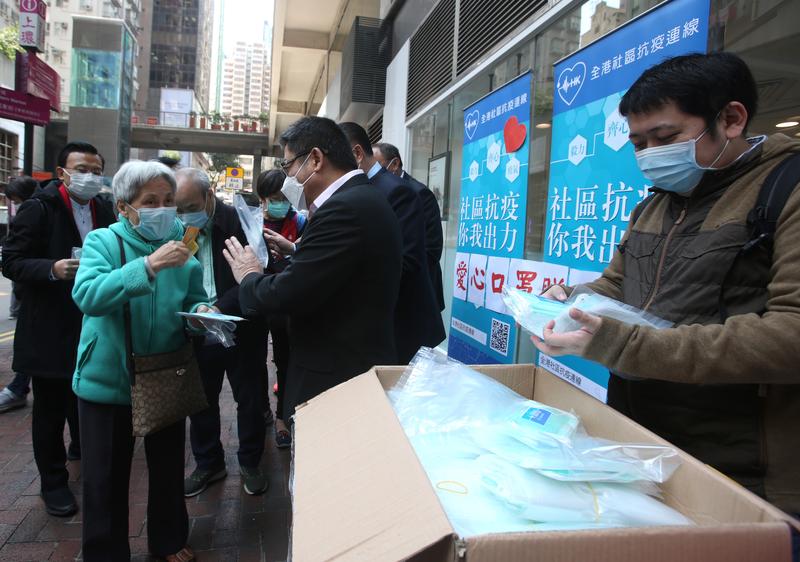 Elderly residents of Sheung Wan are delighted to get face masks free of charge on Tuesday from members of a community alliance formed to fight the novel coronavirus. (PARKER ZHENG / CHINA DAILY)

Executive Councilor Arthur Li Kwok-cheung said the novel coronavirus pneumonia is a highly contagious disease, and that’s why it has infected so many people in such a short time — but it is not too deadly.

In his opinion, Hong Kong is doing quite well containing the virus as there have not been many new confirmed cases in recent days. He guessed the virus situation will reach a peak in April and subside in May or June with the arrival of summer. However, the virus will return because it is so infectious, he said.

It is rather terrible because it is very contagious and people get infected fairly quickly without apparent symptoms. Fortunately, it is not so deadly, as so far, the global mortality rate is about 2 percent, as opposed to around 12 percent from the SARS epidemic in 2003

Li, a surgeon by training, was the Chinese University of Hong Kong’s dean of the Faculty of Medicine from 1992 and then became the school’s vice-chancellor in 1996 before he joined the Hong Kong SAR government as the education secretary six years later.

COVID-19 is a new disease that emerged only about two months ago, he said in an exclusive interview with China Daily over the telephone, using the World Health Organization’s official name of the disease.

“It is rather terrible because it is very contagious and people get infected fairly quickly without apparent symptoms. Fortunately, it is not so deadly, as so far, the global mortality rate is about 2 percent, as opposed to around 12 percent from the SARS epidemic in 2003.”

Li also said the virus situation is not too worrying. Citing statistics on the Chinese mainland, he said that only a small percentage of the cases are serious. Most people under 40 can recover, while elderly patients with chronic diseases such as diabetes and heart disease are more vulnerable, he said.

It is not an incurable disease as the serum of recovered patients has been used to treat the COVID-19 patients and it has proved effective, he said.

Li said the drastic decrease of passengers between Hong Kong and the mainland after the closure of all but three cross-boundary control points has proved effective in controlling the virus, calling the demand to shut all checkpoints too extreme and less than scientific.

“Hong Kong, which has a 7 million-plus population, is doing quite well in the prevention of the virus although many people criticize the government. We have only 60 confirmed cases, while Singapore, which does not border the mainland and has a smaller population of about 5 million, has 77 confirmed cases.

“In Hong Kong, there are not many confirmed cases and we do not have confirmed cases every day, with the exception of 11 people who were infected at a hotpot meal among 19 family members on the second day of the Lunar New Year holiday.

“I hope the virus situation will become slower in two or three months’ time when the weather becomes hotter. It is because COVID-19 is a new disease, but it is like influenza, which is very active in winter,” he said.