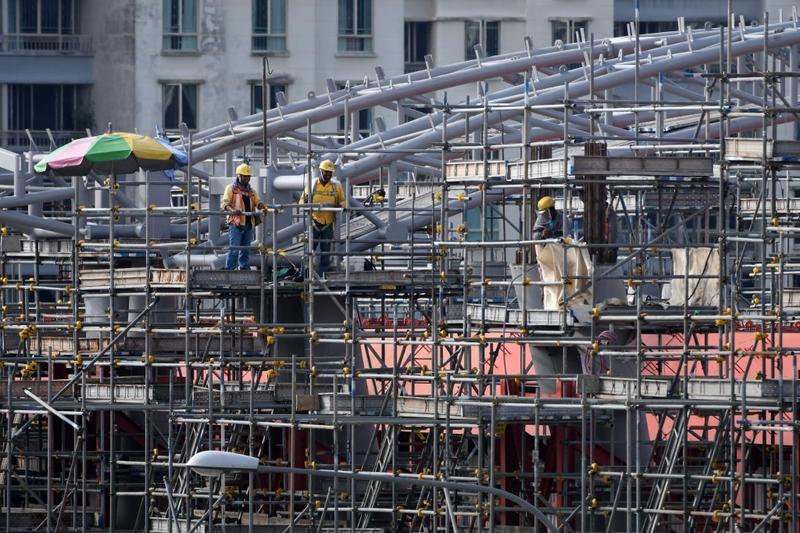 Labourers stand on scaffolding at a construction site in Singapore on March 5, 2018. (ROSLAN RAHMAN / AFP)

SINGAPORE - Singapore construction firms are asking for advice about whether they have the option of invoking force majeure clauses in building contracts as the government turns away or quarantines Chinese labor to stop the spread of the coronavirus, lawyers told Reuters.

Singapore has an estimated US$20- US$24 billion of public and private sector building projects in the works this year - and any large impact on the sector, which is highly dependent on foreign labor, could help push the economy into recession.

Singapore has an estimated US$20- US$24 billion of public and private sector building projects in the works this year - and any large impact on the sector, which is highly dependent on foreign labor, could help push the economy into recession

Derek Loh, a partner at Singapore-based TSMP Law Corporation, said five clients involved in public sector construction projects have approached him in recent weeks for advice on force majeure - which refers to unexpected external circumstances that prevent a party to a contract from meeting their obligations.

“These clients that have sought advice are largely those that employ Chinese labor,” said Loh.

Two other senior lawyers, who declined to be named, said they had also received queries related to force majeure.

The Building and Construction Authority, a government agency, has said, however that contractors involved in public sector projects can seek extensions. It has also urged private sector developers to give extensions to contractors that work for them.

Singapore, which has one of the highest numbers of virus infections outside China at 77, has halted the issuance of new visas to Chinese nationals since Jan. 31. Workers from China with existing work visas must seek approval before re-entry, and if approved, must spend 14 days in quarantine.

Singapore’s labor ministry said last week it was rejecting 400 applications daily from returning workers with recent travel history to China and had also canceled some work passes. It has also prevented employers from hiring foreign staff if rules are breached.

The Singapore Contractors Association did not respond to a request for comment.

Construction laborers without any travel history to China have also been infected, with five Bangladeshi workers among confirmed cases. The firm involved, Boustead Projects Ltd, said it halted construction activities to disinfect areas and is continuing to assess the impact on the project concerned.

The construction sector, which is allowed to hire workers from only a handful of countries including China, India and Bangladesh, expanded 2.8% in 2019, one of the strongest performers in an economy that recorded a growth rate of 0.7%, its slowest in a decade.

The last time several construction firms sought to invoke force majeure in Singapore was in 2007 when Indonesia banned sand exports to the city-state bringing building activity almost to a halt.