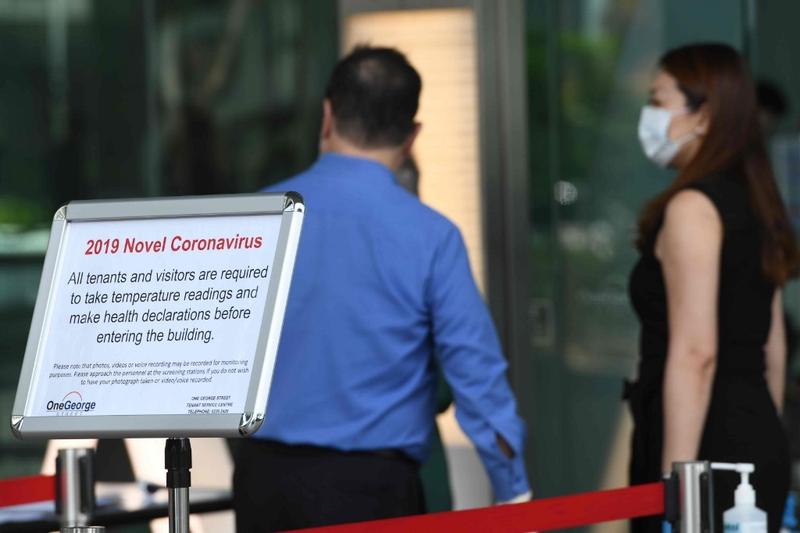 A sign relating to novel coronavirus is seen outside a building in the financial district of Singapore on Feb 10, 2020, in the wake of the spread of the virus. Singapore, which has reported 33 cases of people infected with novel coronavirus, raised its alert level on February 7 to "orange" -- the same as during the deadly 2003 SARS outbreak, indicating the virus is severe and passes easily between people. (ROSLAN RAHMAN / AFP)

SINGAPORE — Singapore is set to roll out a hefty package of measures to cushion the blow from the coronavirus epidemic on its economy next week, with some analysts expecting it to budget for its biggest deficit in over a decade.

The Southeast Asian business and travel hub, expected to see its economy contract this quarter after a paltry 0.7 growth last year, could also unveil schemes to tackle cost of living issues ahead of an election expected this year.

Economists at Citi and Maybank expect a virus relief package of at least S$700 million (US$505 million) at the Feb 18 budget, while Singapore’s biggest bank DBS predicts a deficit of S$7.9 billion, the highest since at least 2005.

“The latest coronavirus outbreak has thrown a spanner in the works,” said Irvin Seah, senior economist at DBS. “Couple that with an impending general election and the massive accrued surpluses, expectation for the budget is naturally high.”

Singapore tends to be conservative in its fiscal forecasts. During the 2009 financial crisis, it forecast a S$8.7 billion deficit, only to land a S$819 million shortfall, government data shows.

As a percentage of GDP, the virus spending economists are predicting is comparable with the S$230 million (US$166 million) package issued during the 2003 outbreak of Severe Acute Respiratory Syndrome, which killed over 30 people in Singapore and nearly 800 worldwide.

Measures could include property tax rebates for retailers and hotels, lower foreign worker levies for tourism-related sectors and bridging loans for smaller firms.

Economists forecast a fiscal deficit of 1.4-2 percent of GDP - in the range of the 1.7 percent reached during the 2001 dotcom bubble collapse.

The economic impact from the outbreak could potentially be deeper than the SARS episode given stronger economic links with China.

Visitor arrivals are expected to drop by nearly a third this year and Singapore has so far reported 47 cases of coronavirus, which has already claimed over 1,000 lives in China.

Economists also expect spending on schemes to retrain workers and help offset an impending hike in the goods and services tax. Measures to tackle costs of living - a hot election issue - such as tax rebates and cash transfers are also possible.

Singapore’s elections must be held by early 2021, and the government was expected to call for one within a few months before the coronavirus outbreak hit Singapore in late January.