WHO voices concern over stigma, urges all to show solidarity 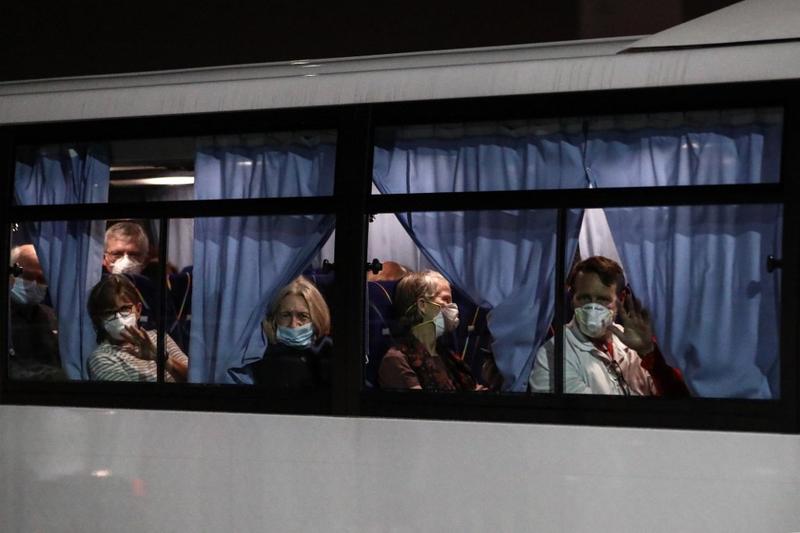 US passengers from the Diamond Princess cruise ship wave to reporters as they leave the Daikaku Pier Cruise Terminal in a bus, at Yokohama port, Feb 17, 2020. (BEHROUZ MEHRI / AFP)

GENEVA - The World Health Organization (WHO) on Monday urged all to show solidarity in the face of the novel coronavirus outbreak, and avoid any stigma or profiling against those affected by the disease.

Answering questions at a daily briefing on whether cruise ships should be "steered clear of" following the case of the Diamond Princess ship, Michael Ryan, executive director of WHO Health Emergencies Program, said that "it's impossible to reduce the risk of anything to zero."

He said that outside China's Hubei province, the epicenter of the outbreak, "this epidemic is affecting a very tiny, tiny, tiny proportion of people."

Ryan urged the public to be "extremely measured" at WHO's actions, saying that "everything we do needs to be based on public health and evidence."

The Diamond Princess cruise ship, which was carrying more than 3,700 passengers and crew, has been kept in a two-week quarantine period off the Yokohama port near Tokyo, after an 80-year-old passenger on board from Hong Kong was found infected with the virus.

So far, the total number of confirmed infections on the cruise ship has risen to 454.

"We need an approach to manage risk, which allows us to continue to operate as a society while minimizing the risk we know about," he added.

The WHO expert believed that though some specific risks were associated with a small number of cruise ships, the risk has since waned.

"We need to be realistic about what has happened ... separate the past from where we are now, what's the evidence now and where do we go from here," he said.

The WHO chief stressed that measures taken against the coronavirus should be proportional to the situation based on public health, science and evidence

READ MORE: United as one and triumphant we will stand

Also at the briefing, WHO Director-General Tedros Adhanom Ghebreyesus stressed that measures taken against the coronavirus should be proportional to the situation based on public health, science and evidence. "Blanket measures may not help," he said.

Separately, the WHO chief paid tribute to nurses working on the front line to stop the  outbreak, saying that this year more than ever the world must show solidarity with them.

Retweeting a Xinhua video posted earlier on Monday, the WHO chief said that health workers, including nurses, are bearing the biggest burden in the outbreak.

The video, produced and posted by Xinhua on twitter, told a story of how six nurses at an isolation points in China's Anhui province care for two children whose parents were infected with novel coronavirus.

"This touching video shows the efforts and love nurses are investing in their jobs and patients to save lives. This year more than ever we must show our solidarity and support nurses and midwives," Tedros said.

The World Health Assembly has designated the year 2020 as the International Year of the Nurse and the Midwife.