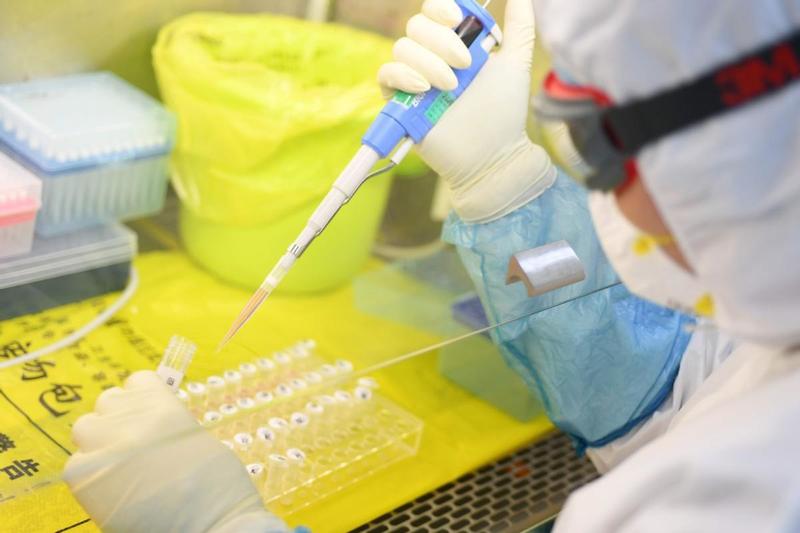 Chinese scientists are divided on the official scientific name of the novel coronavirus, with supporters saying the name is descriptive and follows typical classification practices and others claiming it could easily be misunderstood and abused to cause unnecessary fears.

The name for the virus is called Severe Acute Respiratory Syndrome Coronavirus 2, or SARS-CoV-2. It was released on Tuesday in the nonpeer reviewed journal database BioRxiv by the Coronavirus Study Group of the International Committee on Taxonomy of Virus.

The ICTV group said the new pathogen is a sister strain parallel to the SARS virus from 2003, and both viruses fall under the species of SARS-related coronavirus

The ICTV group said the new pathogen is a sister strain parallel to the SARS virus from 2003, and both viruses fall under the species of SARS-related coronavirus.

The rationale behind the classification is to "highlight the need to study the entire virus species to complement research focused on individual pathogenic viruses of immediate significance".

The present outbreak is the third spillover in two decades of an animal coronavirus to humans resulting in a major epidemic. Therefore, "the research will improve our understanding of virus-host interactions in an ever-changing environment and enhance our preparedness for future outbreaks," it said.

READ MORE: Spare a thought for health of the Hong Kong economy

The new name has received mix reception since it was published. Mebratu A. Bitew, a biology PhD candidate at the University of Melbourne, said on his Twitter account that he favored the new name over the previous 2019-nCoV title, which implies a novel coronavirus discovered in 2019.

He said the word "novel" was a "confusing jargon" because neither the disease nor the host range can be used to reliably determine a virus's novelty, since a few mutations can turn a virus deadly or switch to another host.

The new title has also followed traditional naming conventions, such as those used in naming Dengue fever. According to the ICTV, the mosquito-borne tropical virus has four serotypes with similar hosts, symptoms and transmission methods, and thus its variants are named DENV-1, DENV-2, DENV-3 and DENV-4.

Since the latest coronavirus also originates from bats, uses the same receptor to infect cells and shares nearly 80 percent of its genetic material with the SARS virus, it is natural for scientists to add a numeral behind it to signify their relation

The virus for the SARS epidemic in 2003 was named SARS-CoV. Since the latest coronavirus also originates from bats, uses the same receptor to infect cells and shares nearly 80 percent of its genetic material with the SARS virus, it is natural for scientists to add a numeral behind it to signify their relation.

However, to the untrained eye, simply adding a '2' behind the SARS virus may lead the public to perceive the new virus as a direct descendant, rather than a close relative, to the pathogen that caused China's first major viral outbreak in the 21st century, according to The Intellectual, a public WeChat account founded by renowned scientists including neuroscientist Rao Yi.

SARS's visible symptoms are also more serious, and it has a higher death rate, around 9.6 percent, than the novel coronavirus, which is estimated to be around 2 to 4 percent, according to the Chinese Center for Disease Control and Prevention.

Therefore, the SARS virus still strikes a sensitive nerve in the Chinese public, and scientists have been very careful when comparing the two coronaviruses.

On Sunday, virologist Chen Huanchun made a public apology for mistakenly saying the novel coronavirus is a type of SARS virus, which caused panic on Chinese social media as the public thought that the novel virus and the SARS virus were the same. It led to prominent scientists scrambling to debunk the claim.

The Intellectual reported that many Chinese scientists are dissatisfied with the formal name for the virus, including Shi Zhengli, the virologist who discovered the new virus's bat origin. She said they are giving suggestions to the study group to possibly amend the name.

Other names for the virus have been discussed recently in the Chinese scientific community, including TARS-CoV, HARS-CoV, CARSCoV and PARS-CoV. The "ARS "represent acute respiratory syndrome, with T standing for transmissible, H for human, C for contagious and P for pneumonia.

It is unclear whether the ICTV will take these suggestions into consideration.

Also on Tuesday, the WHO named the disease caused by the virus COVID-19, meaning coronavirus disease discovered in 2019. WHO Director-General Tedros Adhanom Ghebreyesus said the name is neutral, pronounceable and related to the disease.

"Having a name matters to prevent the use of other names that can be inaccurate or stigmatizing," he said. "It also gives us a standard format to use for any future coronavirus outbreaks."