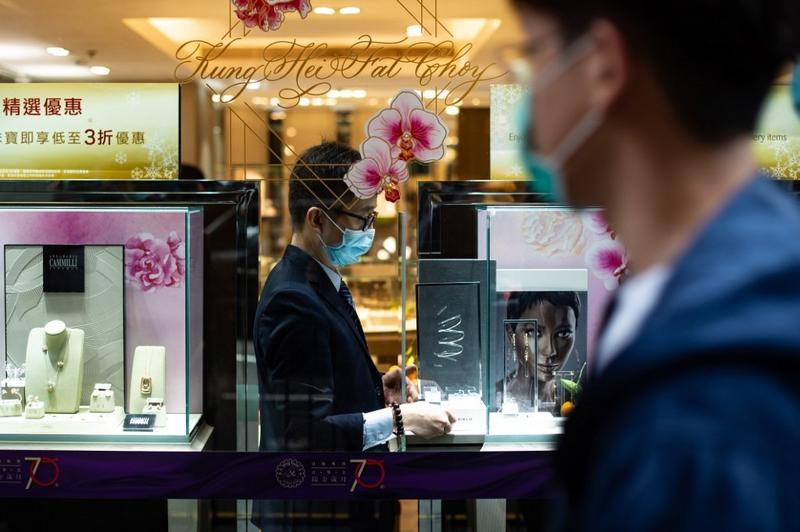 A mask-clad pedestrian (right) walks past a jewelry shop as a masked staff member works inside in Central district in Hong Kong on Jan 23, 2020. (PHILIP FONG / AFP)

Major shopping mall landlords in Hong Kong are offering cuts in February rent by as much as 60 percent to help tenants ride out the effects of the coronavirus outbreak.

Hong Kong’s retail sector, battered by months of often violent anti-government protests stemming from the extradition bill incident, is likely to suffer in the coming months as the outbreak has emptied shopping centers and closed down tourist attractions on the mainland.

Henderson Land said it would cut February rent by 20% to 60% for its small- to medium-size tenants in retail, food and beverage, as well as education businesses following similar moves by its peers

Henderson Land said it would cut February rent by 20 percent to 60 percent for its small- to medium-size tenants in retail, food and beverage, as well as education businesses following similar moves by its peers.

“Hong Kong’s retail and food and beverage businesses have been greatly affected since February due to the outbreak of the novel coronavirus outbreak,” Henderson Land said in an emailed statement on Thursday.

The city’s largest property developer by value, Sun Hung Kai Properties, which owns major district malls that host international fashion brands ranging from Coach to Zara, said on Wednesday it would reduce February rent by 30 percent to 50 percent for most of its tenants.

New World Development, whose tenants include many luxury brands, also said it would reduce the February rent, while MTR Corp, which runs malls on top some of its subway stations, said it would adjust rent for small-medium sized companies.

MTR also said it would launch relief measures for its chain and international brand tenants after collecting their sales data.

Link Asset Management, the manager of Link Real Estate Investment Trust, announced it had established an HK$80-million scheme to support its small and medium-sized tenants to relieve their operating pressure

Wharf Real Estate Investment announced in an internal email a similar move for its Harbour City shopping center, dropping this month’s rents by half, according to media reports on Wednesday.

Some small tenants confirmed that they have been informed about the rent cut. The shopping mall declined to disclose the detailed information on the arrangement for now.

According to Wharf’s interim results, Harbour City’s average passing rent grew by 4 percent year-on-year to HK$508 per square foot per month. Occupancy reached 96 percent at the end of June 2019. Revenue from Harbour City increased 5 percent to HK$6,165 million in the first six months of 2019. It remained the key driver of Wharf, contributing 73 percent of total revenue.

Earlier on Tuesday, Link Asset Management, the manager of Link Real Estate Investment Trust, announced it had established an HK$80-million scheme to support its small and medium-sized tenants to relieve their operating pressure.

The Real Estate Developers Association of Hong Kong also said in a statement on Tuesday that its members have been and will continue to explore, on a case-by-case basis, feasible ways to give relief from operating pressure, including offering rental concessions, to those in need.

Chinese mainland visitors, who used to come to the special administrative region to buy everything from luxury watches to discount cosmetics, plunged 53 percent in December from a year earlier. That’s set to fall even further after the government announced last week a 14-day mandatory quarantine measure for people arriving from the mainland.

Edith Lu contributed to this report