Coming to a living room near you

A bid to create intimate, informal performance spaces for genuine connoisseurs of music has grown into a worldwide movement, with a highly successful HK chapter. Neil Li reports. 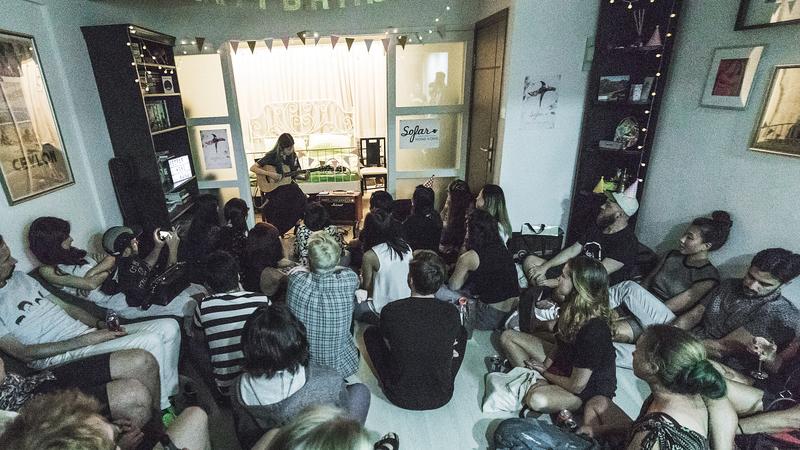 You’ve got tickets to see a music performance, but you don’t know what kind of musicians will be playing. You have an idea of the neighborhood where the show will take place, but won’t find out the exact location until the day before. When you arrive at the venue, you discover it’s the living room of someone’s home. There is no professional lighting or sound systems. Instead, you find 30 or so people sitting on the floor or on sofas while a lineup of three musicians play a stripped down set just steps away from the audience. Welcome to a Sofar Sounds show.

Focus back on the music

The idea of Sofar Sounds germinated in London in 2009 when founder Rafe Offer and several friends became increasingly frustrated with their experiences at live events. Whether it was people talking throughout a show or recording or using their phones, there were too many distractions taking attention away from the musicians and the music. So they thought of hosting performances with small groups of friends and musicians in their living rooms. Soon, their friends and friends-of-friends were inspired to do the same thing in their own cities.

Since then, Sofar has become active in more than 440 cities around the world and the number continues to grow. In large cities such as London, the local Sofar team organizes shows at two or three different locations every night. In Hong Kong, the scene is smaller. Around 30 shows have been hosted by Sofar Sounds Hong Kong since they started in April 2017. Set up by a group of music lovers who wanted to enrich the local music community, Sofar concerts were well-received in Hong Kong from the very beginning.

“It’s pretty special because I don’t think anyone is doing anything like that here. We were sold out from day one, as many people had heard of Sofar elsewhere,” says Max Humberstone, who runs Sofar Sounds Hong Kong. “They craved it in Hong Kong because it’s a lot more difficult to catch a good gig here when compared to other cities. So the early audiences were really appreciative and enjoyed it.”

While Sofar Hong Kong has had no shortage of hosts offering them space, the original premise of hosting shows in a living room has not always been possible. Large living rooms that can accommodate 30 to 40 people are hard to come by in Hong Kong, a city perennially suffering from space crunch, The team has organized shows at small commercial spaces such as studios and cafes where they can best deliver the authentic and intimate Sofar experience.

“The Sofar brand has branched out, which I think is great because besides supporting local artists, it’s also supporting local businesses,” Humberstone says. “I’ve been to several Sofar shows around the world — held in a local brewery, for instance — getting people into places that perhaps they wouldn’t have always heard of, so it’s just like helping everyone.”

Despite the difficulties, some performances have taken place in homes. To celebrate Sofar Sounds’ 10-year anniversary last year, the Hong Kong team held a show in the living room of a flat in Sai Ying Pun, accommodating 30 people into the space. “It wasn’t a big room, but the hosts were able to open up the living room into their bedroom. So the artist basically sat on the end of their bed and played to the living room. It was just beautiful,” says Humberstone. Musicians who have performed at Sofar Hong Kong have found the experience to be unique and special. Jazz and blues guitarist Tjoe Man Cheung has performed for them twice, once as a supporting guitarist for another artist and another time with his jazz band, NTBM (not-to-be-missed).

“As a musician, I think it’s a great opportunity for me to connect with the audience and spread my music. The people who go to Sofar shows are typically very curious about music so they’ll attentively listen and are very engaged, which creates a great vibe,” he says. “Sometimes this is more rewarding than money for musicians because audience participation is so important to a show.”

Tjoe has also performed with Sofar Sounds London in 2015, and he says the Hong Kong team have done a great job of replicating the experience of cutting the distance between musicians and their audience. He says Sofar Hong Kong has helped enrich the music knowledge of local audiences, featuring relatively less-known musicians, often featuring musicians representing three different music genres in the course of a single show. “The audience is introduced to musicians or bands that they normally wouldn’t have heard,” says Tjoe, adding that usually the audience wants to hear more of the new music they are hearing for the first time.

The audiences aren’t the only ones to be introduced to new musicians at a Sofar show. Humberstone points out that local rapper Matt Force and singer SOPHY collaborated on a song together last year after coming across each other’s music during a performance at the same Sofar show.

“We’re not driven by money, rather by just creating a community of music lovers, and artists. We’re aiming to bring together that music scene,” he says.

One living room at a time

Tjoe and Humberstone have seen an increasing number of live houses and performing venues close down in the city recently. But they say this doesn’t reflect diminishing interest in live music, as Sofar Hong Kong shows are always oversubscribed, sometimes as much as ten times over. There are also plenty of local musicians that they want to feature and Humberstone is enthusiastic about the quality of music being put out by musicians in the city. “There are pockets of certain music genres here that are really strong such as post rock and instrumental music. The hip hop scene is rapidly growing as hip hop nights at local venues will typically sell out,” he says.

Humberstone and his team plan to keep building on the success of Sofar Sounds. “We have a lot more wonderful hosts to choose from and we’re still aiming to get in living rooms.”