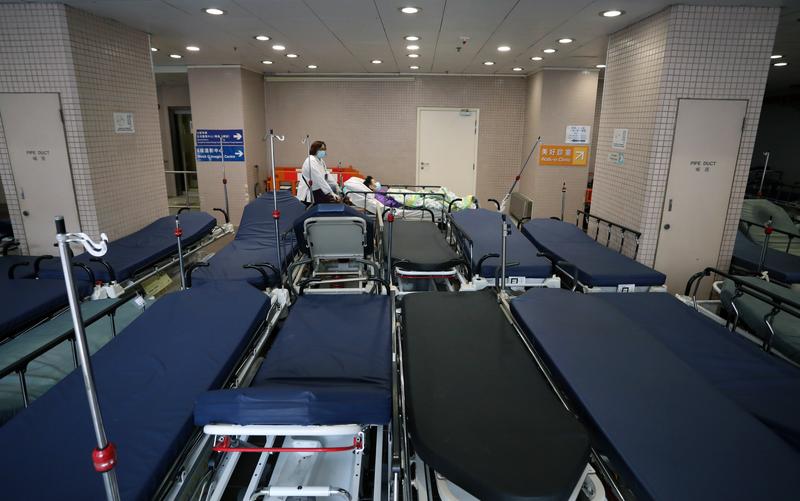 A nurse wheeling a patient at Queen Elizabeth Hospital was among the handful of medical staff staying on the job on Tuesday, when hundreds of doctors and nurses at the hospital were reported to have joined in an industrial action staged by thousands. (CALVIN NG / CHINA DAILY)

Hong Kong’s healthcare authorities on Tuesday warned of a possible coronavirus outbreak in the local communities as the unidentified sources of the four latest cases — two confirmed, two suspected — suggest.

Neither of the two confirmed patients on Tuesday, a 64-year-old female who owns a clothing store in Jordan, and a 60-year-old male retiree living in Kwun Tong, had traveled outside Hong Kong recently. Experts are not sure how they have been infected with the virus.

Department of Health and the Hospital Authority

Chuang Shuk-kwan, head of the Communicable Disease Branch of the Centre for Health Protection of the Department of Health, said the cases pointed at possible community transmission and did not rule out the possibility of mass infection in Hong Kong.

The coming 14 days will be key to controlling the spread of the virus in Hong Kong, according to the Department of Health and the Hospital Authority.

The warning came hours after a 39-year-old man, who was the 13th confirmed case of virus infection, died at Princess Margaret Hospital. It was the first death among the city’s 18 confirmed cases.

The patient had diabetes, and the link between his underlying illness and the cause of his death remains unknown. He visited Wuhan of Hubei province, the epicenter of the virus outbreak, on Jan 21 and returned to Hong Kong from Changsha of Hunan province two days later.

Of the 18 people diagnosed with the infection in Hong Kong, two are still in critical condition and receiving intubation treatment.

Meanwhile, more than 4,400 local medical practitioners from public hospitals, including 2,500 nurses and 350 doctors, have continued the strike since Monday to demand a complete border shutdown.

The Hospital Authority revealed about 100 absences from emergency services, while in neonatal intensive care units, more than half of the nurses were absent. About 30 percent of nurses for cancer and radiology services also joined the strike, which has led to delays of surgeries.

Also on Tuesday, the Macao government announced that all of the casinos will be shut down for 15 days as the special administrative region confirmed two residents have been infected by the novel coronavirus, taking the tally of cases to 10.

Macao Chief Executive Ho Iat-seng said the disease should be taken seriously as three of the 10 patients were local residents.

The Macao leader reiterated that so far he had no plan to close the border with the Chinese mainland because many Macao residents, including cleaners, security guards and fresh produce market workers, resided in the neighboring city of Zhuhai.