How a century-old Olympic dream transforms a railway

A high-speed train passes through the Juyongguan section of the Great Wall in Beijing on the Beijing-Zhangjiakou high-speed railway, which opened on Dec 30, 2019. (LEI SHENG / FOR CHINA DAILY)

BEIJING - The high-speed railway line connecting Beijing and Zhangjiakou, the co-host city of the Beijing 2022 Winter Olympics, was put into operation on Dec 30, 2019, marking another important step ahead of the Games.

With two years to go, as Beijing accelerated its preparations to go beyond China's century-old dream to host an Olympic Games, the century-old Beijing-Zhangjiakou railway has also been transformed.

Zhan Tianyou, known as the "Father of China's railway", finished the construction of the Beijing-Kalgan (Zhangjiakou) railway two years ahead of schedule, using a winding track to overcome the steep gradient in the mountainous area near the Great Wall

In the exact same year as Zhang planted the seeds of an Olympic dream in Chinese people's minds, Zhan Tianyou, known as the "Father of China's railway", finished the construction of the Beijing-Kalgan (Zhangjiakou) railway two years ahead of schedule, using a winding track to overcome the steep gradient in the mountainous area near the Great Wall.

The train would move its locomotive from the front to the back to change direction at Qinglongqiao station, where Yang Cunxin and his father worked for a combined total of 68 years.

19-year-old Yang took up the job at the station after his father retired in 1981, and gave a rather lukewarm response when describing his job.

"Simple, repetitive and boring, that's what working at a railway station is like," said the 58-year-old, who admitted he had tried to find another job but failed.

Yang had reason enough to complain. He had to stay up for 24 hours for a shift and pulled railway switches for over 20 trains in his first years. Only once in his 38 years at the station was he able to get time off to celebrate Chinese New Year with his family.

What motivated him to stay was the rich history of this first railway that went through the Great Wall, designed and built exclusively with Chinese labor. After frequently being asked about the railway's provenance by travelers, he began to read articles and books on the station and visited Zhan Tianyou's family.

The more he learned, the more fascinated he became.

"I feel extremely honored and proud to devote all my life to this historical station," Yang told Xinhua.

Before Yang became a small part of the station's history, China had already written its name into Olympic history.

At the Los Angeles Olympics in 1932, sprinter Liu Changchun competed in the men's 100m and 200m with the support of Zhang Bolin. The world's most populous country finally had one man competing in the Olympic Games. 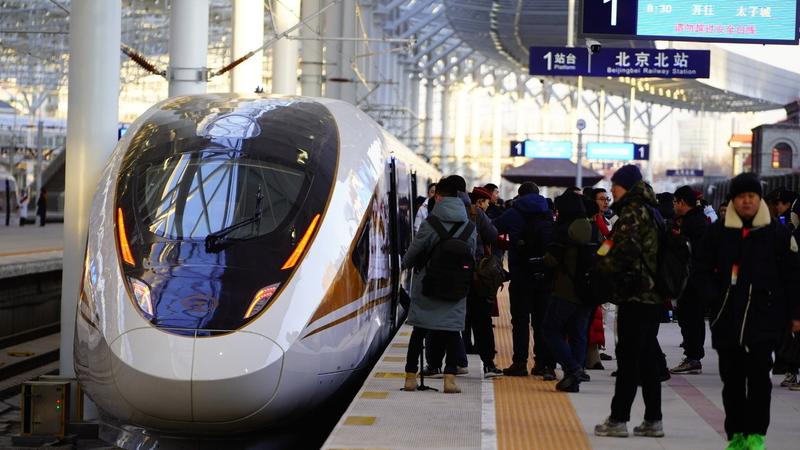 FULFILLMENT OF A CENTURY-OLD DREAM

Dazzling fireworks painted the night sky with bright colors. Golden giant footprints traversed along the axis of Beijing from Tian'anmen Square to the Bird's Nest stadium to mark the opening of the 2008 Beijing Olympic Games.

On August 1, a week before the opening ceremony, the Beijing-Tianjin intercity railway went into operation, ushering in China's high-speed rail era.

After a successful 2008 Games, this time the Chinese capital will stage the 2022 Olympic Winter Games, making it the first city in the world to host both summer and winter Games

With faster choices available, fewer and fewer trains would stop there. Finally, the station ceased to hold passenger trains, instead providing a technical stopover for the suburban railway Line S2, which opened two days before the opening ceremony.

This helped trigger the station's rebirth as it helped bring it to the attention of the government's industrial heritage investigation team, who restored it to its original state in the early 20th century, thanks to experts from the Capital Museum and Yang's own knowledge.

The station became a tiny museum and Yang assumed a new role. When visitors came to take a glimpse into China's railway history, the station master became a tour guide.

"In the past, passengers of different genders weren't able to stay together in one waiting room. This one is for male passengers, and the one on the opposite side is for females," Yang introduced.

"This is an advertisement of the American company that manufactured the locomotive used to climbed the gradient on the zigzag section."

Busy with both restoration and his regular duties, Yang admitted that he did not have much time to watch the Olympic Games on home soil.

And he was not the only one to miss the "extraordinary" Games, as it was hailed by then-IOC president Jacques Rogge.

During the Games, Zhang Shijie was working extra hours at China Railway Engineering Consulting Group with his colleagues, figuring out railway designs.

"Work occupied our minds. Sometimes we hoped meals could go directly into our stomachs without having to eat," Zhang said. "My only memory of the Games was that China won a lot of gold medals, even edging the United States to top the tally."

Born in Zhangjiakou, he had to go through Beijing to travel to his grandmother's hometown in Shandong Province, and the zigzag track at Qinglongqiao station was a regular feature of his childhood.

"I remembered the train was really slow. It left at around 7:15 a.m. and would not arrive in Beijing until almost 1 p.m.," recalled Zhang, who never thought that one day he would visit Qinglongqiao station numerous times to design a high-speed rail link that cut the travel time between Beijing and his hometown to under one hour.

GO BEYOND THE DREAM

"Beijing!" The city's name was called for a historic second time to be the host city of an Olympic Games at an IOC Session in Kuala Lumpur on July 31, 2015.

After a successful 2008 Games, this time the Chinese capital will stage the 2022 Olympic Winter Games, making it the first city in the world to host both summer and winter Games. 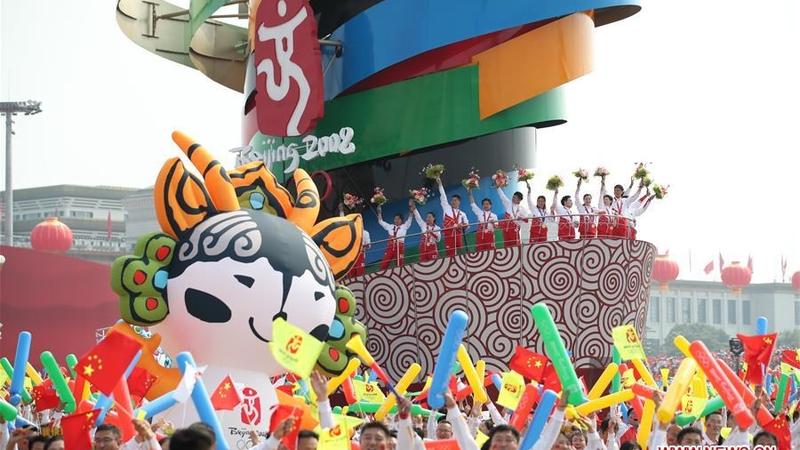 A formation highlighting the 2008 Beijing Olympics takes part in a mass pageantry during the celebrations marking the 70th anniversary of the founding of the People's Republic of China (PRC) in Beijing, capital of China, Oct. 1, 2019. (MENG YONGMIN / XINHUA)

The historic moment was witnessed by Zhang Shijie, who became head subgrade engineer of the Beijing-Zhangjiakou high-speed railway, and he celebrated, arms aloft, with his team members in front of his computer.

"Our railway will serve as an important part of the Olympic infrastructure!" Excitement brewed in Zhang's heart.

At the same time, the successful bid brought greater responsibilities and a tighter schedule.

"You never know the sense of responsibility of working on a big project until you are on one. At that time, as long as we were awake, we were on the construction sites. We totally gave up our leisure time and hobbies," Zhang noted.

Across 100 construction sites, the 38-year-old had a clear knowledge of the conditions of every single one of them. He even walked with his team from Donghuayuan County, about half the total length of the track, to Zhangjiakou, inspecting the 90 kilometers with his feet, and doing so more than once.

Qinglongqiao station was also one of the places he visited a lot.

"Our railway goes below the old Beijing-Zhangjiakou railway. The ceiling of the tunnel comes as close as four meters to the old track. We gave careful consideration to every detail to minimize the influence to the historic site," he said.

Sitting on the test train before the railway officially went into operation on Dec. 30, 2019, Zhang and his team members were overwhelmed by emotion as memories of their designs, inspections and even debates flooded their minds.

"This railway is like our child. We were so worried it was not well-developed, or not as good as others," Zhang said. "It is a line I will never forget in my life."

"We had huge leaps forward in high-speed railway technology, but where did it all start? Right here! The first railway entirely designed and built by us Chinese!" Yang pointed down to the earth with his head held high.

"The Qinglongqiao station has borne witness to two historic encounters. Over a century ago, the railway went through the Great Wall, with Western industrial civilization meeting traditional Chinese culture. Now the high-speed rail crosses with the old track, demonstrating that China has developed from being a learner to a leader."