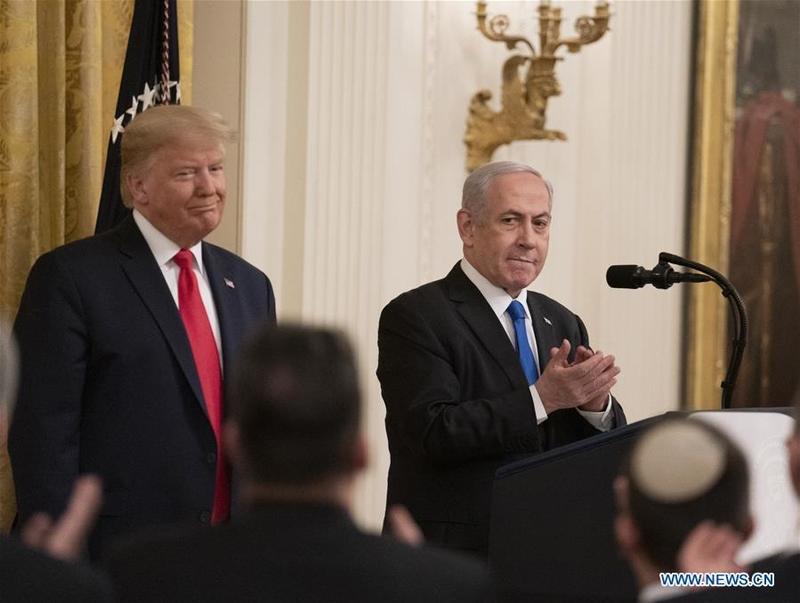 US President Donald Trump announced what he called a detailed plan for Middle East peace that provides a “win-win” solution to make Israel and the region safer, but the hurdles to the proposal quickly emerged as Palestinians and some Arab nations signaled their opposition.

At a White House event Tuesday alongside Israeli Prime Minister Benjamin Netanyahu, Trump said his plan offered a “contiguous” territory for a Palestinian state once key conditions are met, including the “rejection of terrorism.” The proposal opens a transition to a two-state solution that leaves Jerusalem as Israel’s “undivided capital,” Trump said to applause from an audience with casino magnate and Republican donor Sheldon Adelson in the front row.

Speaking after Trump’s presentation, Palestinian Authority President Mahmoud Abbas said “we say ‘no,’ and a thousand times ‘no”’ to the Trump vision

“Today Israel takes a big step towards peace,” Trump said. “My vision presents a win-win opportunity for both sides. There’s nothing tougher than this one, but we have to get it done.”

But the pomp of the ceremony belied the widespread view outside the White House that the plan is probably dead on arrival. Palestinian officials weren’t consulted on the proposal, and many of the details divulged on Tuesday -- including Israel getting a green light to annex existing West Bank settlements -- ensure it will struggle to gain traction.

Speaking after Trump’s presentation, Palestinian Authority President Mahmoud Abbas said “we say ‘no,’ and a thousand times ‘no”’ to the Trump vision. In a televised address from his headquarters in Ramallah, Abbas vowed to begin dissolving the Palestinian Authority, leaving a void in the region.

Netanyahu said at the White House that it may take the Palestinians “a very long time” to get an independent state, but “if they agree to abide by all the conditions you’ve laid our in your plan, Israel will be there.”

For the first time since peacemaking began almost three decades ago, the plan jettisons what had been articles of faith in previous rounds of US-led negotiations, including some version of joint sovereignty over Jerusalem and viewing Israel’s borders before the 1967 Middle East war as the foundation for a peace agreement.

A map Trump tweeted out after the presentation showed a patchwork of Palestinian territory, portions of which were linked only by a road or tunnel, featuring vague developments such as a “high tech manufacturing industrial zone” along the border with Egypt that currently don’t exist.

“This is the first time in the history of the peace process that there’s been an official map that was drawn,” Kushner said in a Bloomberg Television interview.

Trump said his proposal would require the Palestinian Authority to adopt “basic laws” on protecting human rights, fighting corruption, stopping malign activities of Hamas and Islamic Jihad, ending financial compensation to terrorists and stopping incitement against Israel. He said territory destined for Palestinian control would stay undeveloped for four years to give space for talks with Israel to progress.

A fact sheet distributed by the White House indicated that Israel won’t have to surrender settlements built across much of the territory that’s claimed by Palestinians. The plan also rejects a key Palestinian demand -- the “right of return” by Palestinian refugees. Instead, refugees and their descendants who have long sought to return to Israeli-controlled territory will have to choose between remaining in Palestinian lands, moving to a third country or integrating into the country they currently live in.

The Palestine Liberation Organization’s negotiations affairs department said in a tweet that “the US plan recognizes Israel’s illegal colonization and annexation of occupied lands belonging to the State of Palestine.”

Jordan, a key US ally, rejected the US proposal and said in a statement that a Palestinian state must be negotiated based on Israel’s 1967 borders. Jordan warned Israel against annexing Palestinian lands.

But Netanyahu signaled he’s moving fast to implement portions of the proposal beneficial to Israel -- and possibly to his political future ahead of March elections. His government will vote Sunday on a proposal to annex West Bank territory where settlements stand. Palestinians consider those settlements illegal. 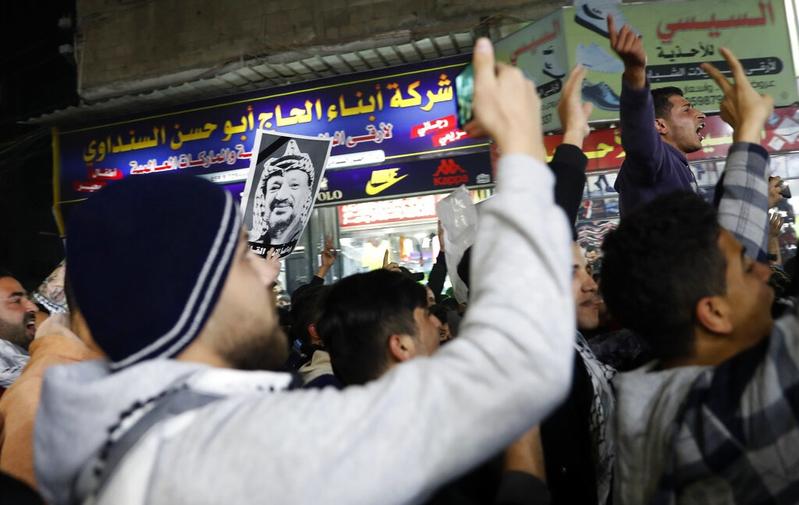 While Trump and Netanyahu were speaking in Washington, hundreds of Palestinians demonstrated in the Gaza Strip, mainly in Gaza city center. They burned Israeli and US flags as well as a puppet of Trump.

Khalil al-Hayya, a senior Hamas leader said Trump’s plan “is nonsense. It is a hostile deal, and the Palestinians will exert all possible efforts using all means to confront it, until it is toppled.”

ALSO READ: US to promote investment in Palestinians as part of peace plan

Paul Scham, executive director of the Gildenhorn Institute for Israel Studies at the University of Maryland, said moving forward with a plan that isn’t backed by the Palestinians is “strange, to put it mildly.”

“The consensus among people who follow this is that this is really solely a political stunt because it will help Netanyahu in his ongoing election, March 2, and will presumably help Trump as well with his base,” Scham said. The proposal may shore up Trump’s backing from evangelical Christians, who are stalwart defenders of Israel, as well as conservative Jewish contributors, for his November re-election bid.

At Abbas’s request, the Arab League will meet in an emergency session in Cairo on Saturday.

Iranian Foreign Ministry strongly rejected the US Middle East peace plan as "disgraceful", while Turkey said the plan as "stillborn"

In a statement released hours after Trump's announcement of the so-called Deal of the Century, Iranian Foreign Ministry Spokesman Abbas Mousavi said it is the "betrayal of the century" and is "doomed to failure."

"Palestine belongs to the Palestinians," he said.

Arab League (AL) Secretary General Ahmed Aboul-Gheit said that imposing any solutions to the Palestinian-Israeli conflict will not succeed.

He said the US Middle East peace plan will be discussed during the upcoming emergency ministerial meeting of the AL council in a way that guarantees Arab and Palestinian interests.

Aboul-Gheit highlighted negotiation between the Palestinians and the Israelis as the only way to achieve a real, serious and balanced peace deal.

EU high representative for foreign affairs and security policy said the EU will study and assess the US Middle East peace plan, pledging the EU's "firm and united commitment to a negotiated and viable two-state solution", and reaffirming the EU's readiness for resuming negotiations between Israel and Palestine.

The Turkish Foreign Ministry said on the peace plan announced by Trump was "stillborn."

"This plan is an annexation plan aiming to destroy the two-state solution and seize Palestinian territories," the ministry said in a statement.