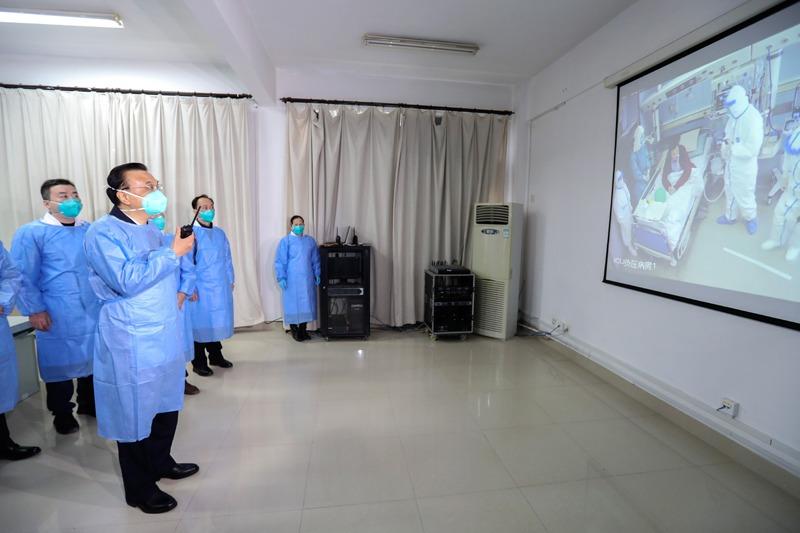 Premier Li Keqiang arrived on Jan 27, 2020, in Wuhan, the epicenter of the novel coronavirus outbreak, to offer guidance on epidemic control and prevention. (PHOTO / GOV.CN)

Entrusted by President Xi Jinping, Premier Li Keqiang arrived on Monday in Wuhan, the epicenter of the novel coronavirus outbreak, to guide epidemic control and prevention.

Premier Li Keqiang made Jinyintan hospital, which has the largest number of infected patients and those in critical condition in Wuhan, his first stop

Li, who is the head of a leading group of the Communist Party of China Central Committee on coping with the novel coronavirus, a pneumonia-causing virus, will visit and express regards to patients and medical workers.

China will send more medical workers, especially nurses, and resources to support epidemic control in Wuhan, the epicenter of the novel coronavirus outbreak, Premier Li Keqiang said in an inspection trip to the city on Monday.

Li extended his best regards to medical workers and offered instructions to work to contain the pneumonia-causing virus during his trip to the capital of Central China's Hubei province.

Li made Jinyintan hospital, which has the largest number of infected patients and those in critical condition in Wuhan, his first stop.

He said he hoped medical workers will spare no effort in treating patients while ensuring their own safety.

Their endeavors can offer a confidence boost to the whole nation, and people across the country will be grateful to them, he said.

He required immediate action be taken to address problems such as the unstable supply of protective materials, such as protection suits and safety goggles, and the lack of nurses.

Everything must give way to the race against time to save patients, he said.

Li visited the construction site of the Huoshenshan hospital, an emergency specialty hospital under construction in response to the outbreak.

He encouraged workers to work extra hours to speed up construction.

The fight against the outbreak is like saving people from a disaster, and the hospital, after its completion, will become a refuge that can accept and treat patients in a timely manner, he said.

The government will do everything within its capacity to ensure that all patients receive treatment, he said, adding that workers must protect themselves against the virus during the construction process.

The premier stopped by a supermarket in the city and learned about the supply of commodities and their prices. 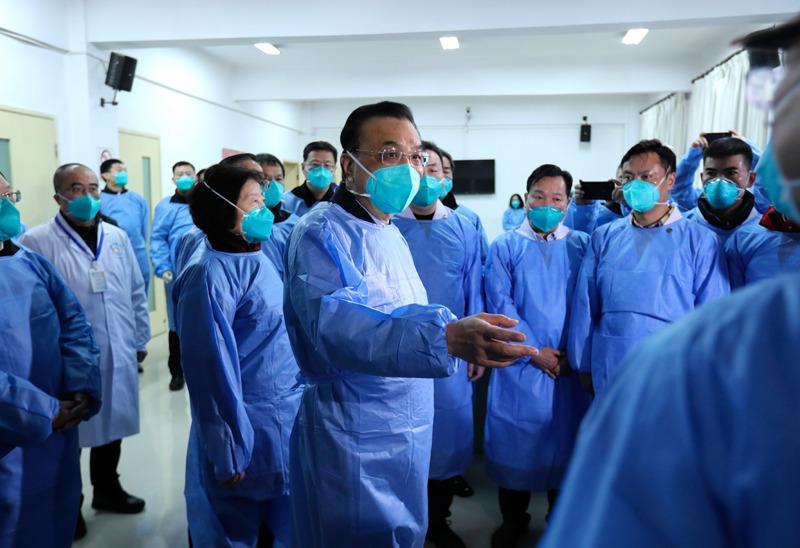 He told residents at the supermarket that the whole country stands behind them, and he assured them that the government can ensure adequate market supply and a stable price of commodities in the city.

Li also presided over a work conference on epidemic control in Wuhan.

He said the country will send another 2,500 medical workers, especially nurses, to support the city and another 20,000 safety goggles will arrive on Monday afternoon.

Multiple measures will be adopted to ensure the city's daily supply of protection suits, he added.

Going forward, the country will meet the demands from the city, either in terms of personnel, materials or funds, he said.

He also urged the provincial government of Hubei province and Wuhan municipal government to assume their duties, make all-out efforts for epidemic control and prevention and make public official information in a timely manner.

The ultimate goal is to lower the incidence rate and the mortality rate from the novel virus so that the epidemic can be put under effective control and the life and health of the people can be safeguarded, he said.

China has so far sent over 2,000 medical workers from 14 provincial areas and the military to Wuhan to help with epidemic control and treatment as of Monday, according to the National Health Commission.

The number of cases of infection in Hubei province reached 1,423 as of Sunday, with 76 deaths and 69 people in critical condition, according to the provincial authority.