Land of the wild man

By Zheng Jinran and Liu Kun

Named for a figure from Chinese mythology, Shennongjia Forest District in the remote mountains of Hubei province has a curious ancient story to tell. The mysterious Wild Man－China's Bigfoot－is said to roam at will. But the district also stands in the real world. 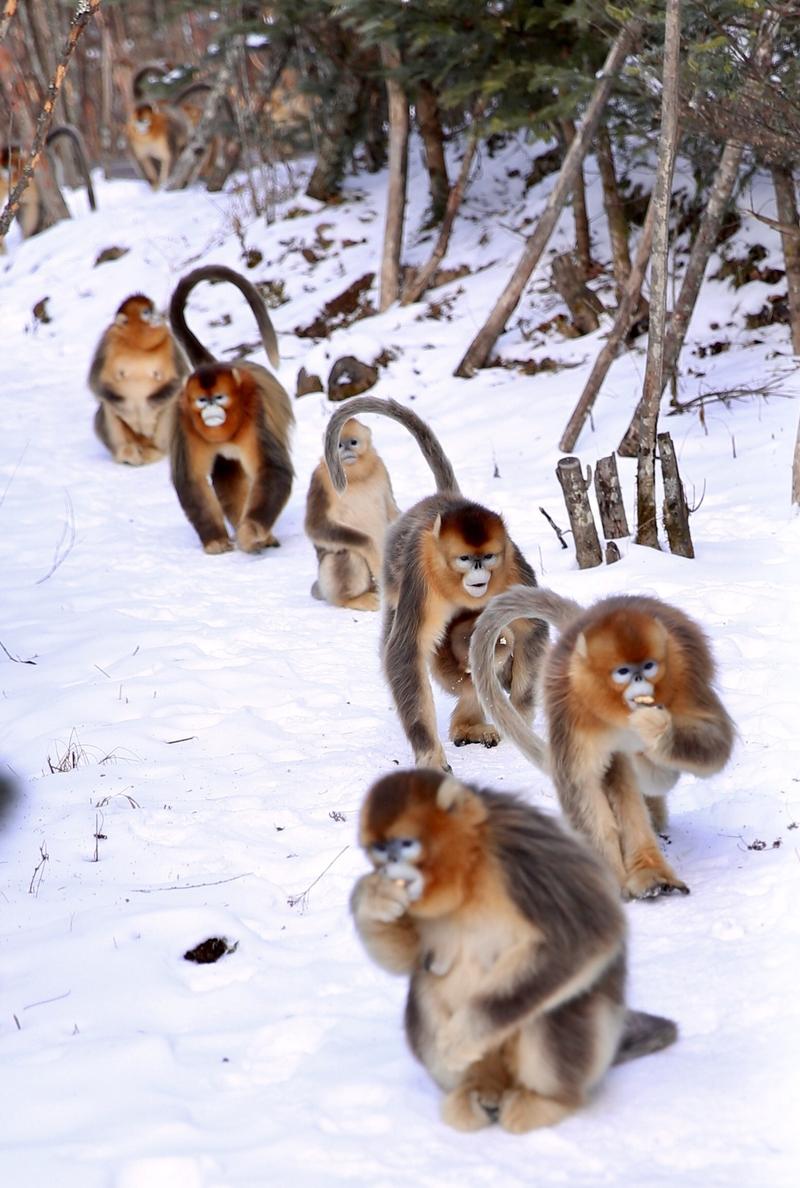 1. Getting back to green

Shao Dingchun followed in his father's footsteps as a logger, starting in 1980 at age 20. Cutting trees was the way his family, and the region, was supported.

It was his job, along with others, to supply 200,000 cubic meters of logs annually to support the country's construction during the first decades after the founding of the People's Republic of China.

But lumber resources dwindled dramatically. Trees were sparse in the mountains near Shennongjia after decades of cutting. Coverage fell to 63.4 percent in the 1980s from 85 percent before the massive clearcutting began, according to the government.

"The mountains looked barren. Only a few small trees were left, and we were told that within five years the forest would be gone if cutting continued," said Shao, recalling the regional government's earnest warning. "We didn't have other options." 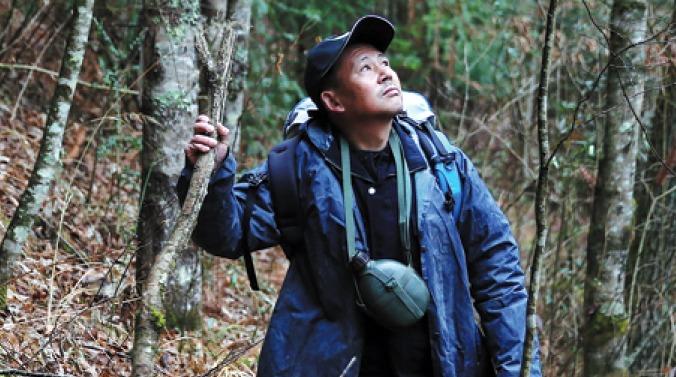 Ex-logger Shao Dingchun, conducts one of his regular patrols in the Shennongjia Mountains on Dec 25. (ZOU HONG / CHINA DAILY)

He shut down his machinery in 2000, when all cutting was forbidden, and he became a protector of the forest as the government asked. Thousands of others had to find jobs outside their hometown.

Protectors like Shao paid close attention in their new positions, conducginb daily patrols conducted in designated zones to stop people from cutting. "We have to make sure all logging ends and that no harm comes to the animals," Shao said.

As of last year, the region's its forest coverage had increased to 91.1 percent, and no major fires had broken out, he said proudly.

What makes him be more proud is his son's decision in 2010 to work as a forest protector as well. "Three generations of our family work in forest, and we have adopted sustainable ways of dealing with the environment," said the son, Shao Ronghu, 33, who works at Shennongjia National Park.

The environment is getting better, with more animals and plants prospering in the woods, according to data collected by infrared cameras and professional surveys, he said. The upgraded technology makes the protection effort more scientific and systematic than in his father's tenure. 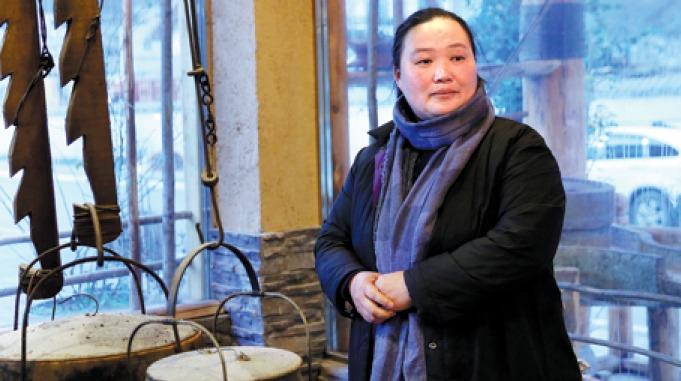 Golden snub-nose monkeys, an endangered species decimated by logging, were first observed in the Shennongjia region in 1978, when Chinese researchers came to the mountains in search of the Wild Man.

The forest district's cliffs, valleys and streams made favorable habitat, but logging and hunting had forced them to retreat to the high country. As the environment has improved in recent years, the monkey population has recovered－from 500 before the 1990s to 1,471 in 2019, according to the Shennongjia Golden Monkey Research Center.

"In addition, the monkeys have spread outside the central protection zone to neighboring regions," said Yang Jingyuan, director of the center, which is located in the mountains of Shennongjia. 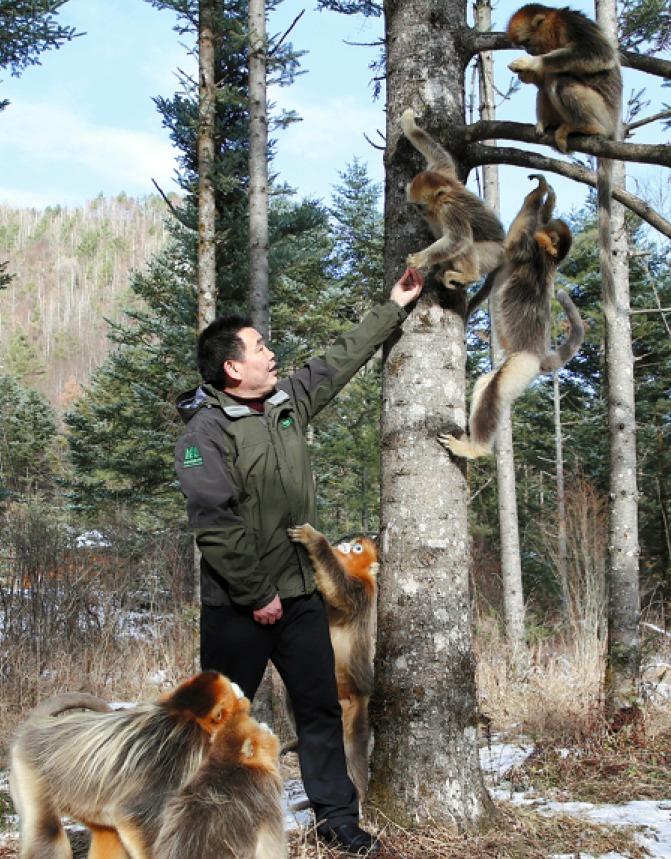 Yang Zhonglin, a staff member at the center, said golden snub-nose monkeys have blue faces and bright fur, as well as graceful and gentle movements.

Researchers have studied the animals and developed supplementary feeding methods, including the addition of sweet potatoes to their diet in winter, which greatly reduced deaths of baby monkeys, Yang said.

The monkeys live in families with a single alpha male as the leader, said Yang's nephew, Yang Zhonglin, who works at the center. He has become so familiar to the animals that he can plait the back hair of an old male monkey.

"You can feel their emotions and their attachment to us," he said. 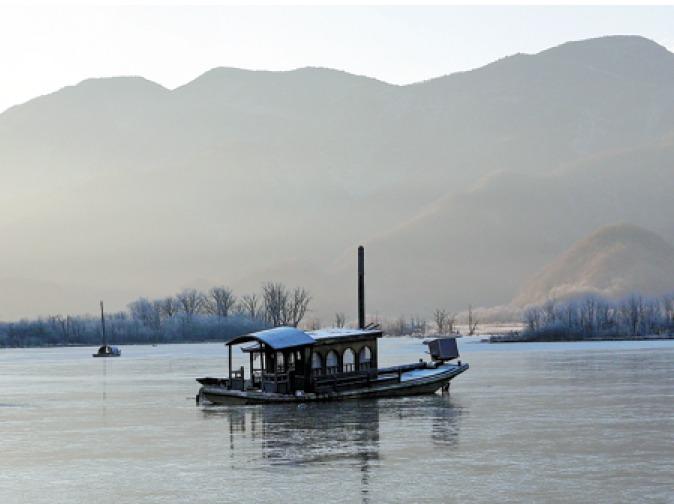 3. From legend to reality

Like the mythical Yeti of the Himalayas and the Sasquatch of North American folklore, the legend of Yeren, the Wild Man of Shennongjia, has lived in folk tales for centuries, dating to the late Qing Dynasty (1644-1911). The story got a boost in the 1970s when witnesses claimed to have seen the creature, said resident Luo Yongbin, a believer.

No physical evidence has been found.

But an amazing thing has, in fact, been observed in the forest district in recent decades－a sort of miracle born of planning and hard work. The region turned green again after massive logging ruined it. Protecting the forest is now seen as the way forward.

The region has acquired four impressive labels: UNESCO Global Geopark, World Heritage Site, Man and Biosphere Reserve and World Natural Heritage, recognizing the success in reviving the environment, according to the local government. 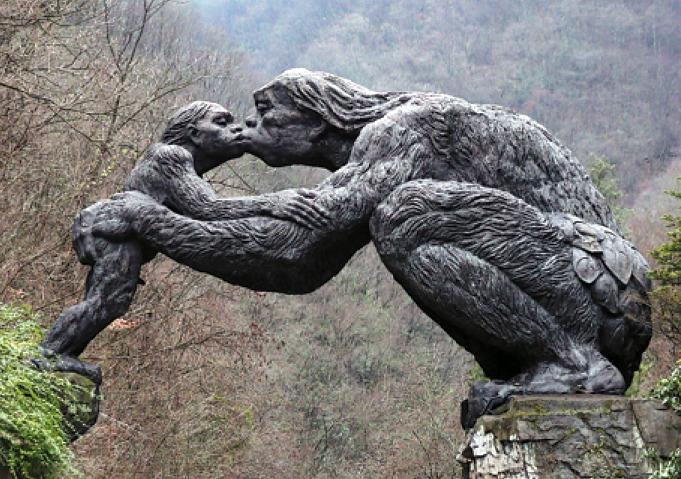 Along with its environmental recognition, Shennongjia Forest District was listed by the central government among China's nine pilot national parks in 2015.

The park, covers 1,170 square kilometers, around one-third of the district total, and overlaps with other reserves. Regulations establishing the park will help the various units work as a coordinated system, publicity officer Xiang Pingyang said.

A provincial regulation, passed in 2017, divides the national park into four zones, including a core region, which accounts for 53.5 percent of the total area. Human activity is strictly forbidden in the core zone, according to a 2018 white paper.

"We have set up a comprehensive surveillance network with satellites and land-based cameras," Xiang said.

The number of visitors in the scenic zones is sharply limited. 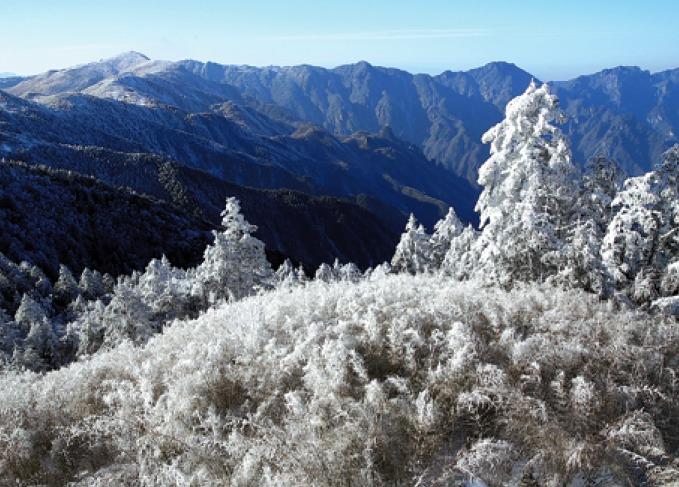 5. Where slow is good

Songbai, a town in Shennongjia Forestry District, was designated a "slow city" in June by Cittaslow－also known as the International Network of Cities Where Living is Good. It comprises towns that have adopted a common set of principles and objectives to enhance quality of life.

"We prepared for the slow city application for four years and tried our best to meet the standards," Dai said.

Membership of Cittaslow is open to towns of fewer than 50,000 residents. To be recognized as a Cittaslow member, a town must reject supermakets and fast food, among other criteria.

Slow cities provide people from frenetic big cities with a place to relax, slow down and enjoy life. 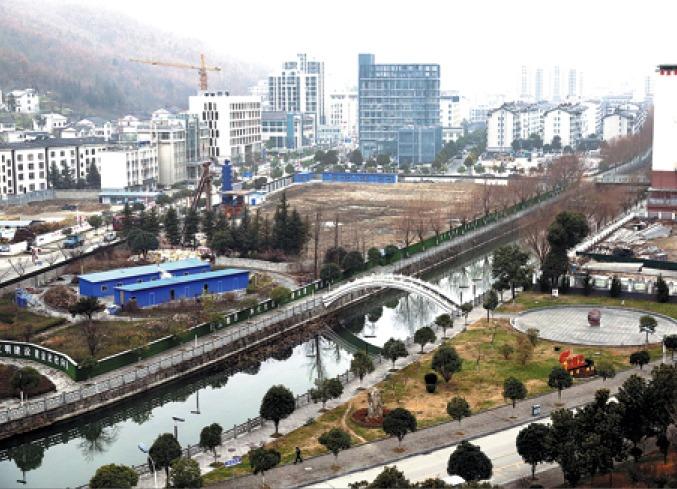 Songbai Town, a 'slow city' where people can get away and relax. (ZOU HONG / CHINA DAILY)

6. Moving out, moving up

Qin Wanmei, 43, became a millionaire in Shennongjia through her booming tourist catering business after moving out of her former home in Dajiuhu village for the sake of the environment. The old village lay along the shore of Dajiu Lake, an important wetland in the ecological system that helps provide drinking water to Beijing via the Southto-North water diversion project.

"Before we moved out, the village could handle 2,000 people at most," Qin said.

The flood of tourists and their vehicles caused severe traffic congestion on the muddy roads and produced masses of garbage and pollution. Water quality in the lake deteriorated, forcing the government to ban all tourism, crop planting and breeding. Residents were ordered out in 2012.

After relocating to a new village, Pingqian, in 2013, Qin opened three restaurants, which could handle around 1,000 tourists simultaneously. More than 1,400 villagers have a similar story, serving the flood of visitors who now come for the scenery and lifestyle.

"It has opened our eyes. We have a better understanding of society and the world," said Yang Yong, 30, whose family was poverty stricken before the move. The family relied on a small farm in the wetland area to make a meager living.

Back in 1900, when British botanist Ernest Henry Wilson first visited Shennongjia, the place was amazingly rich in plant and animal resources, including rare seeds of the Davidia involucrata, a plant with a 10-million-year history on Earth.

But the destruction wrought by massive exploitation of timber and other uncontrolled human activity took their toll. Now things are looking up again.

"I hope we will have more people come to enjoy the beautiful scenery and life here," said Shao Ronghu, 33, whose family worked in the lumber industry for three generations and witnessed the tremendous changes in dealing with the forest.

The Wild Man now has more places to roam without being seen.