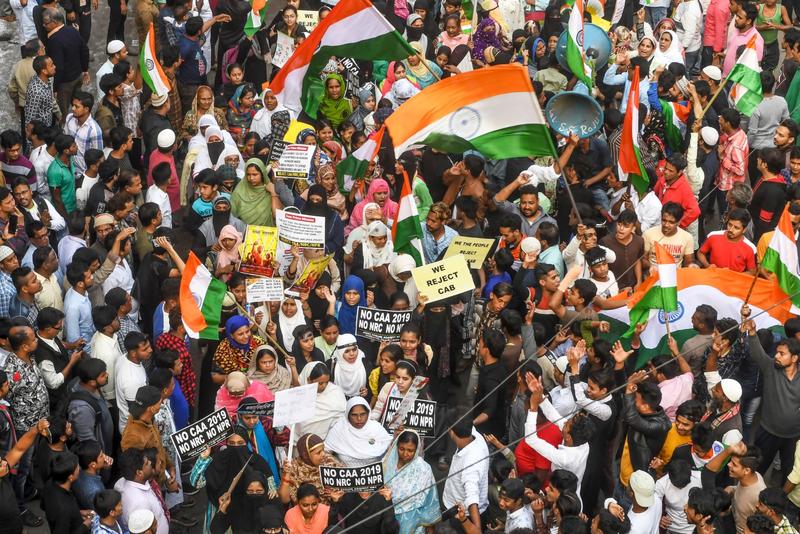 Protesters hold placards and national flags as they take part in a demonstration against India's new citizenship law, in Kolkata on Jan 21, 2020. (DIBYANGSHU SARKAR / AFP)

India’s top court has deferred a hearing on cases challenging the constitutional validity of a new law that introduced religion-based criteria for citizenship, sparking a month of often violent protests across the country.

A three-judge panel headed by Chief Justice of India S.A. Bobde on Wednesday said a larger constitution bench would consider requests to stop Prime Minister Narendra Modi’s government from implementing the Citizenship Amendment Act. The case will be heard again in five weeks, the court said without giving a date.

Petitioners including students, Muslim groups, lawyers, and politicians, say such discrimination on the basis of religion is not permitted under the constitution

At stake is the secular fabric of the Indian constitution and democracy, according to critics of the new law. It allows undocumented migrants of all faiths except Islam from neighboring Afghanistan, Pakistan and Bangladesh to seek Indian citizenship.

Petitioners including students, Muslim groups, lawyers, and politicians, say such discrimination on the basis of religion is not permitted under the constitution. Modi’s government has maintained the new law aims to give citizenship to persecuted minorities from the three neighboring countries and the protests are the result of fear mongering by the opposition.

India’s Attorney General K.K. Venugopal told the court the government was opposed to a stay of the act or postponing the process of preparing National Population Register.

“The act gives large powers to executive officers,” said lawyer K.V. Vishwanathan, who is arguing against the law. “There is fear not just among Muslim but anxiety among a large majority as well.”

Modi and his party leaders, including Home Affairs minister Amit Shah, have said the citizenship law is a precursor to a proposed national register of citizens aimed to “weed out illegal infiltrators”. The law was the third big push for Modi’s Bharatiya Janata Party’s hardline Hindu nationalist agenda after he won the second term in office last year with a sweeping majority.

In August the government scrapped nearly seven decades of autonomy in the Kashmir, the country’s only Muslim majority state. In November the Supreme Court handed a victory to Hindu groups over Muslim petitioners in a centuries old dispute over the ownership of a plot of land claimed to be the birth place of Hindu god Ram.

The top court had in December agreed to examine the legality of the citizenship law. Since then the protests, largely led by students and Muslim women, have spread across the South Asian nation, which has witnessed over 30 deaths in the police crackdown.