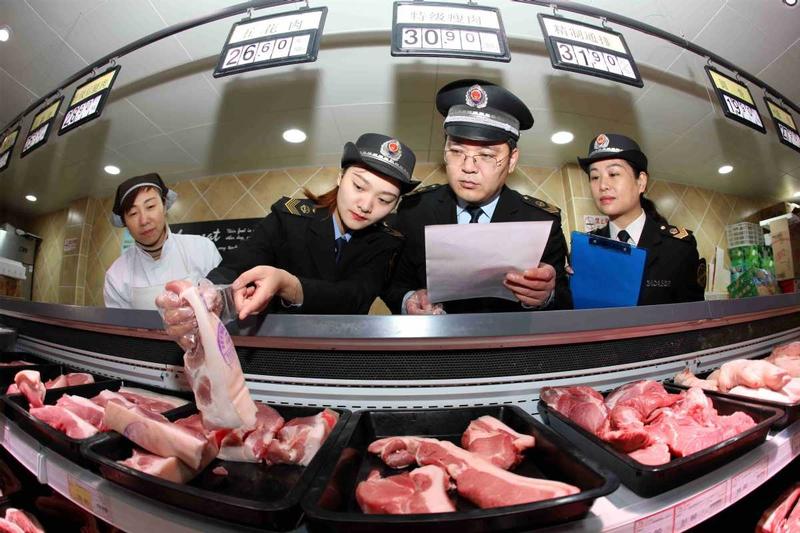 Inspectors check the quality of pork at a supermarket in Huaibei, Anhui province, on Tuesday. (LI XIN / CHINA DAILY)

Slaughterhouses across China have taken effective measures to prevent pigs infected with African swine fever from entering the market, the Ministry of Agriculture and Rural Affairs said on Wednesday.

Nationwide inspections organized by the ministry recently found all 4,578 pig slaughterhouses have been conducting mandatory self-inspections for the virus. Local agricultural authorities have also dispatched veterinarians to improve supervision, Wang Junxun, an official with the ministry's Animal Husbandry and Veterinary Department, said at a news conference.

The nationwide inspection, aimed at ensuring the quality and safety of pork on the market ahead of this month's Spring Festival holiday, concluded on Friday

The nationwide inspection, aimed at ensuring the quality and safety of pork on the market ahead of this month's Spring Festival holiday, concluded on Friday.

Pork production in China has been seriously affected by African swine fever outbreaks over the past year. The virus is fatal to pigs, but there is no evidence it can be transmitted to humans. The ministry has banned the sale of sick pigs to ensure food safety and quality.

Pork is the primary meat consumed in China, which produces half of the world's total.

Tang Ke, head of market and economic information at the ministry, said hog production in China started rebounding in October.

Ministry figures show the number of hogs entering the domestic market in December was up 14 percent month-on-month. That meant a 17 percent increase in pork production compared with the previous month, as the average weight of hogs slaughtered also increased.

Meanwhile, China imported 79 million metric tons of soybeans between January and November, down 4 percent year-on-year. However, more soybeans are expected to be imported this year, Tang said, meeting domestic demand for a main source of pig feed as pork production recovers.

Wang said the monitoring of slaughterhouses across China had also shown that the amount of pigs killed had increased for 10 weeks. More than 700,000 tons of frozen pork in stock had also hit the markets.

The supply of pork around the Spring Festival holiday is expected to meet demand, he said.

Wang said the ministry will work with related departments to intensify law enforcement efforts during the seven-day holiday to ensure the quality and safety of pork.