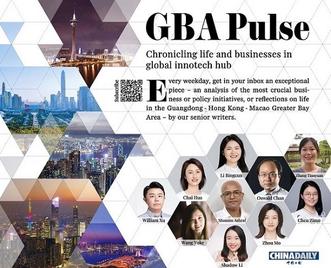 Once upon a time, when I was still in primary school, some relatives visited us in the hot, dusty country town where we lived, about 200 kilometers north of Melbourne, where they also lived. It was shortly before Christmas. My kind, visiting auntie took me aside and gave me a Christmas card. I had never received a personal Christmas card before, so this was already a special day. I was encouraged to open it and when I did, inside there was a rather crisp, 10 shilling note ($0.62). It was a delightful and unique surprise. I had seen such notes before, of course, but I had never actually possessed one myself.

The memory of this gift remains as vivid as ever. And it came to mind again recently as I prepared a red packet to give, on a special day, to someone close in Hong Kong. That got me thinking about what an uncommonly fine cultural creation the unassuming red envelope has turned out to be.

It is common to speak of the four great inventions China has given to the world: the compass, gunpowder, papermaking and printing. Their importance — and Chinese origins — are recognized these days with their own, detailed multipage Wikipedia entry.

Many in the West, with much bestriding, imperial and colonial history still shaping their worldview, surely think that these originations must have emerged first within European civilization. Although this is not the case, it was in the West that these inventions were radically developed and exploited for good and grim purposes.

After the fall of the Western Roman Empire, by 476 AD, Europe emerged as a huge zone of often antagonistic feudal kingdoms and principalities. By the 14th century, as the Renaissance began, Europe emerged from what became known as the Dark Ages. Over the next several centuries, came the Reformation (vehemently splitting the previously dominant Catholic church asunder); the Enlightenment; and the Age of Exploration and Imperial colonization, which, in turn, fed the extraordinary Industrial Revolution.

All forms of gift-giving lend themselves to being abused to assist graft and corruption, of course

Latin, the single binding written language once maintained by the Catholic Church, steadily fell away. The demand for paper and printing, to put the many different spoken European languages into affordable written form, was immense. Warfare was already a constant part of life in Europe and the Reformation intensified this terribly. Little wonder that the deadly uses of gunpowder were developed so effectively in Europe. And these breakthroughs, coupled with conspicuous advances in oceangoing navigation (using improved versions of the compass) opened the door to European, global imperialism, which, in turn, massively advanced the supply of resources consumed in the Industrial Revolution.

The Chinese imperial system, with its vast agricultural-based economy, was, over the same period, comparatively far more stable and, in terms of catering to a very large population, measurably less destructive. Moreover, it had established a single, standardized written language over 2,000 years ago, which it retains to this day, combined with highly advanced, but essentially secular, Confucian, ethical and governance systems. This was the civilization that produced these four great inventions but which also never developed their potential in the way that European civilization did.

But can one seriously speak of the red envelope as a “fifth great invention”? Although the answer surely is no, it is still a remarkably intelligent conception that has also emerged from within the largest, enduring civilization ever established.

Some historians trace the origins of giving “lucky money” back to the Han Dynasty, over 2,000 years ago. By the time of the Tang Dynasty, over 1,000 years ago, elders gave money to children during Lunar New Year to ward off evil spirits. By the time of the Ming and Qing Dynasties, coins (with holes) were strung together or placed in a colorful pouch for giving during Spring Festival. As the availability of coins with holes faded, the use of packets or pouches took over, typically red in color, symbolizing joy and good fortune.

Over time, the basic concept has been adopted and adapted in Cambodia, Korea, Japan and Vietnam, for example, as well as being widely applied throughout the global Chinese diaspora. A number of Muslim communities across Southeast Asia have also taken up the custom, typically using green envelopes because of that color’s traditional association with Islam.

Red packets are, of course, most closely associated with Lunar New Year gifts to children but they are also used on a wide range of other occasions, including birthdays and weddings and for students setting off to study overseas.

The essential human wisdom embodied in the red envelope conception is remarkably simple and effective. The envelope signifies the wish to give — but without any display of the amount — meaning that, prima facie, all gifts come with equal feeling. If family members who are not well-off give more than they can afford to emphasize their empathy, then this “over-giving” can be remedied with an aptly timed return red packet. Red packets are also a marvelous way to show appreciation to, for example, building security and cleaning staff, certain work colleagues and restaurant employees, usually at Lunar New Year — far more effectively than simply handing over HK$50 ($6.38) could ever manage.

In Western culture, giving cash as a gift for Christmas or a birthday is commonly regarded as indicating a certain lack of real identification or thoughtfulness, or that the giver is too lethargic to seek out an appropriate present. The red packet, centuries ago, cleverly resolved any such concerns. Moreover, it has greatly reduced the flow of unneeded presents within Chinese communities.

When you have been brought up within the “red packet system”, most people carry special, related memories, from childhood, into the rest of their lives. And they also, in time, grow to understand what a treat it is to give — as well as to receive — within this remarkably human arrangement.

All forms of gift-giving lend themselves to being abused to assist graft and corruption, of course. This plainly holds true for the red envelope tradition. Above all, however, this institution unceasingly plays a modest yet significant part in signaling the exceptionally high level of fundamental social understanding embodied within the Chinese way of seeing the world.

The author is an adjunct professor at the Faculty of Law, Hong Kong University.