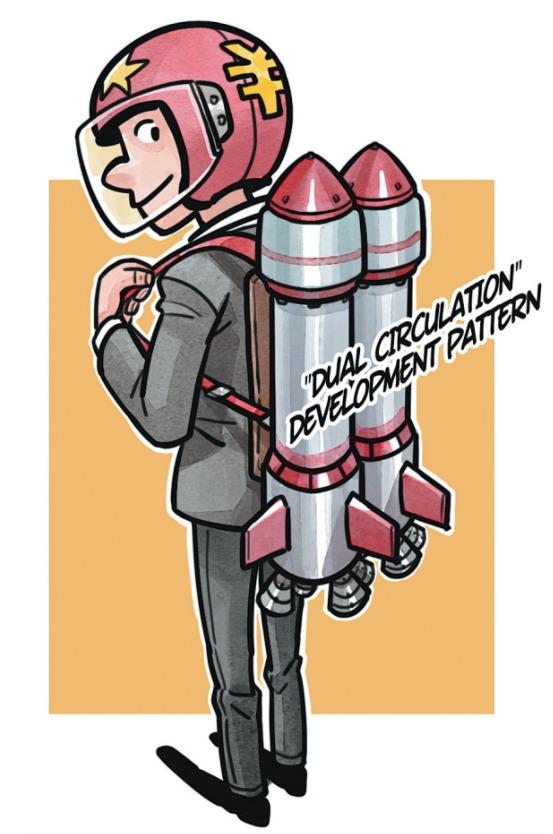 From June 1 to Sept 21, the Chinese yuan strengthened by more than 5 percent against the US dollar, from 7.1315 yuan per dollar to 6.7595 yuan. It was the strongest appreciation in a decade. During the same period, the US dollar index dropped at a pace much faster than the yuan's appreciation.

A stable and moderately rising RMB exchange rate is in line with China's new development pattern of "dual circulation", whereby domestic and foreign markets can boost each other, with the domestic market as the mainstay of China's growth. It is also in line with the nation's current and future development interests

A stable and moderately rising RMB exchange rate is in line with China's new development pattern of "dual circulation", whereby domestic and foreign markets can boost each other, with the domestic market as the mainstay of China's growth. It is also in line with the nation's current and future development interests.

However, it doesn't mean that the government will intervene to strengthen the currency. The RMB exchange rate will be determined by market forces, and influenced by other currencies, especially the US dollar index.

As for a country, its foreign exchange regime should serve the economic growth model, help to adjust prices of import and export goods, balance the development of internal and external sectors while reducing trade imbalances. Also, the regime should promote the currency's internationalization.

In China, a steady and balanced growth pattern is the key issue of its economy. The choice of exchange rate regime should support the changes of the economic growth mode.

Since the beginning of this year, the daily trading reference or the central parity of RMB exchange rate that was reported by the central bank every day, has become more market-oriented. Owing to the pandemic, in the first quarter, the surplus of trade in goods was only US$13.2 billion.

The logic behind the more market-oriented exchange rate reform lies in the change of China's economic growth mode. The exchange rate is no longer focused on the export-oriented growth mode as in the past, but more inclined to seek the balanced development of domestic trade sector and non-trade sectors.

The reform reflects the market demand for domestic and foreign currencies, which should also ensure that the exchange rate does not fluctuate significantly to lead to large capital flows.

Generally, the RMB exchange rate against the US dollar and that against a basket of currencies based on trade have remained balanced, although sometimes the rates showed slight deviations.

For some export-oriented enterprises, the "dual circulation" development pattern, with domestic market as the mainstay, requires that domestic goods should be more valuable than foreign goods.

A moderately rising RMB exchange rate will help stabilize foreign investment, which is also an important measure to stabilize the industrial chains. It can further integrate China's economy and finance into the global market, reducing the risk of "decoupling". Stabilizing foreign investment and industrial chains can form an interaction of internal and external circulation.

The stability of foreign investment will also increase exports, to offset the influence of currency appreciation. The long-term industrial chain stability and security is more important than maintaining the trade surplus.

A moderately rising RMB exchange rate will be conducive to lifting the value of domestic assets. As many economies took monetary easing to support growth, China has adopted a prudent monetary policy. Since the outbreak of the COVID-19 pandemic, China's monetary policy has been relatively restrained among the world's major economies, with the slowest expansion of the central bank's balance sheet.

A stronger RMB will attract more capital inflows, and the nation can effectively take advantage of global financial resources to participate in the domestic economic and financial development, and promote the opening-up of the capital market.

The current situation of the global economy and external financial environment also support a stable rising RMB exchange rate. China is one of the world's economies that has successfully controlled COVID-19 at an early stage, and it is expected to be the only one among the world's largest economies to maintain a positive growth this year.

Comparably, COVID-19 is still very serious overseas, suggesting very hard economic recovery. Economic fundamentals can determine that there is no basis for the RMB to depreciate in the immediate term as well as in the near term, unless the international financial market turns turbulent again and the US dollar strengthens remarkably.

In the global financial market, the relatively lower interest rates will stay for the long term. The global economic recovery is restrained by the impact of the pandemic and trade disputes.

In addition, the huge amount of government debt and further fiscal stimulus policies in developed economies require low interest rates to raise funds and implement the debt rolling program. At the same time, before the economic recovery, enterprises also need low interest rates for financing and to reduce the cost of funds.

Finally, from the perspective of interest rates between China and the US, the Sino-US interest rate spreads are large compared with the levels in history. Therefore, the external financial environment supports the RMB appreciation.

However, a steady appreciation of the currency doesn't mean a strong intervention of the exchange rate－it should be a market-oriented trend.

Wang Jinbin is a researcher at the National Academy of Development and Strategy, which is part of the Renmin University of China in Beijing.