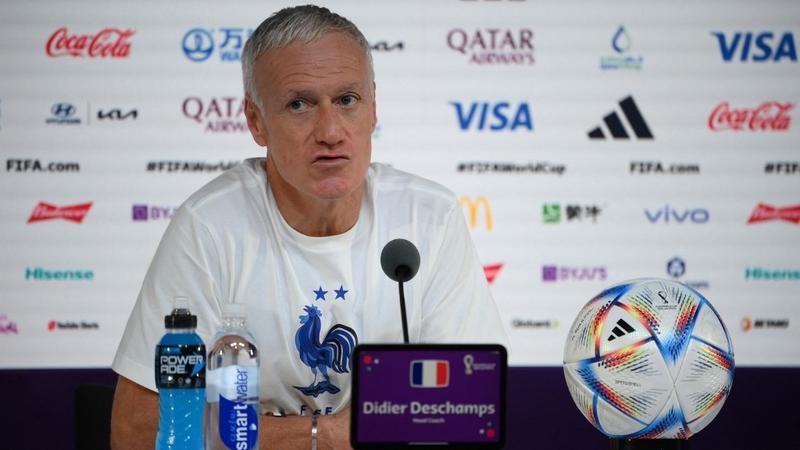 France's coach Didier Deschamps attends a press conference at the Qatar National Convention Center (QNCC) in Doha on December 9, 2022, on the eve of the Qatar 2022 World Cup quarter-final football match between England and France.(FRANCK FIFE / AFP)

AL RAYYAN — France will have to be on their toes when they face England in their World Cup quarter-final clash as their opponents have players capable of hurting them on the counter-attack and at set-pieces, coach Didier Deschamps said on Friday.

The teams have not met at a major tournament since they drew in the group stage of Euro 2012 but the focus has very much been on the game between two countries that share a sporting rivalry.

The spotlight has been on how forward Kylian Mbappe, the tournament's top scorer with five goals

Deschamps, who has won the World Cup with France as a player and coach, said he did not see many weaknesses in the England team but they did have some "slightly less strong points".

"Pace is often one of the keys - when you are quick then the opponents have less time to get organised. But you need more than just pace to score goals," Deschamps said ahead of Saturday's game at Al Bayt Stadium.

"You can stop a lot of things but it is very difficult to stop someone very quick, especially in transitions.

"England are very strong in transitions - more than half of their goals have come from quick counter-attacks. But they have other qualities too -- they have technical ability, the capacity to score goals and ability on set-pieces."

The spotlight has been on how forward Kylian Mbappe, the tournament's top scorer with five goals, will fare against the England defence, with Kyle Walker saying he would count on his experience of playing him in the past when they square up.

READ MORE: All eyes on Mbappe as France and England to face off at WCup

"I'm sure England will have prepared to face him but Kylian is in a position to make a difference," Deschamps said.

"Even in his last match he wasn't at his best, not in top form but still decisive (scoring twice in a 3-1 win against Poland). We have other players that can be dangerous as well."

France skipper and goalkeeper Hugo Lloris has spent the last decade playing in England with Tottenham Hotspur and the 35-year-old said he would be sharing what he has learned from playing in the Premier League with his team mates.

"Some of us play and train with the English players on a daily basis. If we can help our team mates with knowledge from playing with the clubs, we do," Lloris said.

"They (England) are good on set pieces, they're tall, they have players who can take good free kicks. We have to be very strong, but our attack has what it takes and can make it difficult for them."

France won the World Cup with a stellar run in Russia four years ago but Lloris said it was the England squad that has more tournament experience than the reigning champions.

"If we compare both sides, there were more English players here who were at the World Cup in Russia than France players," Lloris added.

"England reached the semi-finals at the last World Cup and were runners-up at the Euros, there's been a real progression. This team is ready to compete for trophies. They were unlucky at the last Euros, they were close, but they're here to win.

"In our side there are changes, there's a new generation of players ready to compete playing in the best clubs in Europe. It's a good mixture of experience and young players, we're getting stronger step by step."