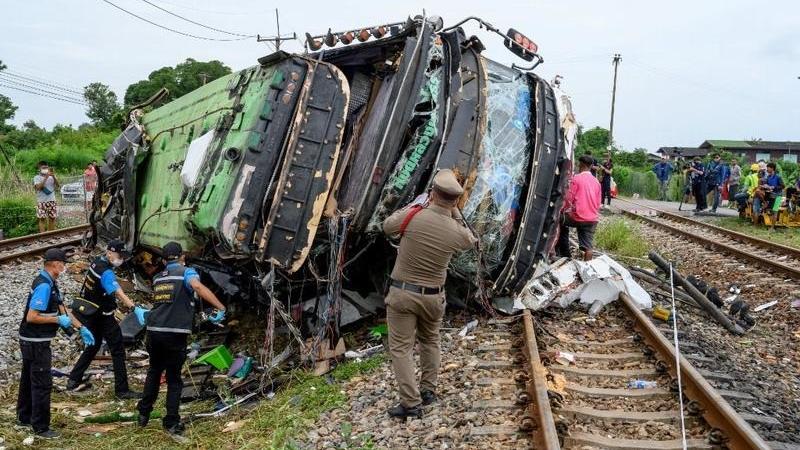 Investigators work by the wreckage of an overturned bus involved in a deadly collision with a train next to Khlong Kwaeng Klan railway station in Chachoengsao province, east of the Thai capital Bangkok, on October 11, 2020. (MLADEN ANTONOV / AFP)

BANGKOK — An explosion at a railway in Thailand's southern Songkhla province killed at least three people and injured four others early Tuesday, according to the State Railway of Thailand (SRT).

Local officials said the incident occurred at approximately 6:24 am local time. The explosion hit a section of the railway where workers were doing repair, with three SRT officials killed and four others suffering minor injuries.

The section was only 200 meters away from the point where another explosion occurred on Saturday, which derailed a freight train.

According to the Songkhla Provincial Public Relations Office, Provincial Governor Jessada Jitrat visited the scene to assess the situation in order to prevent the reoccurrence of such attacks.

It hasn't been confirmed whether the bomb was placed in the previous incident or has been intentionally planted at the same location subsequently, according to local authorities.

Meanwhile, the bomb disposal squad and security officials have launched investigations and interviews of people involved in the second blast.

According to local media, the attack on Saturday was believed to be carried out by the southern insurgents. Separatist movements and organized crimes have occurred periodically in southern Thailand for decades.