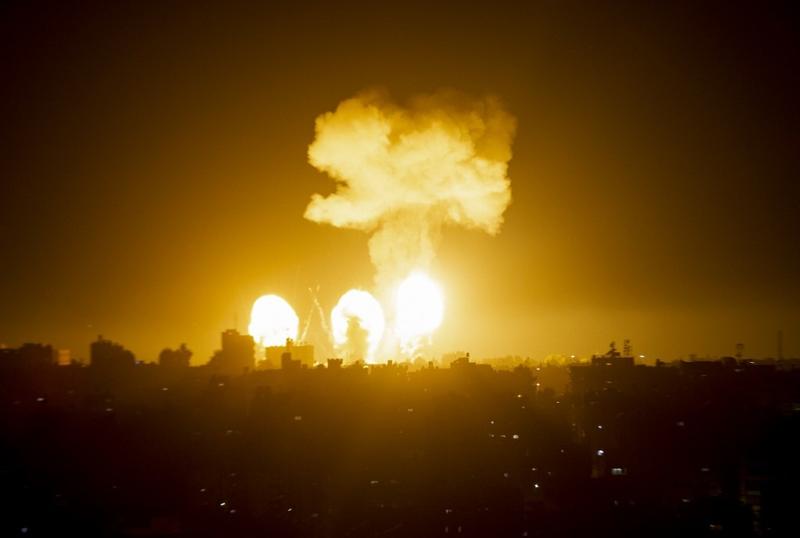 A ball of fire and a plume of smoke rise above buildings in south of City Strip as Israeli warplanes target the Palestinian enclave, early on Dec 4, 2022. (STR / AFP)

GAZA - Israeli fighter jets on Sunday carried out a series of airstrikes on facilities belonging to militant groups in the Gaza Strip in response to rockets fired from the coastal enclave, Palestinian eyewitnesses said.

The witnesses told Xinhua that Israeli army drones and fighter jets were heard buzzing in the air and several explosions were heard west of the southern Gaza Strip cities of Khan Younis and Rafah.

Palestinian medical sources said that no injuries were reported during the strikes mainly targeting the Islamic Resistance Movement (Hamas) and the Palestinian Islamic Jihad (PIJ).

The airstrikes were an Israeli response to the earlier firing of three rockets at southern Israel, said an Israeli army spokesman. No group has claimed responsibility for firing the rockets.

Militants in the Hamas-ruled coastal enclave also fired at least five rockets at southern Israeli communities close to the borders with the Gaza Strip during the airstrikes, sources close to Hamas security told Xinhua, adding that an anti-craft missile was fired at Israeli fighter jets by Hamas militants.

Media outlets in Gaza quoted an Egyptian source as saying that Egyptian intelligence is in intensive contact with the Palestinian factions to avoid an escalation in Gaza.