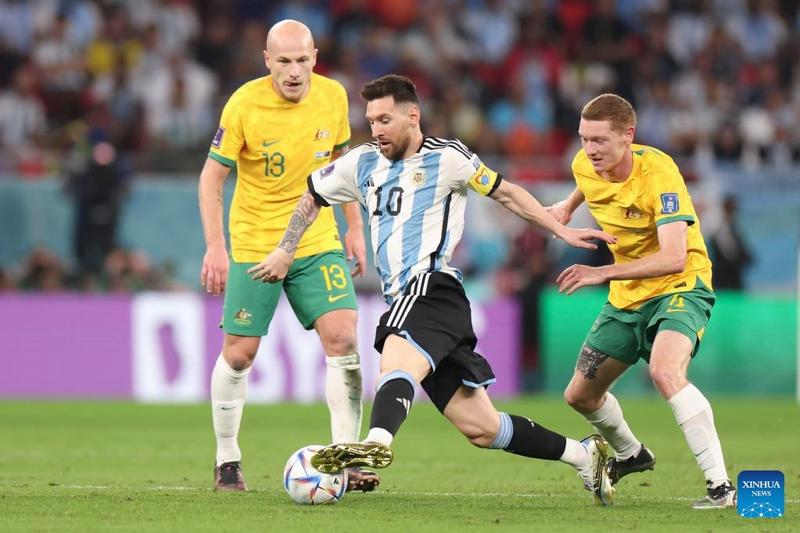 Lionel Messi (center) of Argentina competes during the Round of 16 match between Argentina and Australia at the 2022 FIFA World Cup at Ahmad Bin Ali Stadium in Al Rayyan, Qatar, Dec 3, 2022. (CAO CAN / XINHUA)

DOHA – Lionel Messi celebrated the 1,000th game of his career with the opening goal as Argentina qualified for a World Cup quarterfinal against the Netherlands, who also won on Saturday.

Messi broke the deadlock in the 35th minute in his side's 2-1 win over Australia which was much closer than expected, with a typical left-footed shot that had Australian keeper Mathew Ryan slightly unsighted. It was his ninth goal in the World Cup, but the first in the knockout stage.

Australian keeper Mathew Ryan had a moment he will want to forget in the 57th minute, when he was dispossessed from behind by Argentina striker Julian Alvarez, who hooked the ball into the empty net

Ryan had a moment he will want to forget in the 57th minute, when he was dispossessed from behind by Argentina striker Julian Alvarez, who hooked the ball into the empty net.

Those two moments undid a solid hour's work from the Socceroos, but they made a massive effort to stay in the game as Argentina looked to pass the ball and kill off any chance of a reaction.

Craig Goodwin gave Australia a lifeline when his shot was deflected in off Enzo Fernandez in the 77th minute, and Aziz Behich almost leveled after an incredible run four minutes later.

That set up an entertaining finish with both sides attacking and defending frantically, and Argentina keeper Emiliano Martinez had to make a last gasp save to deny Awer Mabil from a narrow angle.

The Netherlands had to withstand early pressure from the USA, who were again hard-working and energetic, but the Dutch had the intelligence to get behind the American defense by using wing-backs Daley Blind and Denzel Dumfries.

Player of the Match Dumfries served up the opening goal for Memphis Depay in the 10th minute as the Netherlands used the full width of the pitch. He was the supplier again as Blind doubled their lead on the stroke of halftime with an almost identikit goal.

The USA worked hard to get back into the game after the break, but had few clear chances until substitute Haji Wright flicked the ball home in the 76th minute. 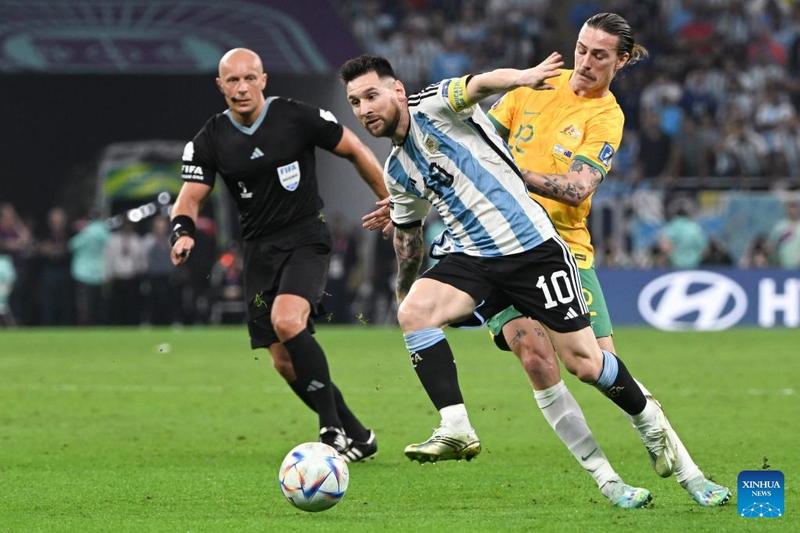 Lionel Messi (center) of Argentina vies with Jackson Irvine of Australia during their Round of 16 match at the 2022 FIFA World Cup at Ahmad Bin Ali Stadium in Al Rayyan, Qatar, Dec 3, 2022. (LI GA / XINHUA)

Dumfries ended any hopes of a comeback five minutes later with a volley as he arrived unmarked for Blind's pinpoint cross.

Speaking after the match, Dutch coach Louis Van Gaal said his side could win the World Cup.