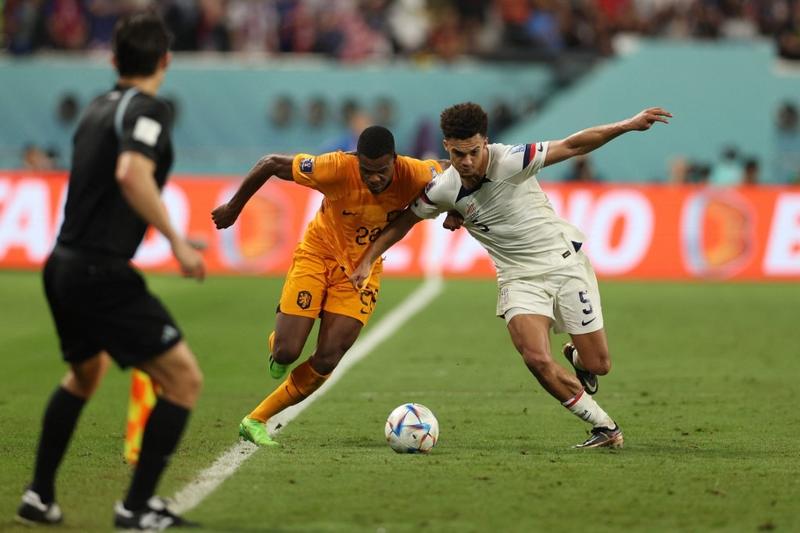 Netherlands' defender Denzel Dumfries (left) fights for the ball with USA's defender Antonee Robinson during the Qatar 2022 World Cup round of 16 football match between the Netherlands and USA at Khalifa International Stadium in Doha on Dec 3, 2022. (ADRIAN DENNIS / AFP)

DOHA – The Netherlands' full backs proved the difference as veteran Daley Blind and hard-running Denzel Dumfries turned in decisive performances to help secure a 3-1 win over the United States in Saturday's opening match of the World Cup knockout stages.

Dumfries netted and had two assists while Blind scored too as the Dutch saw off a brief spell of US resistance to book a quarter-final with Argentina or Australia, who play later.

Striker Memphis Depay got the first goal as the Netherlands advanced to a seventh World Cup quarter-final.

A comfortable 2-0 halftime lead was halved in the 76th minute as the Americans finally made a breakthrough, even if scorer Haji Wright seemed to know little about the ball hitting his heel and then looping into the corner of the net.

However, any hopes they had of staging a comeback were ended five minutes later as Dumfries sealed his man-of-the-match performance by ghosting in at the back post and side-footing a volley into the net to restore the two-goal advantage.

The Dutch deserved the win but again there will be questions about whether they are serious World Cup contenders – something coach Louis van Gaal keeps insisting they are, although he was quick to admit Saturday's showing could have been a lot better.

“We also lost a lot of ball possession, and it is not acceptable at a World Cup, especially if you are playing a top-level team,” he said.

Van Gaal's side did, though, offer some glimpses of classy potential, no more so than with a series of 20 passes that set up their 10th minute opener – finished off by Depay smartly hitting home a cut-back pass from Dumfries. 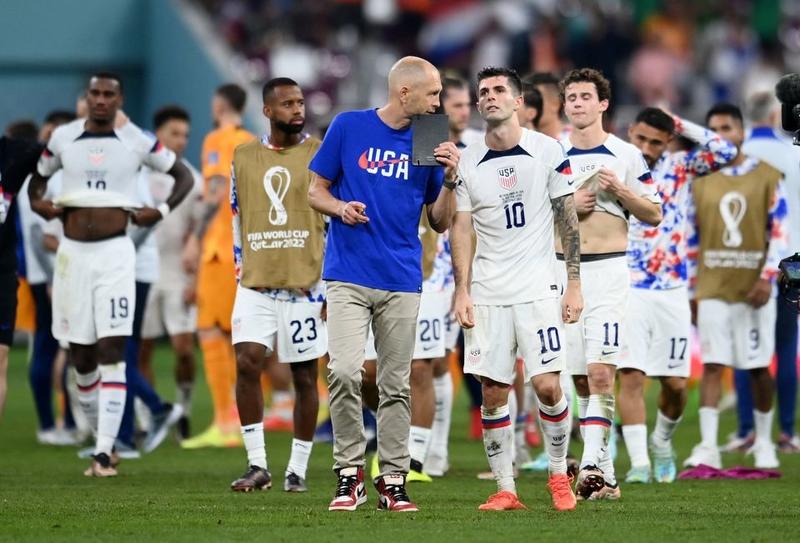 US coach Gregg Berhalter and Christian Pulisic of the US look dejected after the match as United States are eliminated from the World Cup. (ANNEGRET HILSE / REUTERS)

The second Dutch goal, on the stroke of halftime, was almost identical. Blind also delayed his entry into the area and Dumfries found him with another perfect pass from the right, allowing Blind to score for the third time in 98 internationals.

“They were fantastic goals, they had a beauty about them but they were also team goals,” said Van Gaal.

The American defence was sucker-punched on both occasions although in between their team had chances, notably Christian Pulisic in the third minute when goalkeeper Andries Noppert got his lanky leg in the way to block the shot.

“We talked about the game being about moments," said US coach Gregg Berhalter, whose country co-hosts the 2026 World Cup. "We were on top and then all of a sudden we were 2-0 down. That's what happens at this level and we’ve got to learn from it."

They also had two second-half efforts cleared off the line but were always vulnerable to the counter-attack where the Dutch could have made much more of numerous opportunities to add to their tally.

In the end, though, they added only one more goal – but at a vital juncture, just as the crowd at the Khalifa International Stadium was beginning to offer the Americans encouragement.

Blind was criticized as the Dutch dithered their way through Group A but reminded everyone of his quality with a deft chip over the defense to allow Dumfries to kill off the contest. 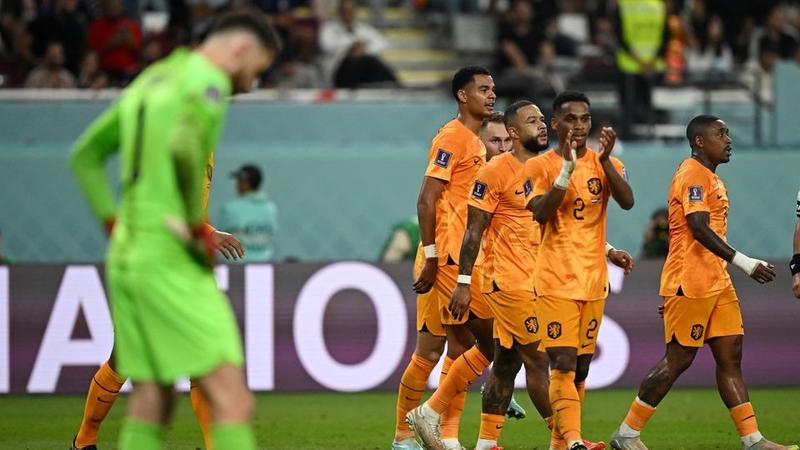 "If the left wing back gets a cross to the right wing back and then the other way round, and they both score, that’s fantastic,” enthused Van Gaal.

"This is a result that gives us incredible confidence."