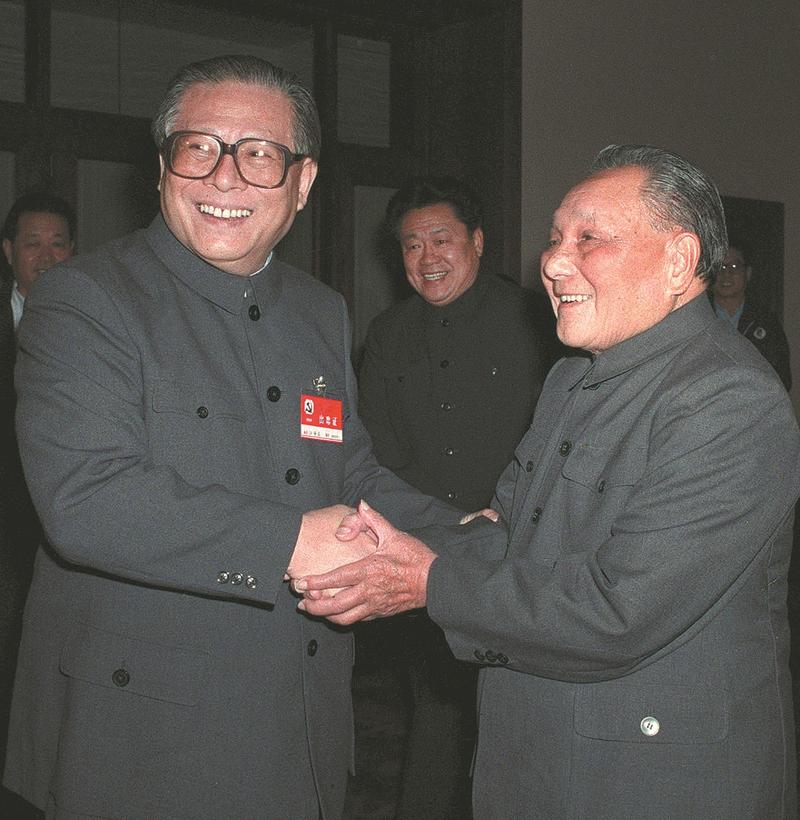 Jiang Zemin is greeted by Deng Xiaoping during the fifth plenary session of the 13th Communist Party of China Central Committee, which was held in Beijing from Nov 6 to 9, 1989. (PHOTO / XINHUA)

BEIJING – Jiang Zemin was an outstanding leader whose enormous prestige was acknowledged by the whole Communist Party of China, the entire military and the Chinese people of all ethnic groups.

He passed away on Wednesday due to leukemia and multiple organ failure in Shanghai at the age of 96.

Jiang was a great Marxist and a great proletarian revolutionary, statesman, military strategist and diplomat. He was a long-tested communist fighter and an outstanding leader of the great cause of socialism with Chinese characteristics.

He was also the core of the third generation of the Party's central collective leadership and the principal founder of the Theory of Three Represents, which defines the role of the Party and stresses that the Party must always represent the requirements for developing China's advanced productive forces, the orientation of China's advanced culture and the fundamental interests of the overwhelming majority of the Chinese people. 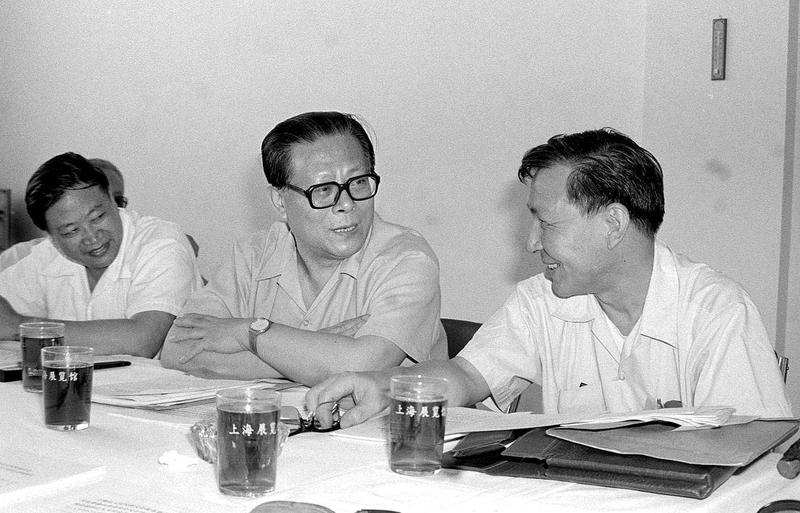 Jiang Zemin talks with colleagues during the fourth session of the eighth Shanghai Municipal People's Congress in 1985. (PHOTO / XINHUA) 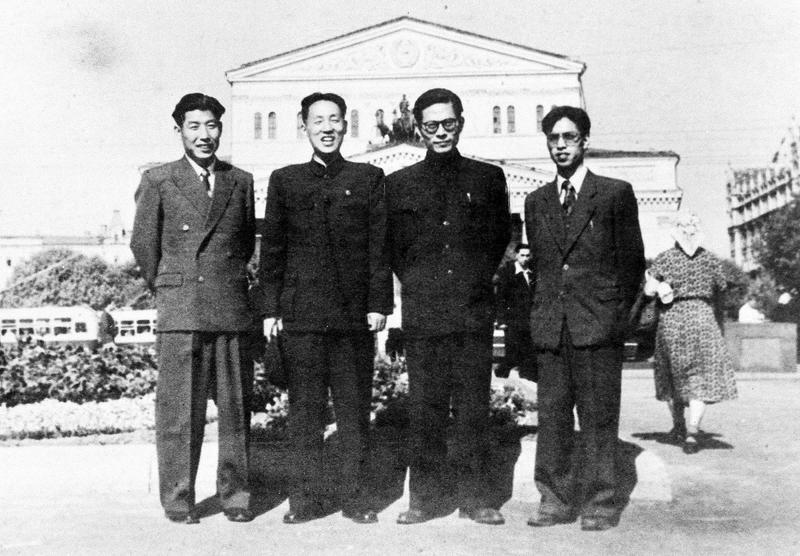 Jiang Zemin (second from right) lines up with colleagues at Stalin Automobile Factory in Moscow. He worked there as an intern in 1955 and 1956. (PHOTO / XINHUA)

He was elected as the general secretary of the CPC Central Committee at the fourth plenary session of the 13th CPC Central Committee in 1989, when China was confronted with the complexity of the domestic and international situations and the grave challenges posed by the serious twists and turns world socialism had experienced.

In the following years, Jiang led the Party's central collective leadership — firmly relying on the whole Party, the entire military and the Chinese people of all ethnic groups — in safeguarding the great cause of socialism with Chinese characteristics and successfully advancing that cause into the 21st century. 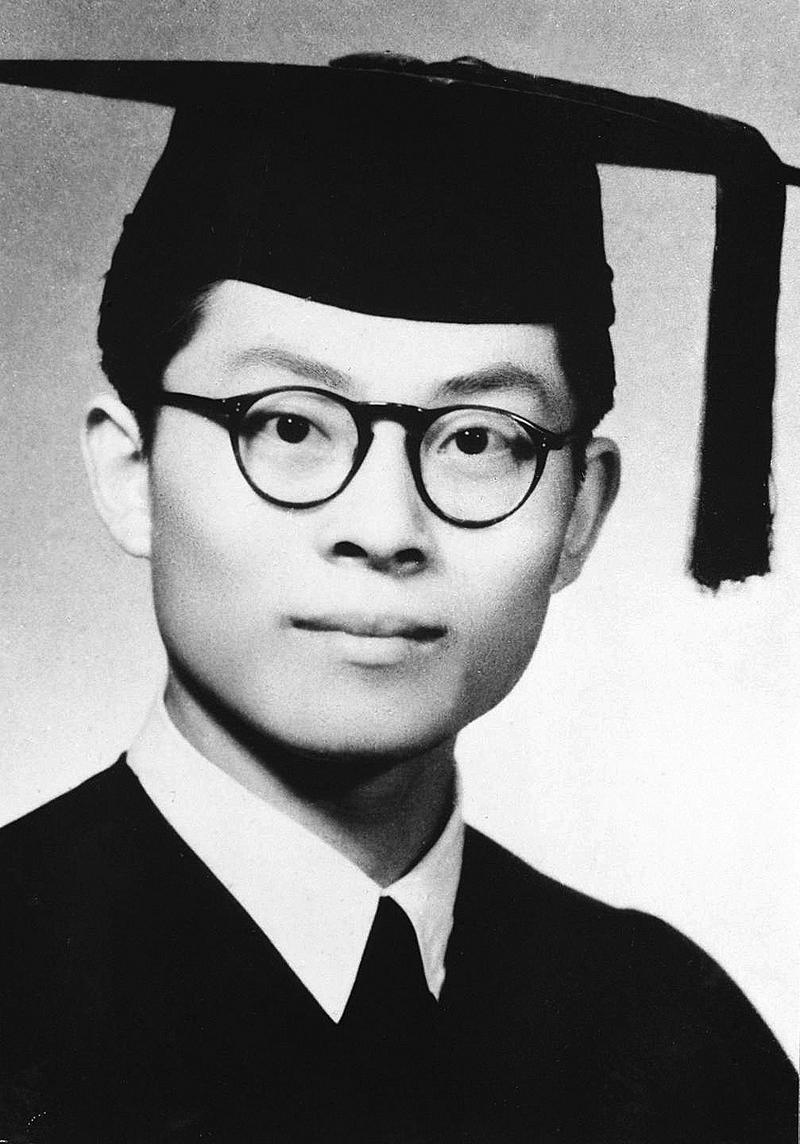 He made indelible achievements and won the heartfelt love of the whole Party, the entire military and the Chinese people of all ethnic groups, as well as the wide acclaim of the international community.

Born into a family of patriotic intellectuals in the Yangzhou, Jiangsu province, on Aug 17, 1926, Jiang was inspired by the thoughts of patriotism and democratic revolution from his childhood. He graduated from Shanghai Jiao Tong University in 1947 with a bachelor's degree in electrical engineering. 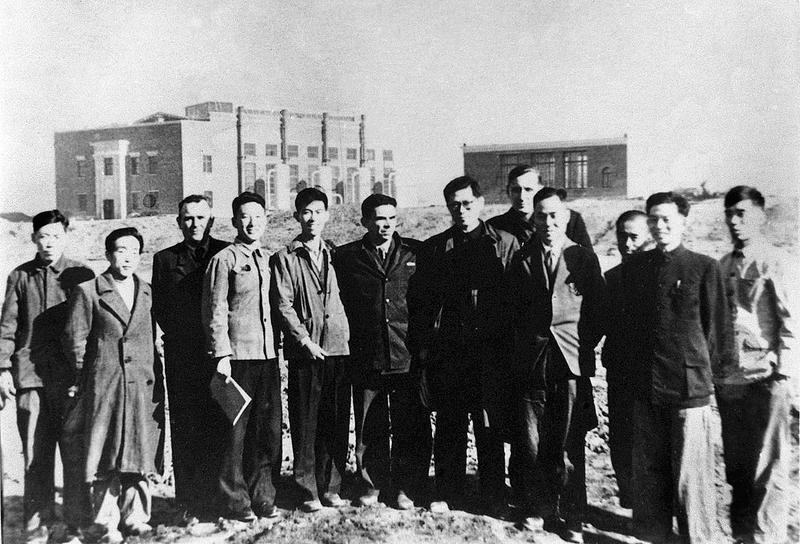 Jiang Zemin (seventh from left) is seen alongside colleagues and Soviet experts in 1956 at the First Automotive Works in Changchun, in Northeast China's Jilin province. The Soviet experts helped in the construction of the factory. (PHOTO / XINHUA) 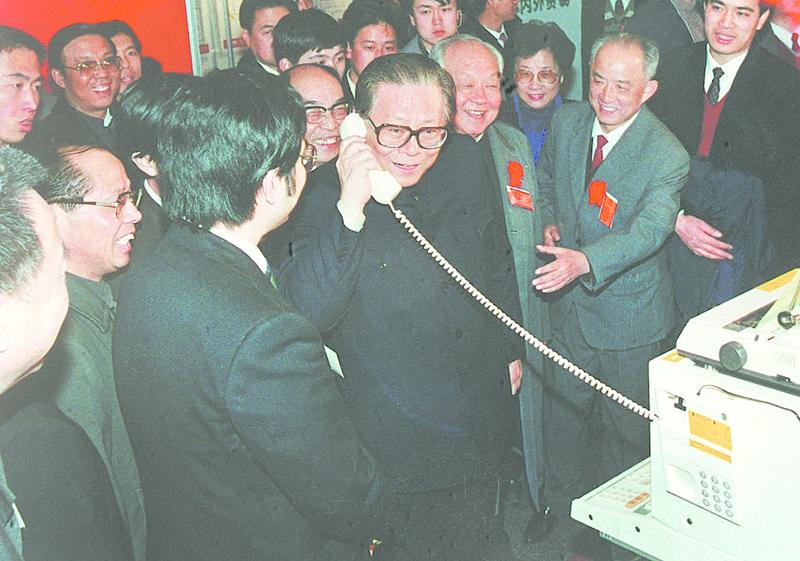 Jiang Zemin tries out an international call to greet workers while visiting the Beijing Exhibition Hall in May 1984. New electronics products were being showcased at the event. (PHOTO / XINHUA)

He joined the CPC in April 1946. After the People's Republic of China was founded in 1949, he worked in several factories as an engineer before receiving further technical training in the former Soviet Union in 1955. He subsequently led technological research institutes in various parts of China.

When political turbulence took place in Beijing in 1989, Jiang firmly upheld and implemented the decisions of the CPC Central Committee about opposing riots, safeguarding the socialist State power and protecting the people's fundamental interests. Relying on the CPC members, cadres and the public, he managed to uphold stability in Shanghai. 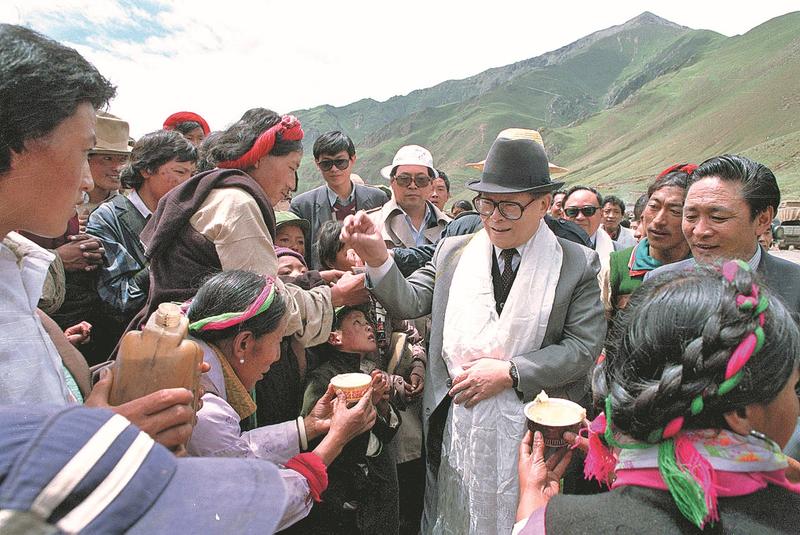 Jiang celebrates Ongkor Festival, which is for a good harvest, with people of the Tibetan ethnic group in July 1990. (PHOTO / XINHUA) 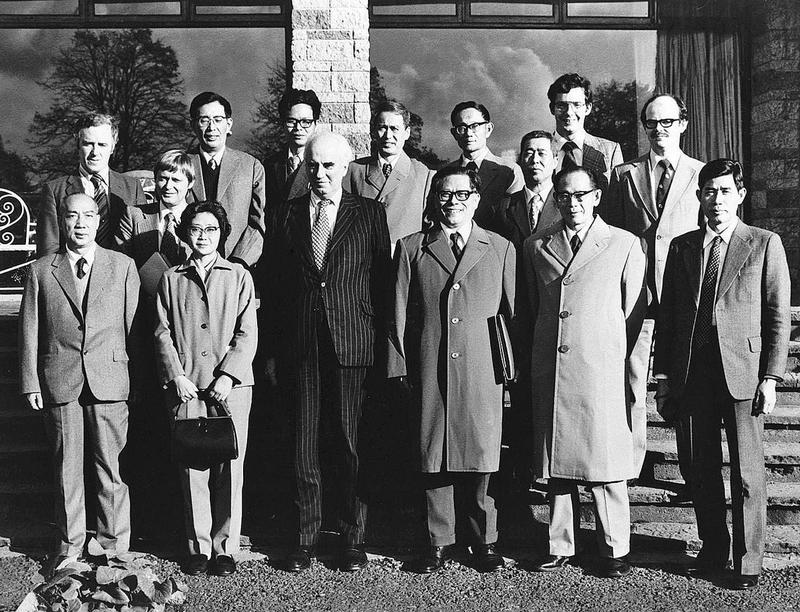 Jiang Zemin (front row, third from right) poses for a photograph with colleagues and local officials during a visit to a development zone in Shannon, Ireland, in October 1980. (PHOTO / XINHUA)

During the 13 years from 1989 to 2002, when he worked as the Party and State leader to build socialism with Chinese characteristics by uniting the whole Party and the Chinese people of all ethnic groups, he adhered to the basic theories, principles and guidelines of the Party, further developed the theories about socialism and the Party and established the Theory of Three Represents.

He put forward a series of views about the development path of socialism with Chinese characteristics and had an in-depth understanding about how to advance socialist construction in the fields of economy, politics, culture, national defense, diplomacy and strengthening the Party as well as about national reunification.

Jiang proposed that it is essential for the Party to give top priority to development in governing and rejuvenating the country. It is a principle that must be upheld for the long term to deepen reform, expand opening-up, promote development and maintain stability, according to Jiang. 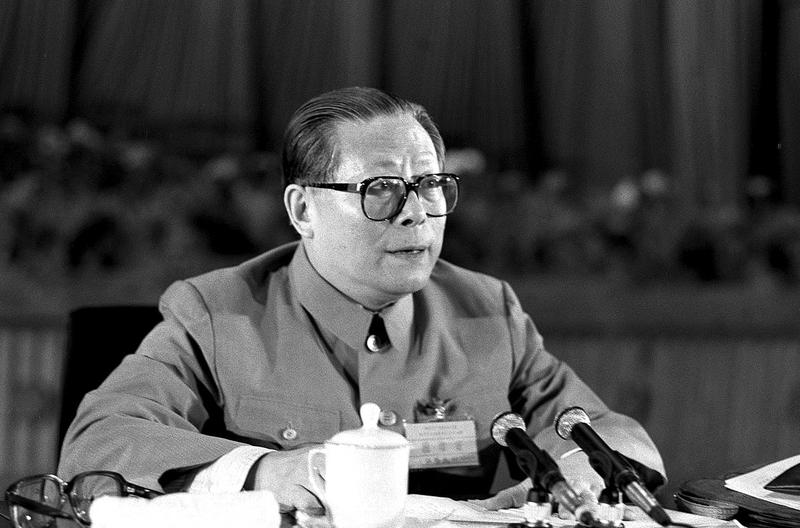 In the 1990s, with the development of economic globalization, Jiang attached greater importance to opening-up to the rest of the world, highlighting the need to strengthen exchanges and cooperation with countries from around the world and improve policies to raise the quality and level of opening-up. In December 2001, China joined the World Trade Organization, which marked a new phase for the nation in its opening-up.

Jiang stressed that in the course of China's opening-up, efforts must be made to safeguard national sovereignty and socioeconomic security, and to prevent and defuse the international risks and properly handle the relationship between expanding opening-up and adhering to self-reliance.

Regarding the construction of socialist economy, Jiang stressed that the fundamental purpose of economic development is to raise the living standards and quality of people's lives across the country, saying employment matters to the people's well-being.

While developing the socialist democratic politics, Jiang said that the underlying principle is to preserve the organic unity of Party leadership, the running of the country by the people and law-based governance.

ALSO READ: Jiang remembered as 'an outstanding leader' in the SARs

As chairman of the Central Military Commission, Jiang proposed that strengthening national defense is a strategic task for the country to realize modernization, and it is also an important guarantee for the country to safeguard national security and reunification as well as building a moderately prosperous society. 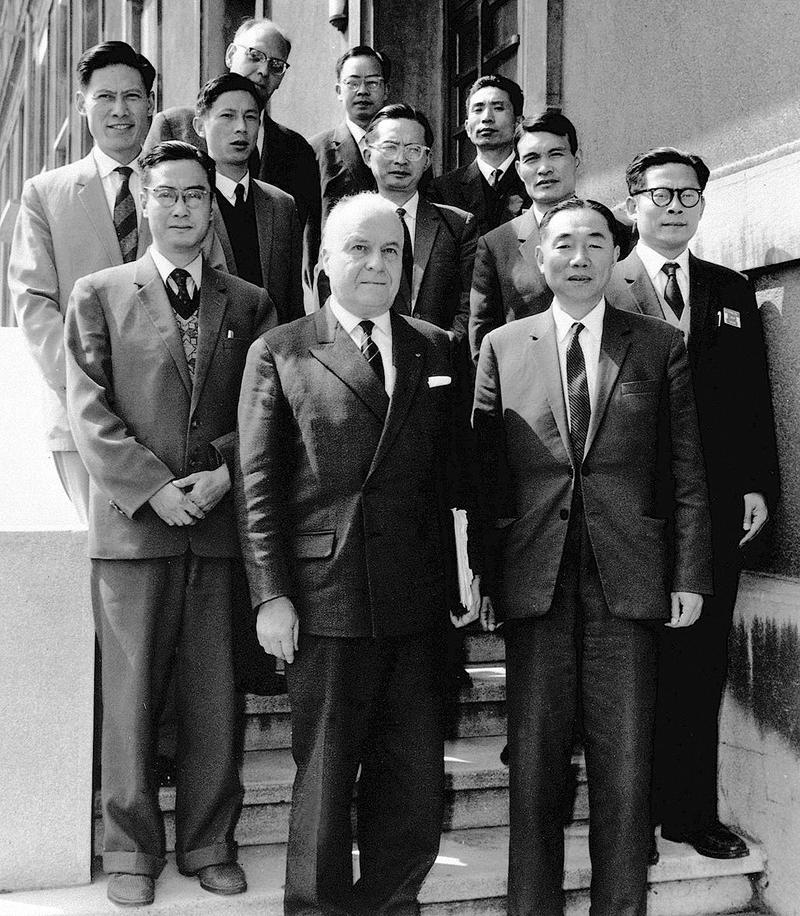 Jiang Zemin (first from right, second row) poses for a photograph in June 1964 with delegates on the sidelines of a meeting of the International Electrotechnical Commission in Aix-les-Bains, France. (PHOTO / XINHUA) 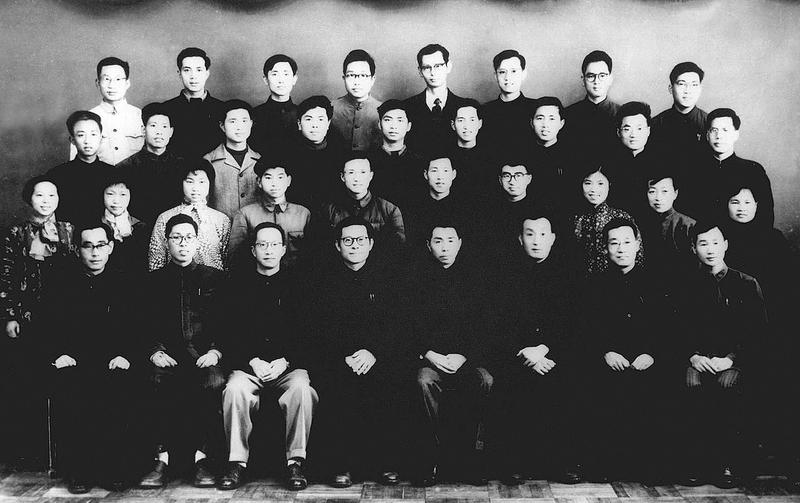 Jiang Zemin (front row, fifth from right) poses for a group photograph in March 1963 with members of a leading group of technicians in charge of work on the design of small, three-phase, asynchronous motors. (PHOTO / XINHUA)

Jiang pointed out that completing the national reunification matters to the fundamental interests of the Chinese nation, and represents the common aspirations of all the Chinese people, including compatriots from Taiwan, Hong Kong and Macao as well as overseas Chinese. Under his leadership, Hong Kong returned to the motherland on July 1, 1997, and Macao returned to the motherland on Dec 20, 1999.

Amid profound changes of the international situation, Jiang put forward a series of concepts about China's diplomacy. He stressed that peace and development remain the theme of the times. No matter how the international landscape evolves, China must stay committed to the independent foreign policy of peace and the purpose of China's diplomacy is to uphold world peace and promote common development, he said.

As general secretary of the CPC Central Committee, Jiang emphasized the importance of strengthening the Party. He called for exercising rigorous governance over the Party, improving governing capacity, and opposing and preventing corruption. 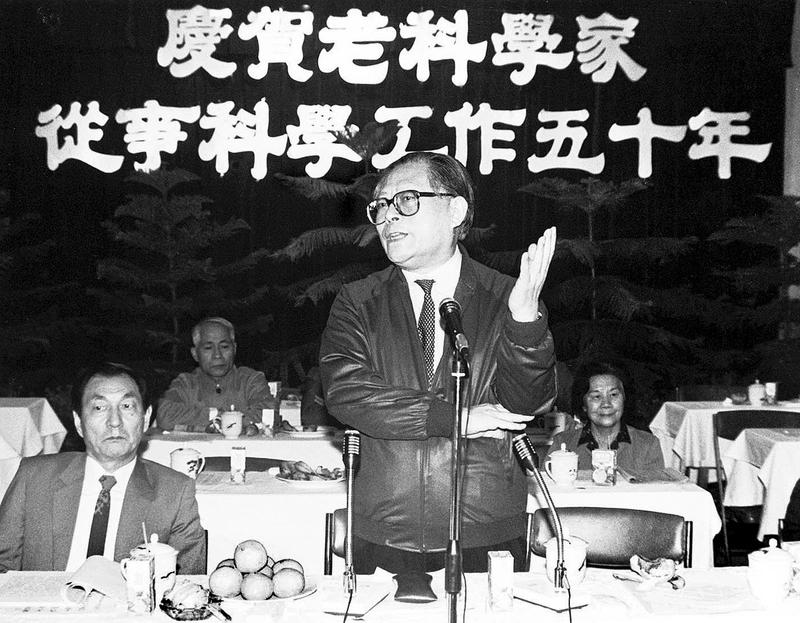 During the 13 years Jiang led the CPC's third generation of central collective leadership, the nation had dealt with a series of emergencies that matter to the sovereignty and national security and prevailed over the difficulties and risks in the political and economic fields and in nature, ensuring the reform, opening-up and socialist construction march forward in the right direction. Under his leadership, the nation successfully tided over the Asian financial crisis in 1997 and won the battle against the severe flooding disaster in 1998.