By Shi Baoyin in Zhengzhou and Li Lei 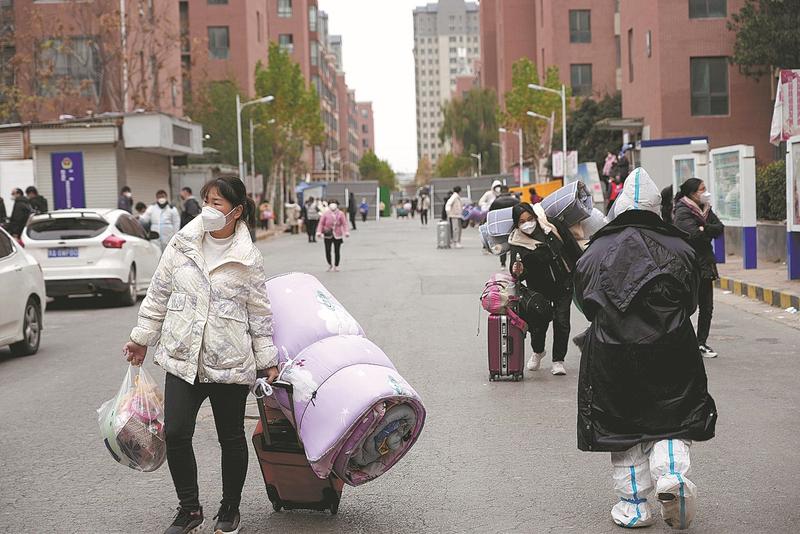 Some 10,000 workers have returned to the world's largest Apple iPhone assembly plant in Zhengzhou, Henan province since Monday, and more are on their way, Foxconn said on Thursday.

The Foxconn plant has sent coaches to return them to employee dormitories in an arrangement known as "point-to-point transportation" aimed at avoiding infection during the journey. Upon arrival, workers need to go through a five-day health monitoring period before starting work, the plant said in a written response to China Daily.

The company has rolled out incentives to encourage employees to work in a closed-loop environment, offered psychological counseling and worked to ensure that warm clothes, food and other necessities are in abundant supply, it said.

"Under the guidance of epidemic control experts, a series of prevention and control measures have been taken, with a focus on balancing epidemic prevention and our production," the statement said.

As many as 300,000 workers work the assembly lines during the peak production season at the sprawling Foxconn plant in the Zhengzhou Airport Economy Zone, it has been reported.

The return of workers forms part of a broader effort by local authorities to ramp up production after a spike in COVID-19 cases in the provincial capital prompted a mass exodus of its employees in late October.

Many of those who returned this time live in Zhengzhou and surrounding areas, said a management official surnamed Li.

"We have arranged air-conditioned, newly painted dorms with new bed covers," he said, adding they have also disinfected the rooms and prepared N95 protective masks.

One of the returnees, who only gave her surname Guo, said she came back lured by the generous pay, and is currently undergoing health monitoring in her dormitory and expects to return to her post next week.

"The dorm and canteen seemed nice," said Guo, 25, who left the plant in late October and walked for more than a day before reaching her hometown Jiaozuo, which is 90 kilometers northwest of Zhengzhou.

To ease the shortage of workers, the plant also issued a notice asking employees to recommend experienced friends.

According to a recruitment advertisement posted online, new workers are entitled to a one-time compensation, such as the production stabilization and closed-loop management fees, which adds up to 6,500 yuan ($920).

Those who successfully recommended workers will be given 1,000 yuan as a reward, it said.

The effort to resume production has overlapped with the city's decision to end a five-day lockdown starting midnight Tuesday. The "mobility management" rules were aimed to halt the spread of an Omicron-fueled surge of cases in the city of 12.7 million. Zhengzhou Airport Economy Zone had made its own COVID-19 control rules and was not subject to the mobility management policy.

Zhengzhou reported 71 local confirmed cases and 319 asymptomatic carriers in the 24 hours ending midnight on Wednesday, according to the National Health Commission, a sharp drop compared with earlier last month.

However, nonessential travel across Zhengzhou's districts or departure from the city are still discouraged, according to a public letter addressed to Zhengzhou residents on Tuesday.

Visitors from out of town require negative test results from within 48 hours, and those from outside the province must test upon arrival in Zhengzhou and daily for another two days during their stay, it said.

The rules freezing mobility in Zhengzhou, a major agricultural area, have also created headaches for local farmers, as logistics issues have prevented large amounts of vegetables and other farm produce from reaching urban markets.

Chen Shiju, general manager of Xinkaiyuan, a cold-chain logistics company in Zhengzhou, said the mass shutdown of restaurants has also contributed to the problem.

The emergency has prompted the Ministry of Agriculture and Rural Affairs to launch a sales promotion program that pairs major farm produce markets nationwide with vegetable-growing townships in Zhengzhou.

Data provided by the ministry said 4,677 metric tons of vegetables were sold between Nov 22 and Monday through the partnership. Top buyers include markets in Shangqiu, Henan province, and those in Beijing, and Jiangsu, Hubei and Shaanxi provinces.

Qi Xin contributed to this story.