By Cao Desheng in Beijing, Xu Wei in Samarkand, Uzbekistan, Xu Weiwei in Hong Kong and Liu Hongjie in Nairobi 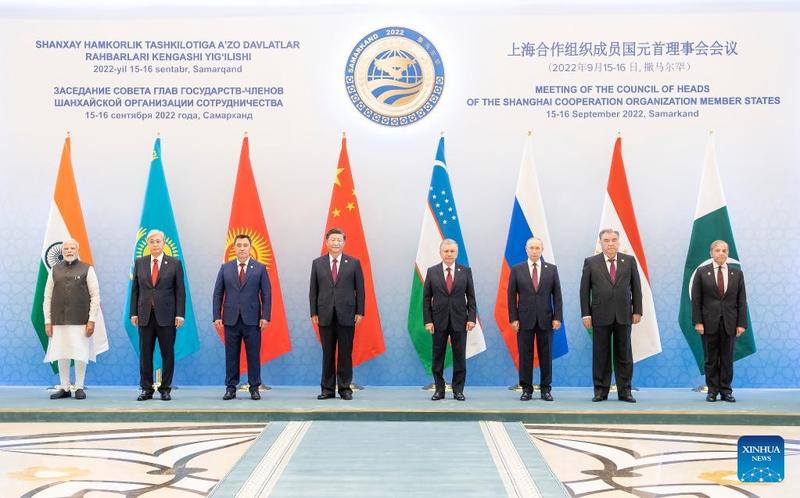 Chinese President Xi Jinping (fourth from left) poses for a group photo with other leaders of the Shanghai Cooperation Organization member states before the restricted session of the 22nd meeting of the Council of Heads of State of the SCO at the International Conference Center in Samarkand, Uzbekistan, Sept 16, 2022. (LI TAO / XINHUA)

President Xi Jinping has called for Shanghai Cooperation Organisation countries to strengthen solidarity and cooperation, uphold true multilateralism and work together to improve global governance to ensure the international order is more just and equitable.

Delivering a speech at the 22nd meeting of the Council of Heads of State of the SCO in Samarkand, Uzbekistan, on Sept 16, Xi said the SCO, as an important positive force in international and regional affairs, should brave the turbulence of the international situation, keep abreast of the trend of the times and boost partnerships to advance the building of an even closer SCO community with a shared future.

The SCO should remain firm in safeguarding the United Nations-centered international system and world order based on international law, practice the common values of humanity and reject zero-sum games and bloc politics, he said.

“Obsession with forming a small circle can only push the world toward division and confrontation,” Xi said.

He called on the SCO countries to increase support for each other, expand security and development cooperation, strengthen cultural and people-to-people exchanges and uphold multilateralism.

“We should guard against attempts by external forces to instigate ‘color revolution’, jointly oppose interference in other countries’ internal affairs under any pretext, and hold our future firmly in our own hands,” he added.

Analysts hailed Xi’s speech, saying his call for the world to shun a Cold War mentality and zero-sum game and uphold the Shanghai Spirit to ensure common and comprehensive security answers the needs of our times.

The global community needs to acknowledge China’s unwavering support in terms of offering public goods such as the Global Security Initiative and the Global Development Initiative, which featured extensively in Xi’s remarks at the summit and will deepen cooperation and enhance people-to-people and cultural exchanges, he said.

Colin Mackerras, professor emeritus at Griffith University in Australia, said that what struck him about Xi’s speech was its positive tone as well as the focus on equality, common values, exchanges and multicultural appreciation for many civilizations.

“We’re getting an emphasis on unity from President Xi Jinping, as opposed to the divisiveness that seems so prevalent with much of the rest of the world today, and especially the United States. I regard this emphasis on unity and equality as an extremely good thing,” he said.

Mackerras said Xi called for stability, cultural exchanges and equality among nations and the practice of the common values of humanity.

“He was very clear in his desire to safeguard the United Nations-centered international system and the (world) order based on international law,” the professor said, adding that Xi “maintained the long-held international desire to oppose terrorism, separatism and extremism”.

During his speech, Xi stressed the need for SCO members to carry out joint anti-terrorism exercises and severely crack down on terrorism, separatism, extremism, drug trafficking as well as cyber and transnational organized crime.

“We should effectively meet the challenges in data security, biosecurity, outer space security and other nontraditional security domains,” the Chinese president said.

Saying that “delivering a better life for people of all countries in the region is our shared goal”, Xi called on SCO countries to pursue the China-launched Global Development Initiative, which aims to focus global attention on development, foster global development partnerships, and achieve more robust, greener and more balanced global development.

He stressed the importance of better protecting international food and energy security, saying that China will provide developing countries in need with emergency humanitarian assistance of grain and other goods worth 1.5 billion yuan ($214 million).

Xi also underscored the need to speed up regional economic integration, and called for ensuring implementation of the road-map for SCO member states to expand shares of local currency settlement, better develop the system for cross-border payment and settlement in local currencies as well as work for the establishment of an SCO development bank.

Next year, China will host an SCO ministers’ meeting on development cooperation and an industrial and supply chains forum, and will set up the China-SCO Big Data Cooperation Center to create new engines of common development, Xi said.

Xi’s speech gave the right direction for SCO member states as well as others, said Gerald Mbanda, a researcher and publisher in Rwanda, stressing the values embodied in the Shanghai Spirit: mutual trust, mutual benefit, equality, consultation, respect for diversity of civilizations and pursuit of common development.

“President Xi’s call for security cooperation among member countries is indeed necessary given the current atmosphere of a Cold War mentality promoted by the US and its allies. China’s call for a Global Security Initiative is intended to address the peace deficit and global security challenges that prevail,” he said.

Mbanda added that Xi’s call for multilateralism as opposed to unilateralism is a clear testimony of advocating a global order based on consultation and consensus through which global challenges and ideological differences can be addressed, rather than by the use of force and bullying by strong nations.

Speaking of the development of the SCO, Xi said in his speech that China supports advancing the organization’s expansion in an active yet prudent manner.

“An increasing number of countries have applied to join our SCO family. This fully demonstrates the power of the SCO’s vision and the widely shared confidence in its future,” he said.

The SCO meeting concluded on Sept 16 with a declaration and four statements on upholding international food and energy security as well as secure, stable and diversified supply chains, and responding to climate change.

Leaders of the SCO member states signed a memorandum of obligations on Iran’s SCO membership during the meeting. The meeting also launched the procedure for Belarus’ accession, and admitted Bahrain, the Maldives, the United Arab Emirates, Kuwait and Myanmar as new dialogue partners.

Moreover, it adopted a Comprehensive Plan for the Implementation of the SCO Treaty on Long-Term Good-Neighborliness, Friendship and Cooperation for 2023-2027.

To promote cultural and people-to-people exchanges, Xi said in his speech that China will build a China-SCO ice and snow sports demonstration zone and host SCO forums on poverty reduction, sustainable development and sister cities next year.

In the next three years, China will carry out 2,000 free cataract operations in SCO member states and provide 5,000 human resources training opportunities for them, he added.

Imtiaz Gul, executive director of the Center for Research and Security Studies in Pakistan, said Xi’s emphasis on “win-win cooperation based on a consultative and cooperative approach” once again underlined China’s policy of peaceful coexistence and joint pursuit of common development.

Karori Singh, emeritus fellow and former director of the South Asia Studies Center at India’s University of Rajasthan, said Xi’s speech dispelled the apprehensions spread through Western media disinformation campaigns, by underlining the role and significance of the Belt and Road Initiative.

Salman Bashir, a former Pakistani ambassador to China, said Xi’s SCO speech was essentially about maintaining a rational view on development and security issues. “His focus on forging political trust, openness and equality and deepening cooperation and respecting each other’s core interests was of special value in a fraught situation,” Bashir said.

Furkan Halit Yolcu, a research assistant at the Sakarya University Middle East Institute in Turkiye, said Xi emphasized that the SCO was designed to be a constructive force, and that he highlighted the SCO as a platform for discussion and solutions.

He also noted that Xi proposed specific measures aimed at protecting regional peace and promoting mutual cooperation in trade and investment, infrastructure construction, supply chains and technological innovation to “deal with the global epidemic and trends that threaten world peace, including unilateralism and protectionism, and declining economic globalization, among other problems”.

Jan Yumul in Hong Kong and Chen Yingqun in Beijing contributed to this story.