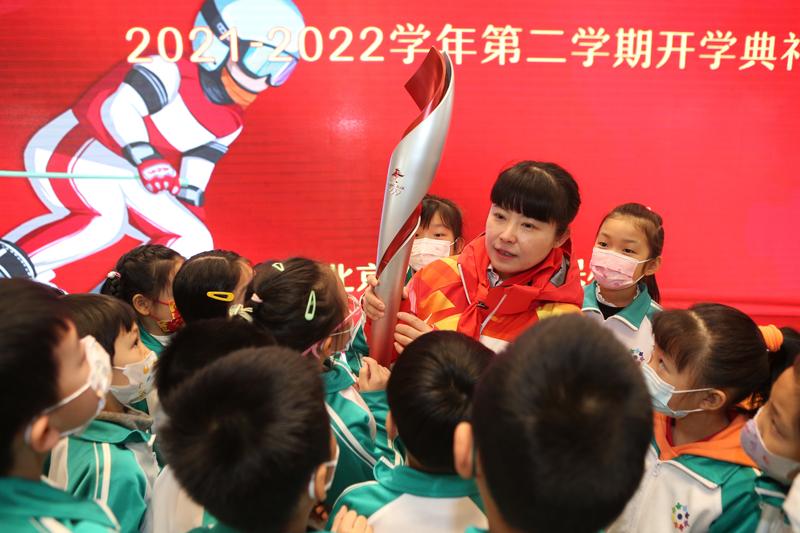 Liu Chaoying (center) attends the opening ceremony of a primary school in Beijing this year. (PHOTO PROVIDED TO CHINA DAILY)

Editor's note: To mark the 20th National Congress of the Communist Party of China, China Daily is producing 10 profile stories to show the changes in the subjects' fields in the past decade. This is the third of the series.

Ten years ago, when Liu Chaoying handled her first juvenile case, her focus lay on legal issues. Now, though, she is more concerned about whether her solution is conducive to helping the child and improving their future.

"Over the past decade, I've learned to think from the child's point of view while solving their problems through education and rehabilitation," said Liu, who specializes in juvenile cases at the Dongcheng District People's Procuratorate in Beijing.

Dealing with cases involving children not only means strictly abiding by the revised law, but also seeking the most suitable way to help juvenile offenders and victims return to normal life and have a brighter future.

A graduate of Capital Normal University, she became a prosecutor in charge of financial cases in July 2001. She started dealing with juvenile cases in 2012, when China added special rules designed to improve the methods of tackling offenses involving young people by amending the Criminal Procedure Law. At the same time, the procuratorate set up a new office for handling such cases.

"I was interested in the juvenile department, and I believed I could be competent at the job, because I was studying law as a major and was also a graduate in pedagogy," the 46-year-old said.

At first, she studied 11 new provisions in the new law, including the need to seal case files, the compilation of background reports on young offenders and ensuring that appropriate adults were present during questioning by prosecutors "as I thought juvenile cases would be resolved if there were no flaws in the application of the articles", she said.

She quickly discovered that it was not an easy job. "The method for solving child-related cases is different from the way we deal with ordinary offenses," she said. "Juveniles need us to be more patient and put their future as the top priority in handling their cases.

"Meanwhile, juvenile work isn't being done by prosecutors alone. Although the law provides higher requirements for prosecutors, it also demands that many experts from all walks of life, such as government agencies, schools, social organizations and businesses, join in."

Of the more than 100 children in cases Liu has dealt with in recent years, Ding Ding (not his real name) impressed her the most.

Before he was taken to Liu on accusations of theft in September 2016, the then 17-year-old boy from the Inner Mongolia autonomous region had been apprehended by police for pilfering more than 200 times and had been given administrative punishments, such as fines and detention, four times.

"It was not a difficult case because the evidence was strong enough to prove the teenager's guilt," Liu said.

In November 2016, the Dongcheng District People's Court sentenced Ding Ding to nine months in prison after being convicted of theft.

Even though the case had been concluded, Liu continued to assist the young man "as his post-prison future was my biggest concern", she said.

She remembers that the young man told her that he stole frequently because he was hungry and had no skills to earn a living. "It meant that if we didn't help him find a way to earn money, he might commit crimes again," Liu said.

She tried to contact Ding Ding's parents, in a bid to educate him through family care, but to her disappointment, he had lost contact with his mother a long time before, while his father, who often assaulted the young man, had died in an accident in 2013.

At the same time, the companies she contacted on Ding Ding's behalf were unwilling to hire him. "When I dealt with his case, I was so anxious because I had promised Ding Ding that I would provide him with a job opportunity. I didn't want to make a promise I could not keep," she said.

Armed with the good news, Liu met Ding Ding the day before his release from prison. She also decided to take him back to Inner Mongolia to help him register for an identity card, "as in this way, he would be able to get back on track more smoothly", she said.

Feeling her compassion and seeing all the things she had done for him, Ding Ding began to trust Liu implicitly, regarding her as his older sister and sharing his daily life with her via WeChat.

Liu called on her colleagues to order vegetables from the center to create opportunities to talk to Ding Ding and follow his development.

After working for about six months, Ding Ding began getting along with other people and became more confident in his life and work. One day, he told Liu that he planned to travel to Shenzhen, a manufacturing hub in Guangdong province, to try something different and see the wider world.

After he left Beijing, he often sent Liu information about his new job as a general worker in a local hotel and his new life.

In April 2018, Liu received a photo from Ding Ding, which showed that he had been named as one of the hotel's outstanding staff members.

"I was so moved and excited at that time," Liu said. "I knew that the pains I had taken over the boy had not been in vain, even if it took more time and I had to do extra work in addition to handling cases."

"Dealing with cases involving children not only means strictly abiding by the revised law, but also seeking the most suitable way to help juvenile offenders and victims return to normal life and have a brighter future."

Since Liu joined the juvenile department, she has dealt with more than 500 cases involving minors, providing assistance for over 100 children.

"I love my job, and I like reading child-related books and talking to those also engaged in juvenile work nationwide," she said. "What makes me even happier is that more social workers, psychologists and employers have joined our team to protect minors. I'm not working alone."

In addition to the increasingly stronger joint efforts, she said she has also initiated public-interest litigation against or sent judicial suggestions to government agencies or businesses with poor performances in child protection, aiming to play a bigger supervisory role in the sector.

With regard to her own family, she smiled and said: "I'm lucky. At night, when I reply to text messages or receive calls from children I have helped, my husband gives me the time and room to deal with them. He also shares his own ideas with me about some juvenile cases.

"I've also learned a lot from my 14-year-old son. He shares his thoughts about school and friends as well as what the young generation is thinking, which often enlightens me and helps me understand more about juveniles involved in my cases."