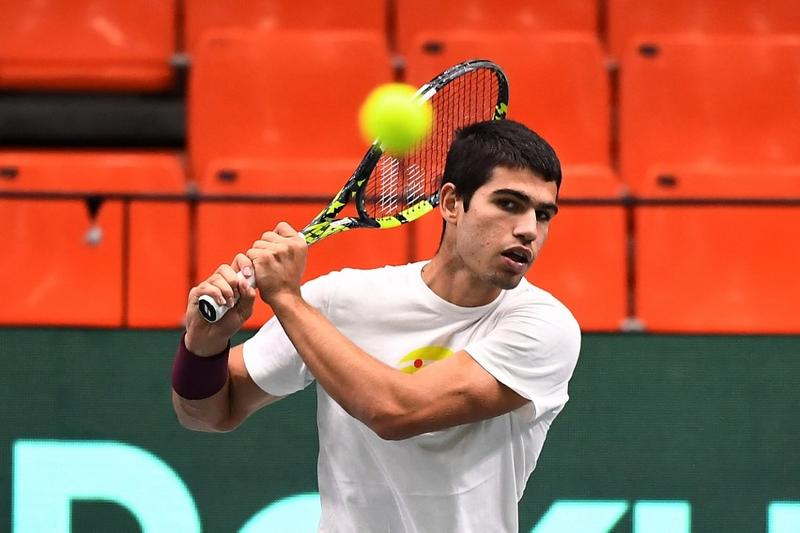 Spain's tennis player Carlos Alcaraz returns the ball during a training prior to the upcoming Spain's Davis Cup tie, at the Fuente San Luis sports hall in Valencia on Sept 15, 2022. (JOSE JORDAN / AFP)

Having become the youngest player to top the men's world rankings, 19-year-old Carlos Alcaraz is already plotting to make sure his stint as world number one is a long one.

The Spaniard climbed to the top of the ATP rankings this month when he claimed his maiden Grand Slam title at the US Open at Flushing Meadows.

"One of my goals is to finish (the year) as number one," Alcaraz was quoted as saying by the ATP website.

"Now that I've got there, my goal is to stay as many days, weeks and months as possible. We're going to work for that."

Alcaraz and fellow Spaniard Rafa Nadal, who won the Australian and French Open titles in 2022, are the only players to have sealed their spots for the ATP Finals in Turin

Alcaraz and fellow Spaniard Rafa Nadal, who won the Australian and French Open titles in 2022, are the only players to have sealed their spots for the ATP Finals in Turin.

The season-ending tournament on the men's tour is played between the top eight singles players and doubles team and Alcaraz has his eyes set on it.

"You have to do what you have been doing, feel comfortable with what you do, enjoy yourself, be happy on court, play tennis - and that is what I'm going to do. That's the secret for me. To try and forget everything else and enjoy playing tennis."

"I congratulate Alcaraz for winning the US Open," Djokovic, who missed the US Open as he has not been vaccinated against COVID-19, said on the sidelines of the Laver Cup in London.

"He did it in an incredible fashion ... He's 19 years old and already No 1 in the world. I mean, it's quite amazing what he has achieved so far.

"He's a great addition to our sport, a great star in making. Well, he's already realized the Grand Slam champion, so we can't speak about him as future, because he's already a present."