Arab backing for Israel ties wanes with concerns over Palestine 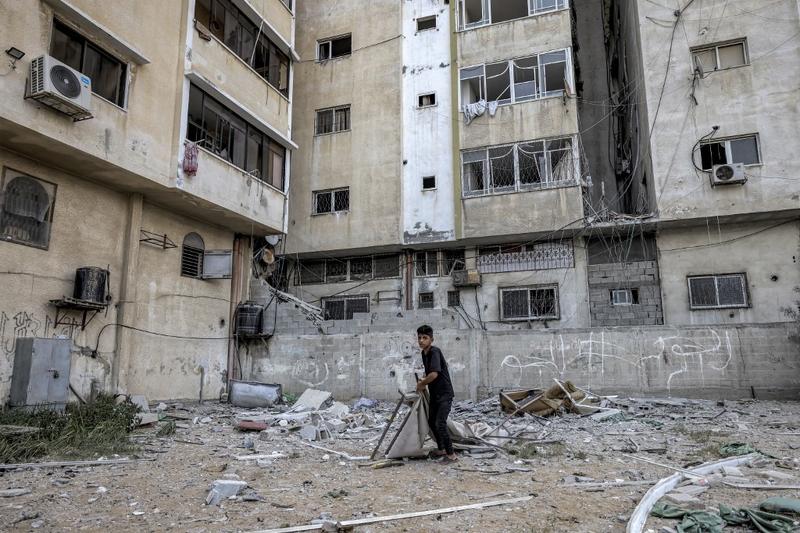 A boy inspects damage caused by an Israeli air strike in the vicinity of the 'Palestine Tower' in Gaza City, on Aug 6, 2022. (MAHMUD HAMS / AFP)

Backing for the warming of relations between Israel and some Arab countries appears to be waning amid popular support for the Palestinian cause, according to experts.

Haydar Oruc, a Palestine-Israel analyst and former researcher at the Center for Middle Eastern Studies in Türkiye, said it was unrealistic to expect that the normalization of ties with Israel by some states would spread across the Arab world without support from the people.

A survey conducted by US think tank The Washington Institute for Near East Policy, or TWI, which was published in July, found that public support for the normalization of ties with Israeli has declined sharply in three Gulf states

In September 2020, the United Arab Emirates, Bahrain, Sudan and Morocco signed the Abraham Accords which normalized relations with Israel.

On Sept 7, two years into the agreements, the Emirates News Agency reported that bilateral trade between Israel and the UAE amounted to $1.21 billion during the first half of 2022  –  a 117 percent increase compared with the first six months of 2021, when the figure stood at $560 million.

Amir Hayek, the Israeli ambassador to the UAE was quoted as saying that in the next two to three years, the UAE could be one of Israel’s top 10 trading partners.  According to the US-based non-profit the Abraham Accords Peace Institute, bilateral trade between Israel and Bahrain in the first seven months of 2022 reached $6.2 million, constituting a near 2,000 percent increase from the first seven months of 2021.

Similarly, Morocco saw a jump to $24.3 million, constituting a 16 percent increase in trade from the first seven months of 2021.

However, a survey conducted by US think tank The Washington Institute for Near East Policy, or TWI, which was published in July, found that public support for the normalization of ties with Israeli has declined sharply in three Gulf states.

TWI said that the survey, which was carried out in March, demonstrated that the percentage of those who view normalization favorably in Saudi Arabia, Bahrain and the UAE “has dropped over the past year to a minority view”. 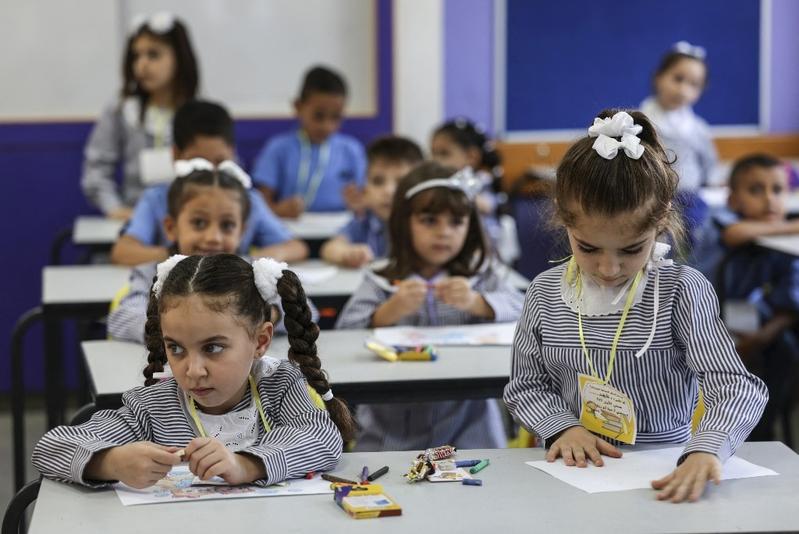 Palestinian pupils attend class on the first day of the new academic year in schools run by the United Nations Relief and Works Agency for Palestine Refugees in Gaza city, on Aug 29, 2022. (MAHMUD HAMS / AFP)

Because everyone knows that in order for Israel to fully normalize with the Arab world, first of all, the disagreements with the Palestinians must be eliminated. To reach this target, the Palestinians must attain their internationally recognized, equal, and independent state within the scope of the two-state solution

Likewise, it said, attitudes have hardened in countries where the Abraham Accords were initially unpopular.

Furthermore, the percentage of those in Lebanon who see the accords in a “very negative” light has increased from 41 percent in November 2020 to 66 percent in March, while support in Egypt has dropped from about a quarter to 13 percent.

“The most important reason for the decrease in the support given to the normalization process with Israel in the research conducted among the Arab peoples is that Israel does not include the Palestinians in this process,” said Oruc.

“Because everyone knows that in order for Israel to fully normalize with the Arab world, first of all, the disagreements with the Palestinians must be eliminated. To reach this target, the Palestinians must attain their internationally recognized, equal, and independent state within the scope of the two-state solution,” he said.

Belal Alakhras, a political analyst and Palestinian researcher at the University of Malaya in Malaysia, said that the majority of Arabs have consistently considered the Palestinian cause as an Arab issue.

The experience of normalising relations between the Israeli occupation and countries, particularly Arab and Muslim ones, suggests that Israel will continue its expansionist ambitions regardless, said Alakhras.

“Following the recent surge in normalization, Israel has also killed over 500 Palestinians and expanded more than 50 settlements in the West Bank, while the Gaza Strip remains blockaded,” he said.

In March, Michael Lynk, the UN Special Rapporteur for the situation of human rights in the Palestinian territory occupied since 1967, called on the international community to accept and adopt the recent findings in his report that apartheid is being practised by Israel in the Occupied Palestinian Territories.

And on Aug 31, Palestinian Prime Minister Mohammed Ishtaye called on the US not to block Palestine's bid for full membership of the United Nations.

In 2012, the UN General Assembly granted Palestine non-member observer state status. The remarks came after media reported in Israel that if Palestine's bid was brought to the UN Security Council, the US would use its veto.

Mohammad Abualrob, an assistant professor and chairperson of the Department of Media at Birzeit University in the West Bank, said he believes that most Arab regimes who normalize relations with Israel “are not elected and do not represent the people’s opinions and desires of those countries”.

“I do think that normalization will continue to be in the regime and (on) the political and economic level but it will not be moved to a popular level,” Abualrob said.