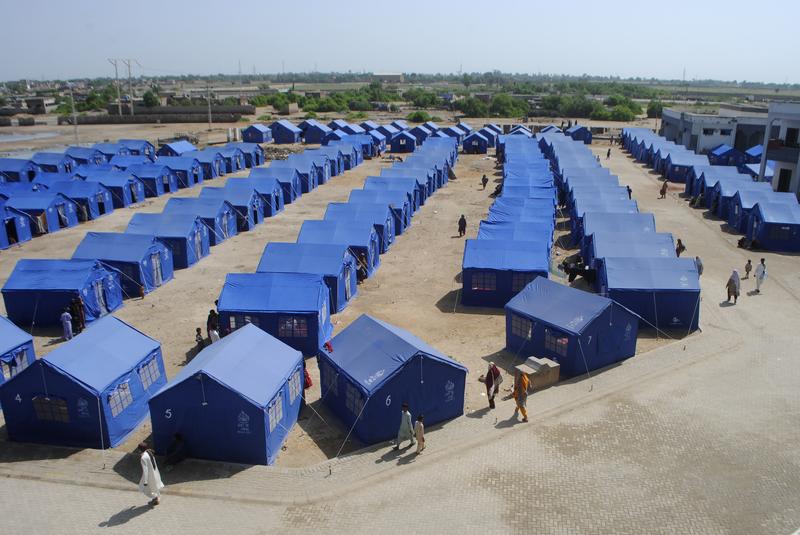 Climate justice for developing nations has become a hot topic again as devastating floods in Pakistan have killed more than 1,300 people, including over 400 children, injured over 12,000 and left thousands homeless in the South Asian country in recent weeks.

Amina Khan, director of the Centre for Afghanistan, Middle East and Africa at the Institute of Strategic Studies Islamabad, said Pakistan produces less than one percent of the global carbon emissions, but it is one of the top 10 countries that are most affected by the effects of climate change.

Amina Khan, director of the Centre for Afghanistan, Middle East and Africa at the Institute of Strategic Studies Islamabad, said Pakistan produces less than one percent of the global carbon emissions, but it is one of the top 10 countries that are most affected by the effects of climate change

Sherry Rehman, Pakistan’s minister of climate change, said over the weekend that rich countries that are predominantly to blame for the climate disaster should pay reparations to the developing nations that are bearing the brunt of extreme weather.

“There is so much loss and damage with so little reparations to countries that contributed so little to the world’s carbon footprint that obviously the bargain made between the global north and global south is not working,” she told The Guardian newspaper in an interview.

“Not only Pakistan but some other countries, too, are getting affected by the climate disruption to which they do not have much contribution,” he said. “There is need of a mechanism to put united effort internationally to handle climate change in the developing world.”

Recent floods in Pakistan have affected more than 33 million people, according to Pakistan’s National Disaster Management Authority, or NMDA. The United Nations has said that over 1.1 million houses have been damaged or destroyed in Pakistan and that more than 470,000 displaced people are living in camps.

Pakistan's meteorological department said over the weekend that rain and thundershowers in some parts of the country over the next few days could trigger landslides.

Pakistan suffered 188 percent increase in rainfall throughout this season until Aug 28, in comparison to the average rainfall over the last three decades, the NDMA said earlier, adding that the 30-year-average rainfall in Pakistan had been 135 mm but it went up to 390mm during the monsoon season this year.

South Asia is one of the world’s global climate crisis hotspots. People living in these hotspots are 15 times more likely to die from climate impacts, UN Secretary-General Antonio Guterres pointed out at the end of last month.

“Pakistan is awash in suffering. The Pakistani people are facing a monsoon on steroids — the relentless impact of epochal levels of rain and flooding,” Guterres added in a video message as he issued a call for emergency funding for Pakistan to help it cope with the flood disaster.

The UN chief highlighted the urgency of addressing global climate change. “As we continue to see more and more extreme weather events around the world, it is outrageous that climate action is being put on the back burner as global emissions of greenhouse gases are still rising, putting all of us — everywhere — in growing danger,” he said. 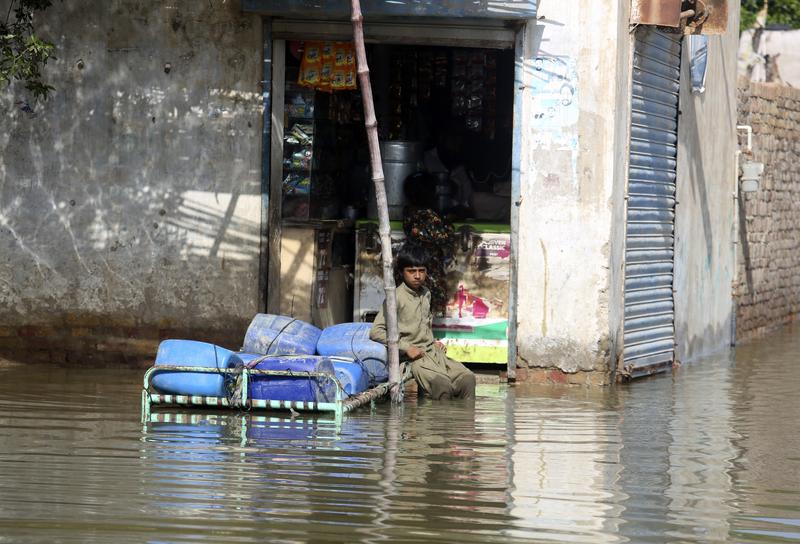 A victim of unprecedented flooding from monsoon rains sits in front a shop in Jaffarabad, Pakistan on Sept 5, 2022. (FAREED KHAN / AP)

Guterres urged the world community to step up in solidarity and support the people of Pakistan in their hour of need, and “stop sleepwalking towards the destruction of our planet by climate change”.

“Today, it’s Pakistan. Tomorrow, it could be your country,” he warned.

As the UN urged the international community to take urgent, collective action to help Pakistan, humanitarian assistance has been flowing from both the Chinese government and Chinese enterprises.

“Since the beginning of the floods, the Chinese side has stood with Pakistan and made every effort to provide relief assistance,” Mao Ning, a Chinese Foreign Ministry spokesperson, said on Sept 5.

She noted that the Chinese government promptly sent urgently-needed supplies, including tents to Pakistan, and that the Red Cross Society of China offered donations to the Pakistan Red Crescent Society.

“Subnational governments, organizations and people in China have all expressed their sympathies and support in various ways,” Mao added.

According to her, based on Pakistan’s needs, the Chinese government has decided to provide additional disaster-relief supplies worth 300 million yuan ($43.2 million) on top of a 100 million yuan emergency humanitarian assistance.

Also, the Chinese side has put together 200 metric tons of vegetables, and the China Meteorological Administration is providing Pakistan with weather forecast and technological support.

“A ruthless disaster can bring out the best of humanity,” Mao said, “We are ready to maintain close communication and cooperation with the Pakistani side to fully implement all assistance arrangements and help the affected people overcome the floods and rebuild their homes.”

China Mobile Pakistan, a subsidiary of China Mobile Communications Corporation, has offered free calling minutes to its users in flood-affected areas of Pakistan.

A statement released last week from Zong, a brand name of China Mobile Pakistan, said, “Zong understands the difficult times that the nation is going through and we are here to make sure that you remain connected with your loved ones. We are offering free minutes daily for flood-affected citizens.”

Salman Bashir, a former Pakistani ambassador to China, said the magnitude of destruction of the flooding in Pakistan is immense, and that China’s help is very valuable.

“We have always found Chinese people’s solid and heartfelt support for Pakistan at all difficult times,” Bashir told China Daily. “Pakistanis are grateful for China's most valuable help that is now being extended to meet the humanitarian catastrophe caused by severe flooding.”

Khan, from the Institute of Strategic Studies Islamabad, said that Pakistan will need a more global humanitarian effort.

"We had pledges, and … relief efforts have come in to Pakistan, but we need much more than that,” she said. “We are grateful to China of course, which is standing by us in this difficult time.”