China accused of predatory lending but it is the West and its institutions that are the actual culprits: Experts. 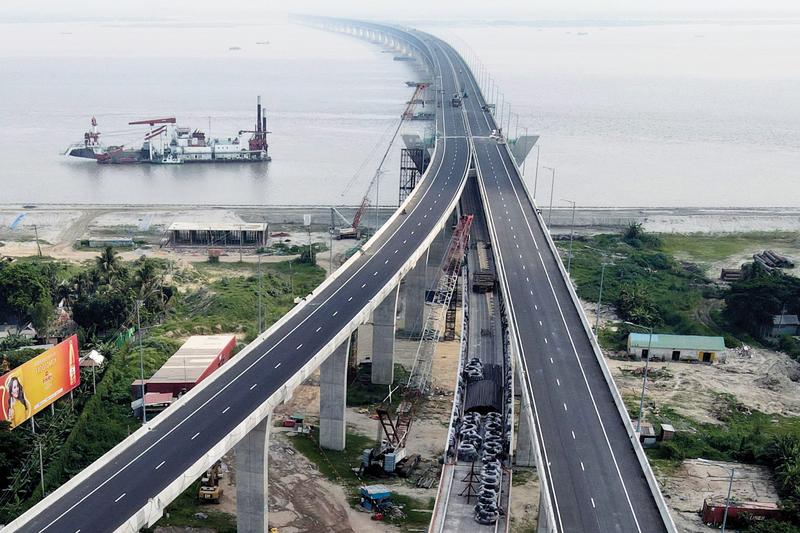 An aerial view of the Padma Multipurpose Bridge and railway project in Louhajang, about 40 kilometers from Dhaka, capital of Bangladesh, in June. (MUNIR UZ ZAMAN / AFP)

The United States and the West often accuse China of leading developing countries into so-called debt traps, but studies show that if anyone is creating such traps it is Western countries and financial institutions, analysts say.

In an article in The New York Times on Aug 16, Sri Lankan writer Indrajit Samarajiva said his country’s economic and political collapse had largely been the result of Western debt traps.

Western media have accused China of luring Sri Lanka into a debt trap, he said, “but from where I’m standing, ultimate blame lies with the Western-dominated neoliberal system that keeps developing countries in a form of debt-fueled colonization”.

And despite Western claims of Chinese predatory lending, only 10 to 20 percent of Sri Lanka’s foreign debt is owed to China, Samarajiva pointed out.

“We died in a largely Western debt trap,” Samarajiva said.

Ehizuelen Michael Mitchell Omoruyi, executive director of the Center for Nigerian Studies at the Institute of African Studies at Zhejiang Normal University, said that China has made many commitments in Africa in recent decades to cancel debts.

In August, Beijing announced that it will waive 23 interest-free loans for 17 African countries that had matured by the end of last year.

“China has offered a variety of debt restructuring options to help African countries tide over their difficulties, rather than using asset seizures and other means to require borrowers to pay off their debts,” Omoruyi said.

He cited a report of the China-Africa Research Initiative at Johns Hopkins University that said China restructured or refinanced about $15 billion of African debt between 2000 and 2019, without asset seizures.

Following the outbreak of the COVID-19 pandemic, the World Bank and the International Monetary Fund have urged the G20 to establish a Debt Service Suspension Initiative.

Since it entered into force in May 2020, countries eligible for the debt moratorium, most in Africa, had taken part in the initiative before it expired at the end of last year.

Those involved in the initiative have shown a diversity of creditors in recent decades, Omoruyi said.

Overall, borrowing has been mainly from Paris Club official creditors as well as private banks and multilateral institutions, and China.

In 2020, China was the most significant debt relief provider in this initiative. It suspended $5.7 billion in debt payments, contributing to more than half of the total global debt moratorium. Through this action, 45 percent of debts owned by the poorest countries to China were suspended.

In contrast, the United Kingdom suspended no payments on its commercial loans and recovered $3.2 billion in debt from countries that applied for the debt standstill initiative.

China seeks to differentiate itself from the prescriptive and hierarchical approach of other external actors by emphasizing political equality and mutual benefit, Omoruyi said.

“As such, Belt and Road Initiative (BRI) finances are not a debt trap that nations may fall into, but through the BRI finances African nations are getting out of the trap of no development.”

A report issued by Tsinghua University in Beijing in July said that from 2023 to 2025 African countries will enter a bond repayment peak with hundreds of billions of dollars in bonds maturing, and they face default risks, affecting dozens of low and middle-income bond-issuing countries, because of the “reckless operations” of large European and US investment institutions in Africa.

Tang Xiaoyang, a professor in the Department of International Relations at Tsinghua University, said the US subprime mortgage crisis of 2008, coupled with the European debt crisis, had led to the diversion of large amounts of private financial capital from the West to developing countries.

The report found that in just 12 years after 2008, the stock of sovereign bonds (mainly Eurobonds) of all low- and middle-income countries rose nearly 400 percent to $1.74 trillion in 2020, accounting for more than 50 percent of these countries’ external debt.

“This is the first time they have issued bonds, so they are inexperienced, and under such circumstances they feel that everything is very good when the economy is on the rise,” Tang said.

Issuing bonds has helped solve some short-term problems for some developing countries that have vulnerable economic structures and lack financial risk management experience, but it may be difficult to deal with the adverse impacts of a global economic downturn.

Another report, titled “Reality Check: Falsehoods in US Perceptions of China”, issued by the Ministry of Foreign Affairs of China in June, said that the so-called Chinese debt trap narrative is used to defame and smear China.

These two types of institutions together hold nearly three-quarters of the debt, making them Africa’s primary creditors.

The debt issue is, in essence, a development issue and the key to resolving it is in ensuring that the loans deliver real benefits, the report said.

The Nairobi Expressway project built by Chinese companies in Kenya through a public-private partnership has created more than 6,000 local jobs and benefited more than 200 subcontractors and several hundred local suppliers.

China also attaches great importance to the debt sustainability of projects. In 2017 it signed the “Guiding Principles on Financing the Development of the Belt and Road ” agreement with 26 countries taking part in the BRI.

In 2019 China unveiled the Debt Sustainability Framework for Participating Countries of the Belt and Road Initiative.

The framework takes into account the debt situation and the repayment ability of debtor countries, and incorporates the principles of equal-footed consultation, compliance with laws and regulations, openness and transparency.

It aims to strengthen monitoring and assessment of the economic, social and livelihood benefits of the projects, and channels sovereign loans into areas with high yields, to ensure the long-term returns of the projects.

In terms of technical assistance, China is leading in international engineering, procurement and construction contracting projects.

“About seven to eight of the top 10 companies listed by the Engineering News Record, widely considered as the most authoritative academic research and ranking in the field of engineering and construction, over the past 10 years are Chinese companies,” he said.

Galib also said that when Chinese companies conduct international projects they usually bring in local subcontractors who can learn to undertake big projects themselves.

Financial assistance usually includes grants, soft loans, commercial loans and hybrid loans. Apart from grants, on which interest is not paid, other loans require recipient countries to pay a certain rate of interest and repay the loan within a certain time.

However, no matter what kind of loan agreement is signed, it is fully based on mutual negotiation between the lender and the borrower, and there is no possibility of a so-called debt trap and deliberate deception.

Those leveling the debt trap allegation deliberately ignore the fact that a lot of China’s lending is in the form of interest-free grants or soft loans, Galib said.

“The Belt and Road Initiative is not creating debt traps but opportunities for collaboration and development,” he said.

He cited the China-built Padma Multipurpose Bridge in his country, Bangladesh, which opened to the public in June, cutting travel times from parts of the southwest of the country to the capital Dhaka from seven to eight hours to as little as 10 minutes.

The bridge is expected to raise Bangladesh’s GDP by more than 1 percent a year, benefiting about 30 million people, the Centre for Policy Dialogue, a think tank in Dhaka, has said.

Also, a report last month by Debt Justice in the UK, based on computations from the World Bank International Debt Statistics Database, has revealed that just 12 percent of African governments’ external debt is owed to Chinese lenders, while 39 percent is owed to multilateral institutions, and 35 percent is owed to private lenders, excluding Chinese private creditors.

The Debt Justice calculations also show that the average interest rate on private sector loans is 5 percent, compared with 2.7 percent on loans from Chinese public and private lenders.