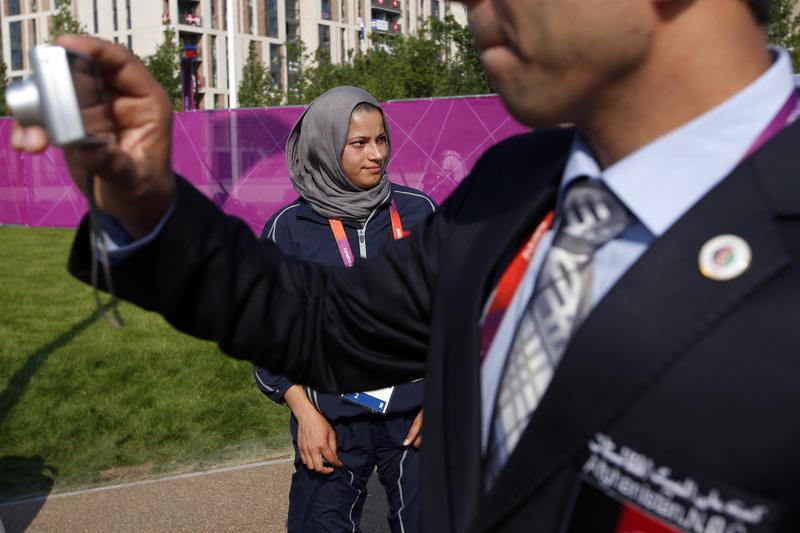 A man takes a photo near Tahmina Kohistani, Afghanistan's only female athlete, after attending the Olympic Team Welcome Ceremony at the Athletes' Village at the Olympic Park on July 26, 2012, in London. (JAE C. HONG / AP)

The Australian Olympic Committee said five Afghan families with "ties to the Olympic movement" had arrived in Australia in recent months following a 12-month project to bring them to safety.

Australia evacuated more than 70 Afghan athletes, family members and officials a year ago as the Taliban swept to power

In all, 31 family members had arrived in Australia – the first in early June and the most recent last week.

"For the families involved, the stress and uncertainty over this time have been enormous," AOC Chief Executive Matt Carroll said in a statement.

READ MORE: Female Afghan athlete makes plea for help to get to Tokyo

"Many have spent time in locations outside Afghanistan and it's wonderful to now have them on Australian soil. All arrived happy, if exhausted."

The AOC liaised with the Australian government to secure visas and flights for the Afghan arrivals while the International Olympic Committee provided financial support during their time in interim locations.

Yousofi thanked the Australian government and the AOC, and said she hoped to compete at next year's Olympics in Paris.

"It's been a journey for me but I am very happy to be here," she said. I am essentially starting a new life here," she added in a statement.

Australia evacuated more than 70 Afghan athletes, family members and officials a year ago as the Taliban swept to power.

Girls’ and women's sport has since been crushed by the Taliban government's hardline policies.

Men have continued to play sports at community and elite level in the country but women are effectively confined to their homes by a mixture of regulation and intimidation.

ALSO READ: Dream over for Afghan athletes trapped in Kabul

Abasy said in the statement that sport was the "natural right" of every human being.

"Unfortunately, now in Afghanistan, sports have a gender perspective and girls are denied the right to sports," he added.

"This is a great loss for the sport of Afghanistan and the world."