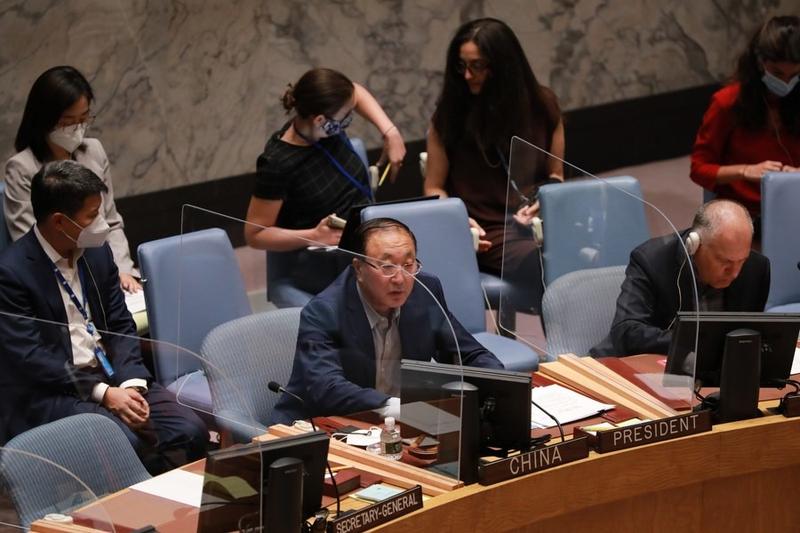 Zhang Jun (center, front), China's permanent representative to the United Nations, speaks at a UN Security Council meeting on the situation in Yemen at the UN headquarters in New York, on Aug 15, 2022. (XIE E / XINHUA)

UNITED NATIONS – Zhang Jun, China's permanent representative to the United Nations, on Monday called for fully implementing the truce agreement in Yemen, expanding the achievements of the truce and putting focus on improving the humanitarian situation.

"Since the start of the truce, civilian casualties caused by military operations have dropped significantly," Zhang said at the UN Security Council briefing on Yemen.

The ambassador, however, said that in places like Taiz, Marib and Shabwa, peace has not prevailed, and the security situation remains fragile.

"The parties concerned should fully and comprehensively fulfill their commitment to the truce, avoid all attacks on civilians and civilian facilities, make full use of the mechanism of military coordination committee to maintain regular communication, and address issues through dialogue and consultation," he added.

The parties concerning the Yemen truce agreement should fully and comprehensively fulfill their commitment to the truce, avoid all attacks on civilians and civilian facilities, make full use of the mechanism of military coordination committee to maintain regular communication, and address issues through dialogue and consultation.

On expanding the achievements of the truce, he said that "we call on all Yemeni parties to seize the window of opportunity presented by the extension of the truce, and work with each other towards the progress on opening roads in Taiz and other governorates, paying civil servants salaries, increasing international flights at Sanaa airport and other issues that have a bearing on people's livelihood and well-being."

"We welcome the progress made by the Yemeni government and the Houthis on the detainees’ exchange," he said, adding that "we hope that the parties to the conflict will fully demonstrate their political will and flexibility and, through the mediation of special envoy (Hans) Grundberg, strengthen consultations and reach an early agreement on expanding the truce agreement."

Turning to the humanitarian situation, Zhang said that as a result of shrinking international assistance and resource input, the UN aid projects in Yemen are facing the pressure of funding shortfalls.

He noted that since the beginning of summer, many places in Yemen have been hit by floods, leaving tens of thousands of people homeless and the situation in refugee camps in Marib is particularly acute.

"China calls on the international community to take immediate actions and provide the basic daily necessities and the medical supplies to the people affected to prevent a large-scale humanitarian catastrophe," he said. "All Yemeni parties should also facilitate and coordinate with humanitarian operations."

Zhang underscored that the situation in Yemen bears on the peace and stability in the Gulf region.

"And the key to security and stability in the Gulf region lies in the hands of the countries themselves," he said.

"China encourages regional countries to work with each other towards the same direction in a step-by-step manner on the basis of mutual respect to address their respective concerns through equal-footed consultations. Countries outside the region should provide useful support for the peaceful settlement of the Yemeni issue," the envoy said.

"China has always stood for respecting the sovereignty and territorial integrity of all countries and abiding by the purposes and principles of the UN Charter. We will always stand with the Yemeni people and continue to work with the Gulf countries and the international community to make greater contributions to the Yemen peace process," he added.