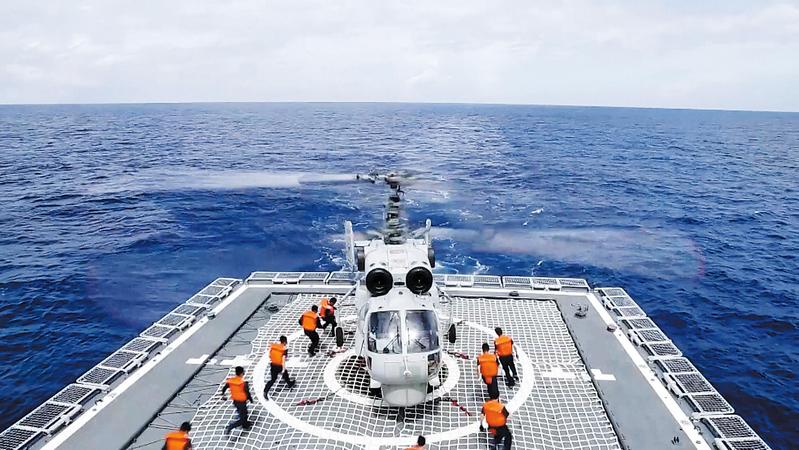 A helicopter of the Eastern Theater Command of the Chinese People’s Liberation Army takes part in joint combat exercises and training in the waters and airspace around Taiwan on Aug 8. (PHOTO PROVIDED TO CHINA DAILY)

The Communist Party of China is committed to the historic mission of resolving the Taiwan question and realizing China’s complete reunification, said a white paper issued on Aug 10.

As China has embarked on a new journey to build a modern socialist country in all respects, it is necessary to issue a new white paper on national reunification, a spokesperson for the Taiwan Work Office of the CPC Central Committee said in a statement on Aug 10.

Amid the current complex international and cross-Straits situation, the release of the white paper is also conducive to exposing “Taiwan independence” separatist forces’ collusion with external forces in making provocations and their attempt to undermine China’s sovereignty and territorial integrity, the spokesman said.

In 1993 and 2000, the Chinese government published white papers on Taiwan. And for decades, the one-China principle has been a basic norm of international relations confirmed by UNGA Resolution 2758.

Explaining what the one-China principle means, Vice-Foreign Minister Ma Zhaoxu stressed: “That is, there is but one China in the world, Taiwan is part of China, and the Government of the People’s Republic of China is the sole legal government representing the whole of China.”

And all along, China has held that peaceful reunification and “one country, two systems” are the basic principles for resolving the Taiwan question and the best approach to realizing national reunification.

“We are ready to create vast space for peaceful reunification, but we will leave no room for separatist activities in any form,” the white paper said, adding that the use of force would be the last resort taken under compelling circumstances.

State Councilor and Foreign Minister Wang Yi said the white paper aims to send the most authoritative message to the world about the Taiwan question.

As the situation across the Straits is still developing, Wang called for staying vigilant about the United States, which might not be resigned to its failure on the Taiwan question, and may gang up with others to add fuel to the flames by expanding military presence in the region to escalate tensions in an attempt to create new, bigger crises.

He called for keeping a watch on “Taiwan independence” forces, who might miscalculate the situation and redouble their efforts to collude with external forces to willfully go further on the path of splitting the nation.

He also underlined the need to be wary of politicians from certain countries who might attempt to follow suit in performing political stunts based on their political interests. Such acts would severely damage the political foundation of foreign countries’ diplomatic relations with China as well as having an impact on the United Nations Charter and the international system established after World War II, he added.

In the wake of US House Speaker Nancy Pelosi’s visit to China’s Taiwan region, over 170 countries and international organizations have condemned the visit as a serious, reckless and irresponsible provocation and expressed their commitment to the one-China principle.

Political leaders and heads of social organizations from many countries have criticized Pelosi’s visit. In messages addressed to the International Department of the Communist Party of China Central Committee, they said it was a grave infringement upon China’s sovereignty and territorial integrity and a breach of international law and the basic principles governing international relations.