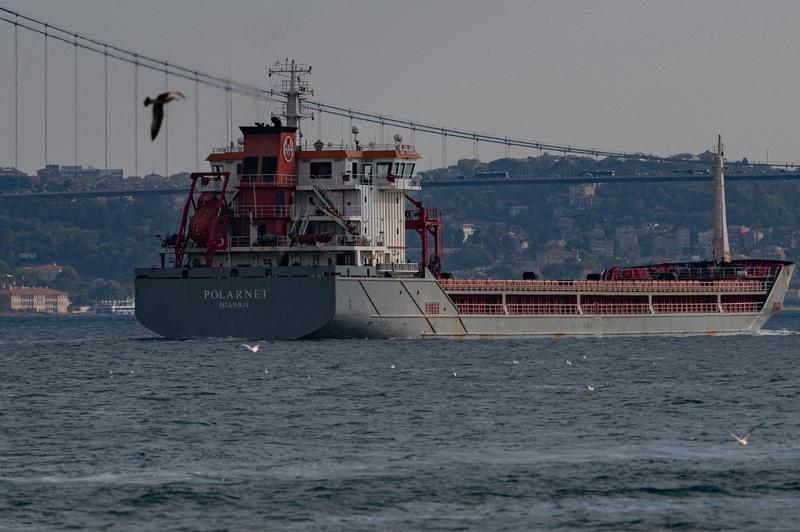 Turkish-flagged ship Polarnet carrying tons of grain from Ukraine sails along the Bosphorus Strait past Istanbul on Aug 7, 2022, after being officially inspected.

ISTANBUL – The first ship carrying Ukrainian wheat to be exported under a UN-brokered deal arrived in Istanbul on Sunday, the Joint Coordination Centre based in the Turkish city said.

The Sormovsky was loaded with 3,050 metric tons of wheat and had left Ukraine's port of Chornomorsk on Friday

The Belize-flagged vessel is the first to carry wheat from Ukraine through the Black Sea since Russia's special military operation in Ukraine began. The Sormovsky was loaded with 3,050 metric tons of wheat and had left Ukraine's port of Chornomorsk on Friday.

It was the first shipment of wheat from Ukraine, which, along with Russia, accounted for nearly a third of global wheat exports before Feb 24, when the Russia-Ukraine conflict started.

A total of 18 ships have now departed from Ukraine over the past two weeks, following the deal with Russia to allow a resumption of grain exports from Ukraine's Black Sea ports, after they were stalled for five months due to the conflict.

The agreement, brokered by the United Nations along with Türkiye, was reached last month amid fears that the loss of Ukrainian grain supplies would lead to severe food shortages and even outbreaks of famine in parts of the world.