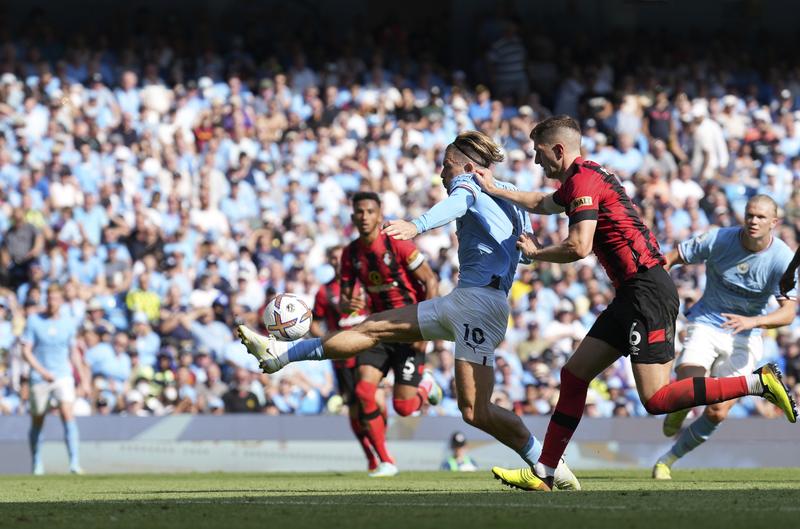 LONDON - Harry Kane scored a 96th-minute equalizer to give Tottenham a point with a 2-2 draw away to Chelsea, before things exploded when both coaches were sent off for an incident after the final whistle.

Chelsea played excellent football and led though Kalidou Koulibaly's 19th-minute volley, only for Pierre-Emile Hojbjerg to level for Spurs with 22 minutes left.

Reece James put Chelsea in front again in the 77th minute, but Kane saved a point for the visitors as he flicked home from a corner.

Chelsea complained about fouls before both of Tottenham's goals, and Thomas Tuchel's frustration appeared to spill over at the final whistle when he seemed to squeeze Spurs' coach Antonio Conte's hand extra hard in their post-game handshake and refuse to let go

Chelsea complained about fouls before both of Tottenham's goals, and Thomas Tuchel's frustration appeared to spill over at the final whistle when he seemed to squeeze Spurs' coach Antonio Conte's hand extra hard in their post-game handshake and refuse to let go, promoting Conte to react angrily and for them both to be shown red cards.

Earlier in the day, Nottingham Forest claimed their first Premier League win in 23 years as Taiwo Awoniyi scrambled the ball home to give them a 1-0 win at home to West Ham.

The Nigerian was in the right place on his full debut, but Forest needed heroics from goalkeeper Dean Henderson, who saved a second-half penalty from West Ham's England international Declan Rice.

On Saturday, Manchester United's start to the new season under Erik ten Hag went from bad to worse when they lost 4-0 away to Brentford.

United put in a pathetic display and were four goals down after 35 minutes as Josh Dasilva, Mathias Jensen, Ben Mee and Bryan Mbuemo took advantage of what was United's worst 45 minutes in a very long time.

Ilkay Gundogan, Kevin de Bruyne and Phil Foden wrapped the game up inside 37 minutes, with Jefferson Lerma's own goal with 15 minutes remaining completing the scoring.

The Brazilian put Arsenal 2-0 ahead with goals in the 22nd and 34th minutes, and although William Saliba's own goal after 53 minutes gave Leicester hope, that was immediately canceled out by Granit Xhaka's strike.

Brighton and Newcastle United drew a tactical game 0-0, with Brighton having slightly more of the play, while Fulham defended well to draw 0-0 away to Wolves, and the newly-promoted side would have won if striker Aleksander Mitrovic had scored an 81st-minute penalty.

Southampton scored two goals in the last 20 minutes to come back from 2-0 down at home to Leeds United, who had led thanks to Rodrigo Moreno's goals in the 46th and 60th minute. Joe Aribo gave the Saints hope in the 71st minute, and Kyle Walker-Peters equalized from a tight angle with nine minutes left.

Finally, Aston Villa got their first win of the season with a 2-1 victory at home to Everton, but lost Philippe Coutinho and new signing Diego Carlos to injury.

The round of games finishes on Monday when Liverpool entertains Crystal Palace.